That's high praise for the third baseman, especially since he last played at Double-A.

Share All sharing options for: Baseball America: Garin Cecchini could 'challenge' for roster spot in spring 2014

Garin Cecchini is one of the top prospects in the Red Sox system, but even knowing that, Baseball America's latest take on him seems optimistic. They sent scout and former college coach Therron Brockish to the Arizona Fall League to profile various prospects, and the series kicked off with Cecchini  -- Brockish thinks Cecchini could "challenge" for a spot on the Red Sox roster as early as spring training 2014, despite his only playing half-a-season at Double-A to this point.

That's not entirely impossible -- Jackie Bradley Jr. ended up winning a spot due to David Ortiz's injury last spring, with essentially equal high-minors time to Cecchini's. It is the most optimistic thing we've likely read about Cecchini, though. Well, outside of the rest of this profile, anyway.

Brockish grades Cecchini's tools well, but might go a little overboard by giving him a 70 bat on the 20-80 scouting scale. Brockish states that Cecchini's approach is so advanced that you normally only see it out of the likes of Dustin Pedroia or Albert Pujols, and he likens him to a potential Wade Boggs type. No offense to Cecchini, a player whom I have a lot of faith in, but that's just setting people up for disappointment: Boggs is a Hall of Fame third baseman who made it on base over 300 times in six different seasons of his career, and finished with a 131 OPS+ spanning nearly 11,000 plate appearances.

His power numbers haven't shown it yet, but I think he's a 15-20 home run guy in 600 MLB at-bats. I don't see him being a 35-homer guy but see him with a ton of doubles and definitely enough power production out of a third baseman. He's got an easy swing, but it's more of a line-drive approach than one with a lot of loft. Over the course of a full major league season, he will probably hit 20 or so out of the park. Some of his power production may depend on how the wall in Fenway plays for him.

Cecchini could very well turn into a singles-and-walks batter who also happens to score enough doubles to bump that slugging percentage up into at least a league-average territory, but, like with other players who have an advanced approach and haven't tapped into their power yet, there's certainly potential for the kind of improvement Brockish is envisioning -- remember, Kevin Youkilis' career-high in homers in the minors was eight, and he only hit 30 total from 2001 through 2005. That's not to say Cecchini is Youkilis, but the two are certainly from the same (potential) family of patience breeding power. 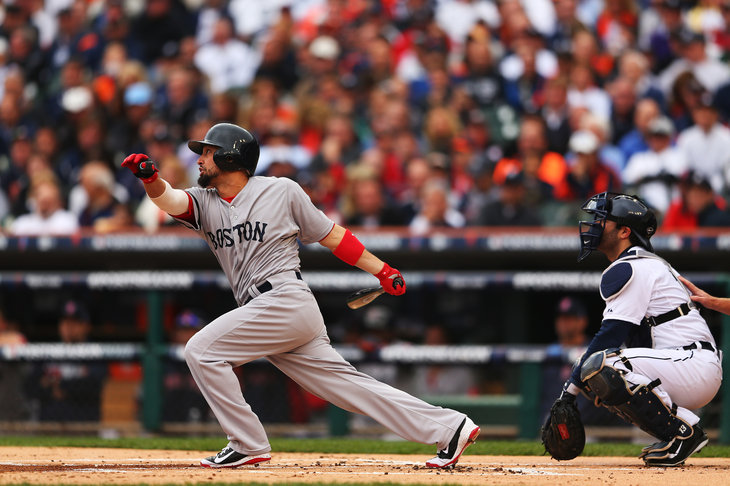 It is time for Torii Hunter and Shane Victorino to step it up. Win the match-up, win the game.

Don't take the above questioning to mean Brockish's report isn't worth your time: there is actually quite a bit of good information besides my feelings on what constitute reasonable offensive expectations. Cecchini's glove work impresses Brockish: he doesn't see an above-average fielder or anything of the sort, but he sees someone who cares about his defense and has worked to keep himself at the hot corner. While he's not a fast runner, his baserunning similarly gets kudos, as his instincts, jumps, and reads all help him with steals and advancing around the diamond.

Cecchini will likely spend 2014 at Double- and Triple-A, possibly skipping the former if he has a huge spring like Bradley Jr. did in 2013. It's entirely possible that all that Brockish wrote about Cecchini's bat comes to pass eventually, but until we see how he does full-time against high-minors pitching, it's tough to know just how quickly he'll adapt and thrive in the majors.