The Red Sox have been striking out at a jaw-dropping rate and with Justin Verlander on the mound, there is no end in sight. There is one Red Sox player known for his high-K ways who might not be phased by the former-MVP, however- 1B Mike Napoli.

Following the Red Sox incredible comeback in Game 2, the Tigers will send two-time Cy Young award winner and the 2011 MVP, Justin Verlander, to the mound to face John Lackey and a Red Sox lineup that has struck out 32 times in 18 innings. Verlander is coming off of a near no-hitter in the final ALDS game against the Athletics, and given the way the Red Sox have been swinging and missing, he might just be the first Tigers pitcher of the series to go from flirting with a no-no to taking one home for the night. Game 2 hero and postseason legend David Ortiz has seen Verlander the most of any Red Sox player and had some success against him, but the match-up that deserves the most attention will come one batter later when Verlander squares off against Mike Napoli.

has seen Verlander 28 times, second only to Ortiz and like Big Papi, and he has been successful in that small sample. The Red Sox first baseman has gone with 7-23 with a home run, five walks and five strikeouts against Verlander. faced the Tigers' righty just one time this season, back on June 23rd, and he went 1-3, singling in his first at-bat, then grounding out and lining out. As I have said in almost every match-up piece to date, small samples like these are not even slightly predictive and it is best not to put too much emphasis on such numbers. However, in the case of Justin Verlander against Mike Napoli, there is one fascinating oddity that might deserve some attention: to this point, has struck out far less than expected against Verlander.

Mike Napoli strikes out a lot. There is no getting around that fact. Among hitters who qualified for the batting title this season, his 32 percent strike out rate was the second highest in the game. Over the last four seasons, he ranks 13th in strikeout percentage. Making contact just isn’t his game. He hits for tremendous power and does an excellent job controlling the strike zone and drawing walks, but he puts the ball in play far less than the average hitter. So it is surprising to see any selection of plate appearances in which he has a mere 18 percent strikeout rate. When that sample comes against one of the most prolific strikeout pitchers in the game, it is downright shocking, even in a small sample. Verlander struck out 23 percent of hitters he faced this season, the 15th best rate in the game and over the last four seasons only seven pitchers have posted a higher strikeout rate than the Tigers' ace. Against other power pitchers like Verlander, has struck out in just under 37 percent of his plate appearances and against righties, he has whiffed 27 percent of the time in his career. These results not only fail to lineup with our expectations for this specific match-up, but also with those for this type of match-up.

Is Justin Verlander right about Shane Victorino and HBP? 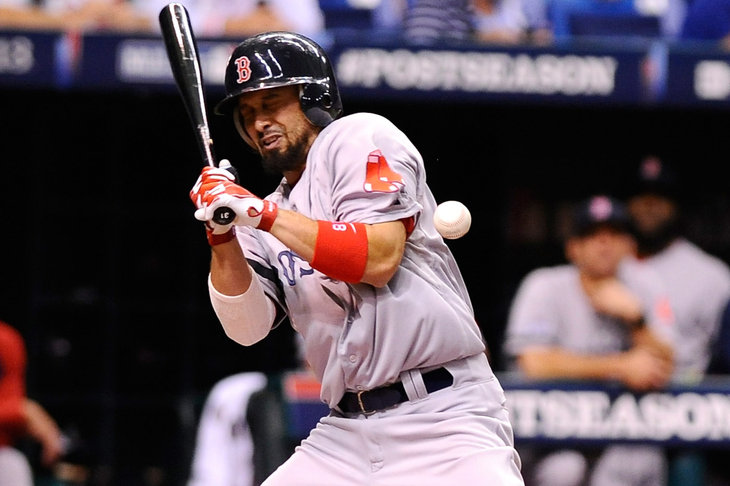 Luckily, it's 2013, so this is something we can actually verify or dismiss.

Looking at the history between these two players even more closely just makes the effect more puzzling. Of five times that has struck out against Verlander, three of them came in one game back on . Verlander was excellent in that game, holding ’s Angels to just one run over 8-1/3 innings on three hits and no walks with seven strike outs. Since that time, the two have faced each other nine times without a strike out.

Knowing the history between and Verlander can’t help us predict what will happen in Game 3 at all, really. Still, the match-up between is going to be extremely important. Dustin Pedroia has been the only Red Sox player capable reaching base consistently in this series and righty-mashing, human-highlight reel David Ortiz is probably the one player Verlander will seriously consider pitching around. That puts Mike Napoli in position to be the difference-maker in this game.

It is far more likely that the peculiarities of ’s numbers against Verlander are just noise and not any true indicator. Napoli has struck out in four of his six plate appearances in this series and Verlander has been as unhittable as ever over the past month, and that data is at least as relevant, if not more so. Furthermore, if Napoli were to strike out his next three times facing Verlander, the statistical oddity above would be no more and Napoli’s strike out rate against Verlander would drop back in line with both players’ career norms.  Even if there is only the slimmest of chances that ’s better-than-expected contact rate against Verlander is the result of his seeing the ball well when facing the Tigers’ ace or some other true skill, with the game potentially hinging on what Mike Napoli does, it certainly will be something to watch closely.  Napoli is going to have a chance to fight off regression for a few more at-bats and if he succeeds, it might be the difference in this game.