Is Justin Verlander right about Shane Victorino and HBP?

Luckily, it's 2013, so this is something we can actually verify or dismiss.

Share All sharing options for: Is Justin Verlander right about Shane Victorino and HBP?

The Red Sox will take on Justin Verlander in Game 3 of the American League Championship Series, so it was his turn to step up to the mic on Monday's off day. Verlander took the opportunity to say that Red Sox right fielder Shane Victorino goes out of his way to be hit by pitches in order to get on base.

"Anything on the inner half, occasionally he's looking to get hit," Verlander said. "He's up there, he's right on top of the plate. And his arms are over the batter's box and over part of the plate. If he doesn't get out of the way, there could be an occasion that it could be a strike and it actually hits him."

Verlander also mentions there are rules the umpires are aware of to stop this sort of thing, and places his faith in their doing their job correctly should it come up. At the same time, he also says he's "seen some pitches that he got hit on that were strikes", and Victorino hasn't been punished for that, so he's basically saying these same umps have not done their job to this point.

The rules, by the way, state that if a player is hit by a pitch in the strike zone, then they are not awarded first base. The same goes for if they do not attempt to get out of the way of a pitch, but as anyone who regularly watches baseball can attest, this is rarely invoked.

Has Victorino, who was hit by 18 pitches in the regular season and five this October, actually been hit by any strikes this year, as Verlander claims? That's a thing we can actually check, thanks to PITCH f/x and Brooks Baseball, and the research patience of our own Ben Buchanan. Here are the closest calls on hit by pitches from the entire 2013 season and postseason for Victorino.

The first possible strike Victorino was hit by all season long came on August 11 against the Royals and James Shields: 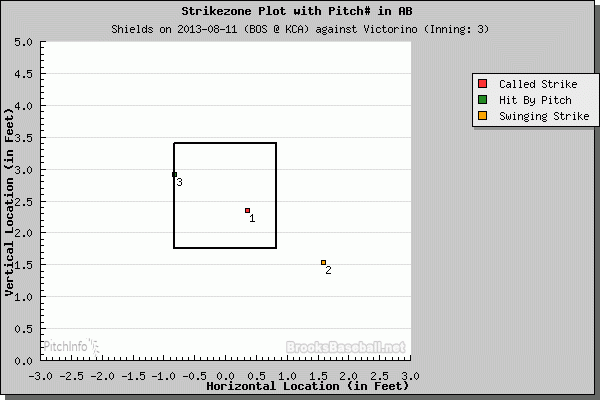 That's borderline, the kind of pitch Victorino could easily say looked like a ball and Verlander (or whomever) could say was a strike. The umpire said it was a ball, though, and Victorino was awarded first base.

On August 27, Victorino was struck by a pitch outside of the strike zone by Wei-Yin Chen, but let's be generous and assume this is the kind of offering Verlander was citing. 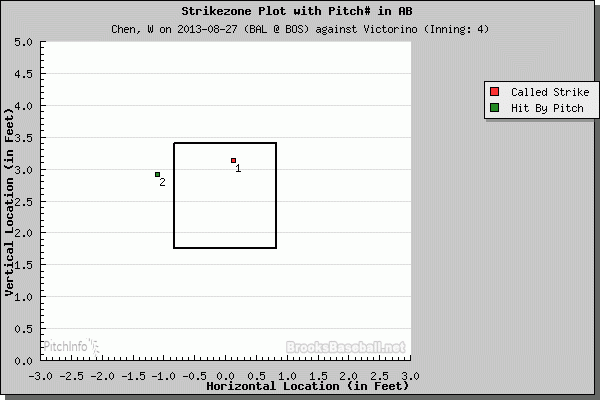 On September 13, there was another close-but-not-close-enough hit by pitch, this time against Hiroki Kuroda: 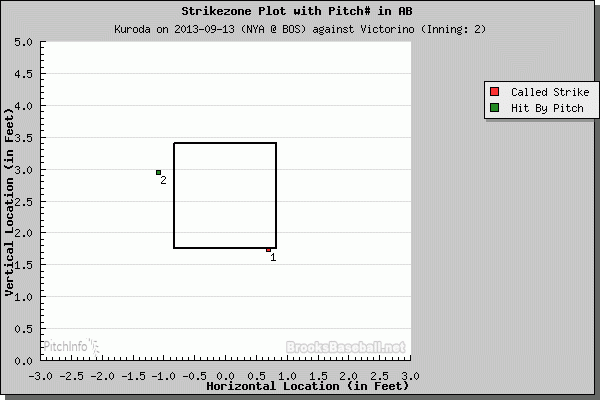 Then, on September 21, Toronto's Mark Buehrle nearly whacked Victorino with a strike, but again, nearly isn't the same thing as a strike. The umps Verlander defers to say so, as does this pitch chart: 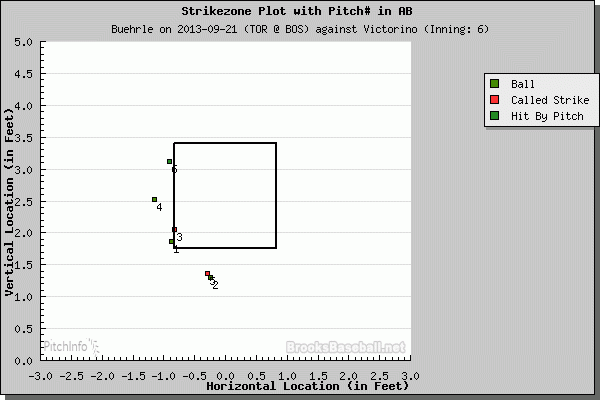 You might be noticing that these all occurred late in the season. Remember, there were no righty-on-righty match-ups for the switch-hitting Victorino until August, when he began to bat from the right side exclusively. It created more opportunities for hit by pitches -- legal ones, mind you, but opportunities nonetheless.

Victorino was hit by Rays' reliever Alex Torres on October 8, in what would turn out to be the deciding game of the ALDS: 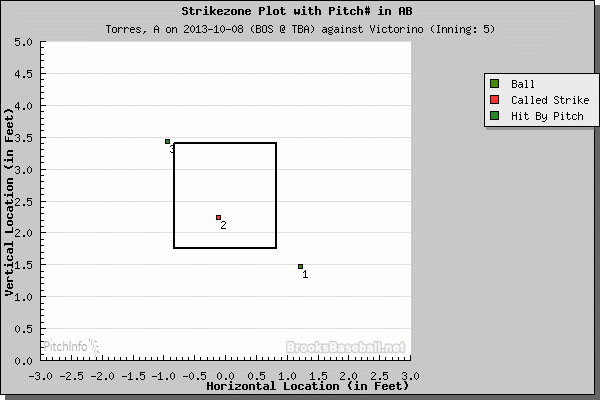 There have been no such questionably close hit by pitches for Victorino against the Tigers yet -- Max Scherzer's offering that struck Victorino was clearly a ball, and that's the only one to this point.

Don't take this rebuttal as a criticism of Verlander, or a call to get him to stop talking about what Victorino is doing. It's smart of him to remind the umpires that Victorino looks to get hit, because, let's be serious, part of the reason he stands so close to the plate is to occasionally draw that extra (and painful) base on balls. The thing is, though, that Victorino isn't doing anything outside of the rules of the game. What you see above are the closest, most questionable calls, and with one exception, they are all outside of the strike zone. If he's been hit 23 times, and the worst offender is borderline, it takes some of the power of Verlander's argument away, at least in terms of being able to criticize Victorino. To Verlander's credit, though, that's not even his aim here -- he just wants things called fairly, just like Victorino.