The two rotations in the ALCS have gotten a lot of hype, and for good reason. However, it seems like John Lackey has been forgotten, despite his consistently solid performances all season.

Even before the series started, it was evident that the Tigers boasted a terrifying a four-man rotation, especially with their first three pitchers. The Red Sox have gotten a big taste of that through two games, too, as they were completely baffled by both Anibal Sanchez and Max Scherzer to start the series. What's kind of lost in all the discussion of the Tigers' pitching staff is that Boston also has an impressive group of pitchers. They each got one turn in the last round against Tampa Bay, and the performances got most fans understandably excited. It's clear that Jon Lester and Clay Buchholz are the top two options on the staff right now, as both can be ace-like when they are on. However, after his last start, people are starting to put Jake Peavy in that conversation, too. While doing so, John Lackey is becoming a somewhat forgotten man, despite the fact that today's starter has been the most consistent arm on the team this year.

We all know how people felt about Lackey coming into the season, making him one of the poster boys of the team's recent failures. Coming off Tommy John surgery and one of the worst full-seasons by a starting pitcher in recent memory in 2011, it wasn't at all unreasonable to be wary of what the big right-hander would bring to the rotation this year. In fact, there seemed to be a chance that his spot could be taken by one of the young arms if things went downhill early. He started off the year with a short appearance in Toronto, lasting just four and a third innings. That would be tied for his shortest outing of the season -- the other one would be his fifth start of the year -- and he still managed eight strikeouts to just one walk in the outing, while allowing just two runs. Of course, he still picked up the loss, which was a theme for Lackey all season.

He finished the year with easily his best season since arriving in Boston, and probably his best overall performance since 2007. Despite finishing with a lackluster 10-13 record due to unimaginably unlucky run support, he was the most reliable arm this season. He wound up with a 3.52 ERA, which was well-supported by his 7.5 Ks per nine innings and 1.9 free passes per nine. That walk-rate is the best he's ever put up in his career, while the strikeout rate was his best since 2006. Even though Lester showed more flashes of greatness, he still had his rough spots, which is why Lackey ended the regular season leading him in ERA, strikeouts per nine and walks per nine.

Consistency is why Lackey was able to finish the year with such good numbers without really blowing anyone out of the water with his performances. Take a look at how he was able to pitch month-to-month.

The first number that jumps out is that ERA in September, which is a huge jump from the rest of the season. However, as you can see, he hitters didn't perform any better against him that month than they had earlier in the year, which indicates that the big jump had a lot to do with some bad luck. In fact, he still struck out 7.1 batters per nine innings, and walked just 1.8, which are just about in line with his full-season performance. At any point of the season, it was reasonable to expect John Lackey to keep the opponents' bats relatively quiet. 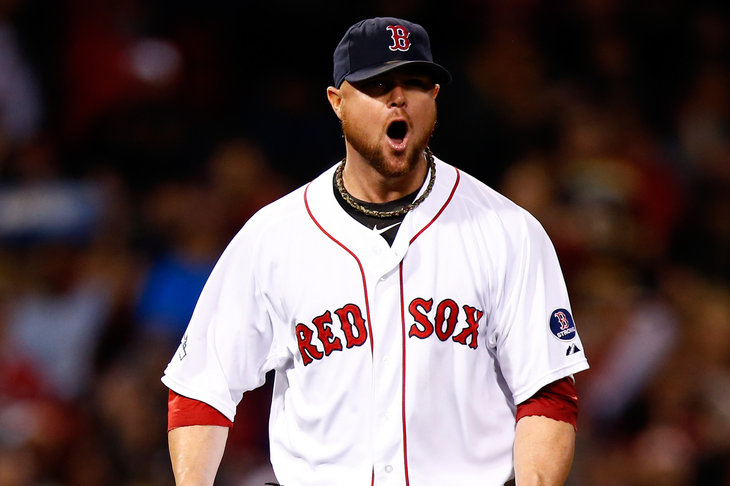 The longtime Sox lefty could be in for the long haul in Boston, but it all comes down to price.

Boston's number-three starter made 29 starts this season. In 14 of them -- just barely under half -- he was able to make it through seven innings. What's more impressive is that Lackey was able to record at least one out in the sixth inning pretty much every time out there, as he pitched just five innings or less three times this year, or in 10 percent of his starts. For comparison, Lester failed to record an out in the sixth in 18 percent of his starts, while Jake Peavy did so in 13 percent of his starts. For a team with as many problems as the Red Sox have had in the bullpen, avoiding implosions in his appearances was huge. Though it's an arbitrary distinction, five runs has always stuck out in my mind as the line between a decent and bad start for a pitcher. Of course, there are other circumstances which shape a bad start, but for a rough indication of how consistent Lackey was this year, five runs works. He only allowed five or more runs three times (10%) this year, while Lester did so seven times (21%), and Peavy did so five times (22%).

I'm not sure if it's because of his lackluster win-loss record, or because he gave up more runs than usual in the last month of the season, but it seems like John Lackey's performance this year is being undersold. If you're looking for upside, Clay Buchholz and Jon Lester are definitely your guys, and Jake Peavy has a high ceiling for every start, too. But if you're looking for a guy who will go out there and keep the batters on their toes for six or seven innings, John Lackey is the perfect man. Month after month, start after start, Lackey took the mound and did whatever the team needed from him -- even if the offense didn't always show their appreciation. He's been the model of consistency, and the Sox could use some of that as they arrive in Detroit.