The Red Sox have four of the Eastern League's top prospects according to Baseball America, including the top-ranked Xander Bogaerts.

These league-specific top-prospect lists can get kind of silly thanks to the nature of the minor leagues. Thus Xander Bogaerts' placement in both the International and Eastern League top-20 lists. The hilarious thing when looking at Xander through the lens of Double-A, though, is that he's still ridiculously young for the league--"the youngest of three 20-year-olds" in the league, as Baseball America puts it.

We don't need to rehash just how exciting a prospect Bogaerts is. His hype has only built as he's moved through the minor leagues, and nothing we've seen in his time with the Red Sox proper has done anything to diminish that. He's got patience, power, a nice swing, and seems composed as can be for a guy who's making his first big league and playoff appearances. The Red Sox have a special player, especially if Baseball America is on the money with this:

As for his defense, most evaluators expected Bogaerts would play just fine at shortstop, especially given his strong arm, baseball instincts and knack for positioning himself at the correct spot on the field.

A bit of a higher number for the on-base machine that is Garin Cecchini than we might have expected, and BA readily acknowledges that, with his minors-leading .443 OBP, he's going to hit. What holds him back is the glove:

The reviews on Cecchini's defense are just lukewarm. He has a slow first step and his throwing mechanics aren't smooth, though he does have a solid arm.

The fear with Cecchini, then, is that he's a "tweener" lacking the power for a corner infield/left field spot and the defense for, say, shortstop or (in Fenway) right field. Of course, it's all relative. If Cecchini is putting up Nava numbers at third base, most of us would be thrilled. And if he maybe follows the career path of a certain Greek God of Walks, well, no complaints. You don't need power to be good. 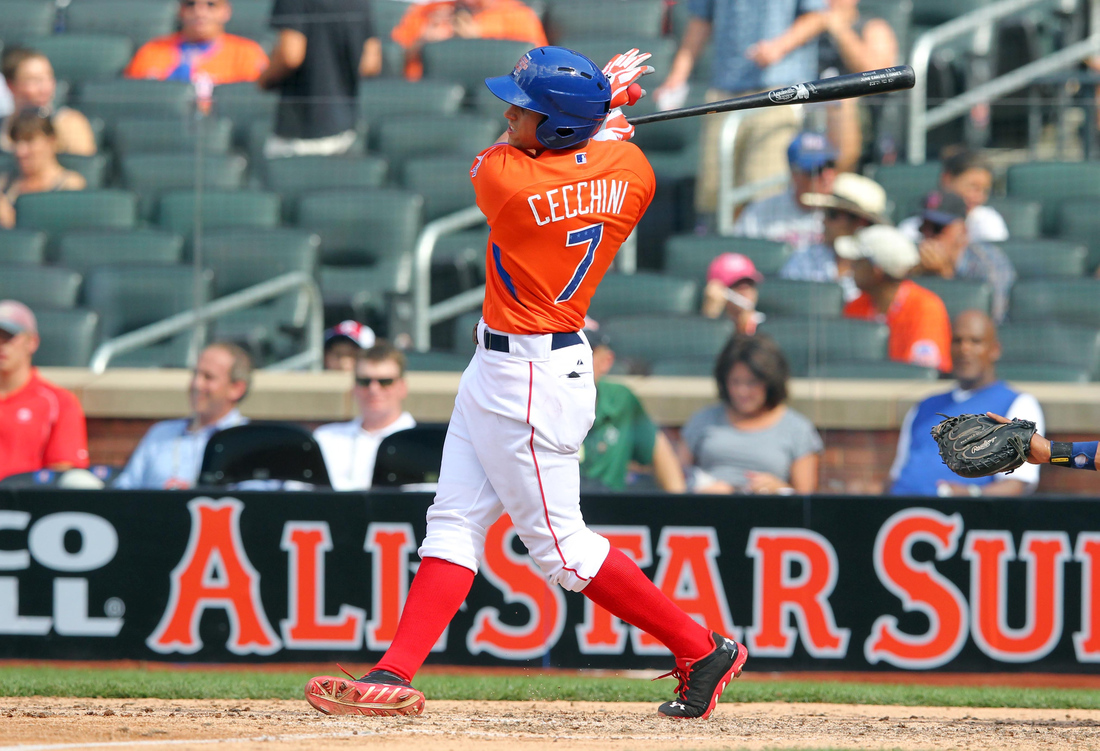 Ranaudo certainly reminded the baseball world why he was such a highly-valued draft prospect a few years back when he took the Eastern League by storm this year. And BA admits that, despite being in the bottom-five, he's got "a higher cieling than some pitchers on this list." But the question for Ranaudo remains whether or not he can stay healthy enough to reach that potential.

Also holding him back: an arsenal with inconsistent secondary offerings, and on-off fastball control. But it was still enough to keep his ERA under 3.00 in both the Eastern and International Leagues.

When talking about Brandon Workman, there's one question that really stands out: starter, or reliever?

Throughout his minor league career, he's mostly been penciled into the role of future bullpen arm. But so far with the Red Sox, his results in the rotation have been far superior. So what does BA think?

[An average changeup] plus his willingness to pitch inside, could be the key to him fulfilling his future as a No. 3 or No. 4 major league starter.

Workman's fastball sometimes flattens out, and he finishes his delivery by spinning over a stiff front leg. Even with those flaws, he has proved he can succeed in a set-up role.

Thanks, Baseball America! You've been a big help!