The longtime Sox lefty could be in for the long haul in Boston, but it all comes down to price.

Share All sharing options for: Red Sox could extend Jon Lester this offseason

The Red Sox have an option on Jon Lester for 2014, one they're reportedly set to pick up assuming Lester gets through the rest of the postseason healthy. In addition to that, though, they are reportedly going to work on an extension to keep his socks red, according to the Boston Globe's Nick Cafardo.

It might not be as simple as giving Lester an offer and having him sign it, however. Cafardo also reports that if the Red Sox can't lock Lester up at a discount, then the lefty will likely end up on the free agent market after the 2014 season. This doesn't mean Lester is unlikely to sign below market value, and it doesn't tell us what the Red Sox and Lester would consider to be a discount. It's just a fact that, like with Jacoby Ellsbury, if the Red Sox feel they're heading into mega-contract territory, an area they've developed a clear reticence for under general manager Ben Cherington, then Lester will be in another uniform after next season. 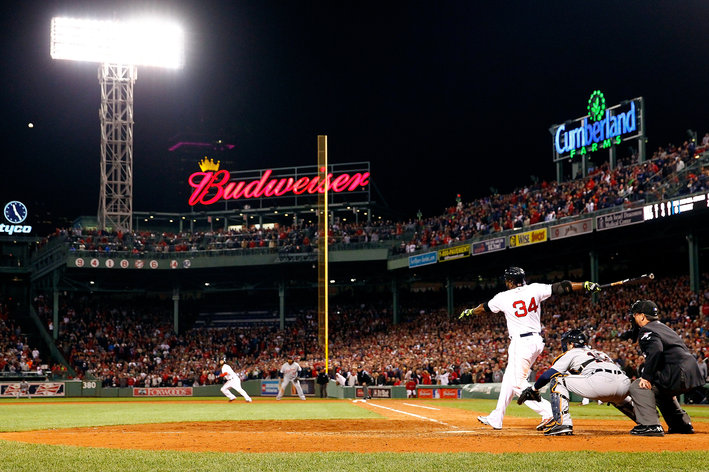 This is a hit you're going to want to see from every possible angle.

If Lester is willing to ink the pitcher version of Dustin Pedroia's lengthy extension, in which Pedroia signed for an average annual value of just $13.75 million due to his desire to stay and win in Boston -- hey, his words -- then obviously the Red Sox will be intrigued, and a deal will likely get done. If Lester is looking to fit snugly in the gap between that kind of contract and the $200 million deals that the likes of Justin Verlander, Felix Hernandez, and eventually Clayton Kershaw are getting, well, the two sides probably aren't on the same page.

It should be said, though, that, as a pitcher, his team-friendly deal will look differently than Pedroia's, should it come into being. The years would likely be shorter, and the AAV higher to compensate. What exactly that would look like -- five years, $85 million, a la John Lackey? -- and what Lester would think of it, are a bit of a mystery at present, however.