The Tigers and Red Sox have been rivals many times, but never in a head-to-head postseason match-up.

Share All sharing options for: Red Sox face the Tigers in the playoffs for first time ever

The Red Sox know their opponent for the American League Championship Series now that Game 5 is over and done with: spoiler, it's the Detroit Tigers. Whereas the Athletics would have presented a return to Sox history as a club they've faced in the postseason quite a few times in the last 25 years, the Tigers are the exact opposite: Boston and Detroit have never met on October's stage.

That might seem odd at first, considering both franchises are in the midst of their 113th season. It's not weird in the least, though, given the way these two clubs, due to the structure of the league for most of those 113 seasons, were forced to interact.

Back in 1901, when both clubs formed in their current iterations, the American League had eight teams. The Red Sox were the Boston Americans, and would stay that way through 1907, while the Tigers were named as such from the start. There were no playoffs until 1903, and even then, the World Series was all that was played, between the National League's top team and its Junior Circuit counterpart. The Tigers and Red Sox could never face each other outside of the regular season within this setup, not unless one of them switched leagues. As you likely gathered, they did not.

The two teams did basically run the American League for a stretch a century ago, however. The Tigers reached three consecutive World Series -- and lost all of them -- from 1907 through 1909, then the Red Sox won four World Series in four trips between 1912 and 1918. The Tigers would then fade from postseason relevance until the 30s, and the Red Sox until the 40s, with a smattering of return trips between the two -- including a Red Sox Series loss in 1967 followed by a Tigers' win in '68 -- until 1969, when the AL East and AL West formed with the introduction of two more teams, 12 in total. 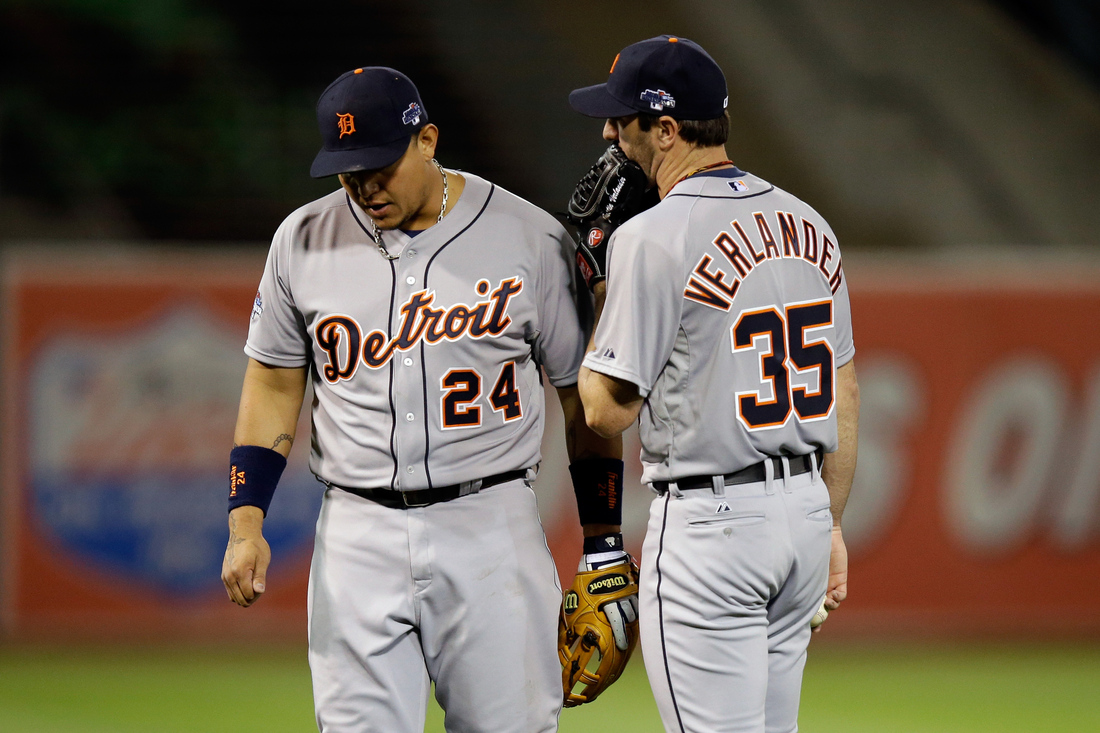 The Tigers' fate changed in the aughts and beyond with the help of these two special players (Photo credit: Ezra Shaw)

The Red Sox and Tigers were both in the AL East, and would stay in this alignment until 1994, when a third division in each league was introduced along with a wild card and an additional playoff round. Before that drastic shift, it was a little odd how the Red Sox and Tigers continued to subtly parallel each other with the other never far behind. The Tigers lost in the 1972, ALCS the Red Sox in the '75 World Series. The Tigers won the World Series in 1984, Boston lost their own attempt in 1986. The Tigers lost the 1987 ALCS, the Red Sox the '88 and '90 iterations.

They would diverge a bit under the new system, with the Red Sox making the playoffs by way of the division in 1995, and then via the wild card in 1998, 1999, 2003, and 2004. The Tigers were a miserable organization during this time frame as an AL Central club, with five last place finishes, two fourth place finishes, and 13-consecutive losing campaigns overall from the start of tri-divisional play through 2005. The Red Sox, as you know, reached three ALCS and won a World Series, their first since 1918, in this time. The Tigers would snap their streak of futility and reach the World Series in 2006, but would drop it to the Cardinals -- the same team the Sox defeated in 2004 -- with Boston taking the very next one against the Rockies, and then losing in the ALCS the next year to the Rays. The Tigers would continue the trend of shared-relevance that's existed between the two clubs since the beginning by losing the 2011 ALCS and then the 2012 World Series.

It's not a subtle parallel any longer, as these two teams find themselves facing off against an opponent they've often risen and fallen with, but never directly encountered. It took 113 years, or the entire lifespan of the American League, to get here, but that just makes this series all the more important historically.