Catcher Jarrod Saltalamacchia certainly isn't the obvious pick for team MVP but his case is fascinating and surprisingly strong.

The 2013 Red Sox outscored every other team in baseball and allowed the sixth fewest number of runs of any American League team. Their reward was a 97-65 record -- tied with the Cardinals for the best in baseball -- and their first trip to the postseason since 2009. One of the most enjoyable aspects of this season has been the way they have gotten key contributions so many players, giving fans a new hero every night. Despite a league-leading offense, they have just two players in the top 30 in fWAR and no one in the top 10. Their excellent rotation has just one pitcher in the top 30 in fWAR, and no one in the top 30 for ERA (among qualified starters that is: Clay Buchholz's 1.74 ERA is the best among players with at least 100 innings). This team has lacked a single dominate player, but every man has been a king.

As great as this type of team is, it doesn't make for a clear cut team MVP.  Typically, I don't enjoy MVP debates much. Recently, they always seem to be split between a player who leads in one (or all) of the advanced valuation systems and another player who either leads in more traditionally valued number or who has a powerful narrative that all too often involves putting enormous weight on things that simply cannot be quantified (or even known). The argument for the first is boring and the second is rarely ever convincing or well thought-out.

The debate over the Red Sox MVP doesn't suffer from these problems, however. There isn't even a clear leader in WAR. Baseball reference has Dustin Pedroia just ahead of Shane Victorino and Jacoby Ellsbury. Fangraphs flips B-R's top three to read Ells, Victorino, and Pedey. Baseball Prospectus' WARP leaderboard has Victorino, David Ortiz and  Pedroia ranking one through three -- and that's just position players. On the narrative side, Jonny Gomes and Mike Napoli brought the beards, Koji Uehara saved the bullpen and Daniel Nava out gritty-small-guy'ed a thousand David Ecksteins. There are many great cases to be made for team MVP and I am thrilled to layout the case for one player who  had an unusually dramatic impact on both sides of the ball: catcher Jarrod Saltalamacchia.

Saltalamacchia doesn't lead in any of the total value metrics out there. Fangraph's ranks him sixth in fWAR. Baseball-Reference is the harshest, ranking him eighth, and Baseball Prospectus has him the highest at fifth in WARP. More often than not, I think these numbers get it right within a more-than-acceptable margin of error and I will be the first to admit that based purely on the things we can measure well, Salty doesn't have the best case.

Don't get me wrong, his straight numbers should garner plenty of respect, as I discussed earlier this month. He was the fifth best hitter on the team by wRC+ ahead of Pedoria and Ellsbury (among players with at least 300 plate appearances). His .466 slugging percentage ranks third on the team. He ranks sixth in RBI and seventh in runs scored despite coming eighth in plate appearances. He actually drove in his teammates at the same rate as David Ortiz, plating 16.6 percent of runners. Having a catcher who hits .273/.338/.466 -- better than your average DH, first baseman or left fielder -- is extremely valuable. That value is included in the wins above replacement formulas through positional adjustments, but I have always felt the value of a plus-hitting catcher might be underestimated to some degree.

Salty's case is unique however, because the contributions of catchers still are still difficult to quantify and what he does behind the plate adds a tremendous amount to the team. That x-factor is what elevates him to into the same range of value as the more obvious candidates at the top of the leader boards. 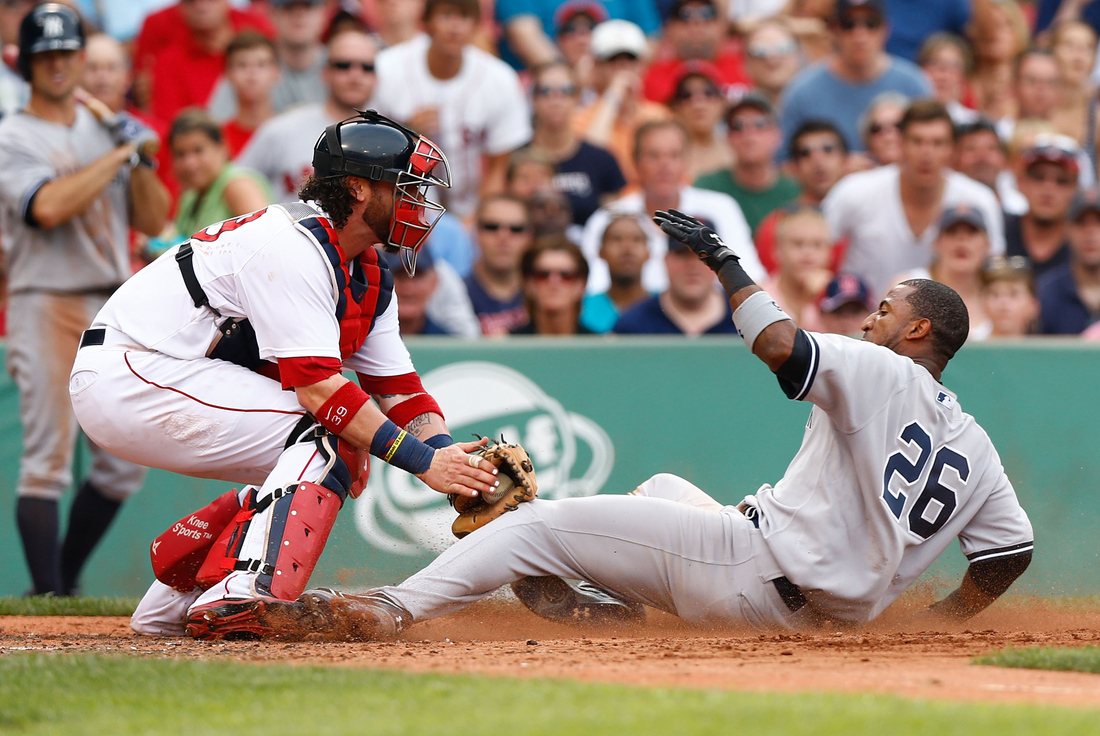 Saltalamacchia isn't Yadier Molina when it comes to controlling the running game, but his defense is often undervalued because of the emphasis that gets placed on that. He has caught just 21 percent of basestealers against a league average of 26 percent, allowing a league-leading 89 steals against him. That kind of obvious flaw is the most notable defensive skill associated with catchers and hurts his reputation, but it has less affect on his value than you might think, and is also partially the pitcher's fault, too. All those extra steals cost Red Sox pitching just four runs, and his efforts preventing passed balls and the general fielding of his position makes up for almost of that.

Where Salty truly excelled this season was in his ability to improve the results of Red Sox pitchers. Salty has been shown to be a plus talent at pitching framing, adding around 10 runs saved (or one win) to his value every season. That alone would be enough to bump him from the middle of the position player rankings into the company of easy-pick MVPs like Ortiz, Victorino, Ellsbury and Pedroia if it were added to some of the WAR calculations. He isn't an elite talent in this respect, but he's among the top 10, and given the playing time teams have handed to far lesser hitters like Chris Stewart and Jose Molina, that kind of performance is every bit as prized as offensive contributions right now.

Pitch framing alone isn't the only skill that Salty has flashed that isn't included in his WAR. His game-calling and management ability has drawn high praise from Red Sox pitchers this season. Speaking to Brian MacPherson of the Providence Journal, Jon Lester compared him to a quarterback, saying:

"They've got so much more responsibility than calling a play and running it. There's a lot of things going on within a game. He's got to be aware of all those and aware of us and what we're trying to do and game plans and what the hitter is trying to do. He's done a good job of adjusting to all of that."

"I'm a big game-plan guy...I really get sold in the couple days leading up to my start, get sold on what we need to do. To have a catcher who 100 percent buys into that and will go with it no matter what and then to converse - sometimes the lingo, the language isn't there, but we converse all game long with him and Juan - it's just been outstanding."

Game-calling and management abilities are still somwhat under-charted territory for the statistical analysis community. The overly-simplistic Catcher ERA tool has Saltalamacchia 10th among catchers with at least 3,000 plate appearances caught, and that is certainly respectable, but I don't draw any real conclusions from it. The improvement of the pitching staff this season should be largely credited to manager John Farrell and pitching coach Juan Nieves, but the player most responsible for translating their plan from the clubhouse and the dugout to the field is Jarrod Saltamacchia, and that should not be ignored.

AL Wild-Card Game: Rays vs. Indians, who you got? 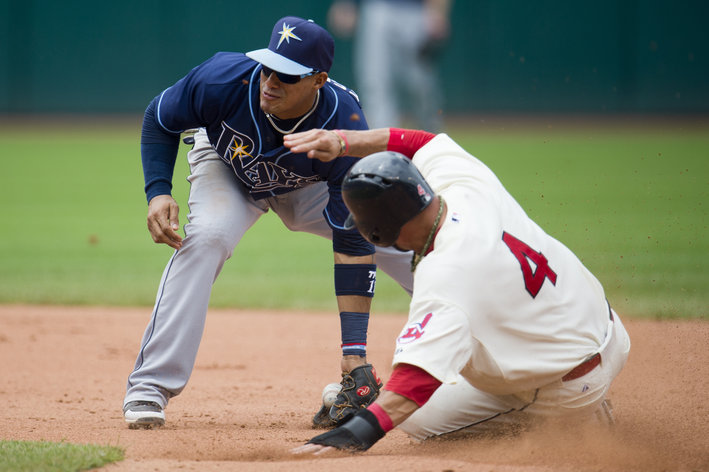 The Rays and Indians will put their seasons on the line as they go toe-to-toe in the American League Wild-Card Game Wednesday night. Who you got?

Given the work Max Marchi did on game-calling for Baseball Prospectus, there is evidence that a plus game caller can save between eight and 26 runs per season with that skill. I don't have numbers for Salty's work this year, but given the improvement in the staff, I don't think it is outlandish to put him at the low end of the good-game-calling curve adding potentially 0.8- 1.2 wins to his value. With that kind of relatively conservative bonus added to his numbers, Salty has very compelling case for Red Sox MVP in both the narrative and numbers departments.

With all of the incredible performances on the team this season, I wouldn't be surprised if Jarrod Saltalamacchia gets very little love in the team MVP debate. Being a catcher certainly isn't glamorous. It is a hard job that is easily overlooked and undervalued. Salty did it incredibly well this season. That deserves praise and possibly even a team MVP award.