The Legend Of Nick Punto

Bill Parker expounds on the legend of one of the least appreciated 2012 Red Sox: Nick Punto.

Share All sharing options for: The Legend Of Nick Punto

Nick Punto was a member of the Boston Red Sox for only about eight months. Only about five of those were months in which baseball is played. Of the Red Sox' 123 games during his tenure, Punto saw action in only 65. He performed very poorly in them, putting up a .200/.301/.272 line and (by Baseball-Reference's reckoning) contributing less than half a win to the team's cause.

To the Red Sox fan, as far as I can tell, this is who Nick Punto is -- a utility player, and a poor one, no different than Spike Owen or Julio Lugo or Luis Rivera was to the team. His claim to fame around here appears to be ironically lending his name to "The Nick Punto Trade," in which (at least on the coming-from-Boston end) he was by far the least significant part.

This is a grave injustice.

Punto was a Twin for seven seasons, which may be about how long it takes to fully appreciate the complexity, the contradictions, the rustic aroma and full-bodied flavor of Nicholas Paul Punto, man playing a boy's game in a boy's body.

Punto, as you certainly had time to notice, is really very, very small; listed at 5'9" and 190, we can posit that his height probably does begin with a five and that his weight likely starts with a one, but the rest is up for debate. He had (and has) the infuriating habit of sliding head-first into first base, and apparently h rips up teammates' jerseys after walk-off wins, which are the sorts of things that gave (and give) him a reputation around the game as a "gamer," "scrappy," and so on. Punto's jersey-ripping was even credited as an immeasurable contribution to team chemistry, which is weird, since it only happens after the game has been won.

The real legend of Nick Punto was probably birthed in 2005, his first full year with the Twins, when brilliant Twins blogger Batgirl (who has sadly retired -- here's her real-life author website) revealed a new character, Little Nicky Punto: Tiny Superhero: 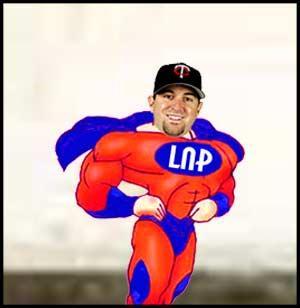 "I can fit into places others cannot!"

LNP's powers (mostly involving the little things, naturally, though he also possessed superhuman emotional intelligence) were great, but so were his weaknesses, as he was so tiny he was prone to be eaten by baseballs (there was a flash game to exactly that effect -- the user moved Punto around the screen so to avoid being eaten by a hungry baseball -- but it's lost to history, or at least to my searching abilities).

Batgirl may have left us, but our friends at SBN's Twinkietown refused to let the legend die. Here's a day in the life of Little Nicky. Here's a primer for the new Nick Punto employer (just prior to his signing with the Cardinals before 2011). Here's some inspirational poetry. Here he is with his new bike: 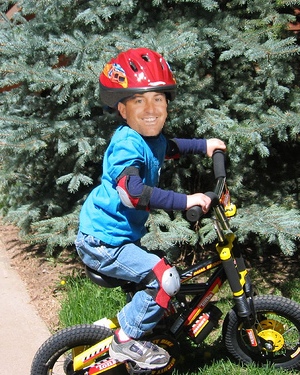 In a Twins uniform, Punto's abilities were just as great -- he was he was a hilarious but persistent bunter; he has twice made amazing baserunning gaffes in the playoffs (1, 2); he earned the undying love of Ron Gardenhire, regardless of his quality of play. And I don't have anywhere else to put this, but it must be mentioned: a Californian born and raised, Punto apparently met the minimum qualifications (name ending in a vowel, I assume?) to play for Team Italye in the 2009 World Baseball Classic.

On a real, much less fun level, Punto was one of the most divisive figures of his time in Minnesota sports -- easy to love if you're into guys who look like they're giving all they've got all the time, easy to hate if you were a fan of batting stats and couldn't figure out how he kept getting penciled into Twins lineups. Punto's value fell somewhere in between the two camps, with exceptionally strong skills (defense, patience, and baserunning, despite the high-profile goofs) and one exceptionally weak one (a total lack of power). That package could make for a really useful player when the singles were falling in, as they did in 2006, 2008, and 2011, or a pretty awful one when they were not, as in 2007, 2009, and 2012 in Boston.

Nicky Punto contains multitudes, as all of us do; it's a shame that Boston didn't get to see more of it, his only heroic contribution coming as part of the trade that freed up huge chunks of salary and may have saved the Red Sox' future. Following Punto is in turns terribly fun and awesomely infuriating, but it's never remotely dull; I assume Red Sox fans would rather have the metric ton of payroll flexibility, but think of all the excitement you'll be missing!

Bill Parker is one of SBN’s Designated Columnists and one of the creators of The Platoon Advantage. Follow him at @Bill_TPA.