Share All sharing options for: Three Series Left, And The AL Still Undecided

We checked in on the American League playoff race a week ago, and things were packed tightly, with eight of the 14 AL clubs within 4-1/2 games of a playoff spot. After a week off the Red Sox getting involved in things by playing the Rays and the Orioles, the AL is still bunched, though, it's starting to see some separation: 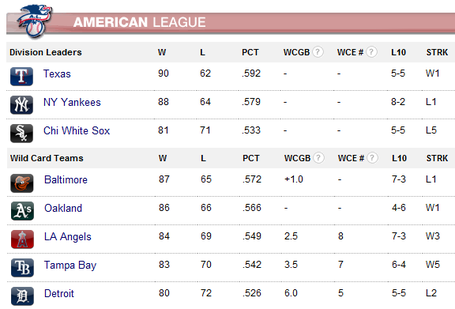 The Rangers, Yankees, and White Sox continue to lead their respective divisions. The Yankees and Orioles both lost on Sunday, but prior to that, they matched each other well enough to sit in the same spot they did a week ago: with one game separating them. The White Sox have dropped five in a row, but the Tigers have been unable to capitalize, and continue to sit one game back of the Pale Hose in the AL Central. The Angels are still 2-1/2 back, while the Rays picked up half-a-game. The only other difference is that the A's no longer hold the first wild card, as the Orioles have surpassed their record.

Baseball Prospectus' playoff odds have changed, even with the overall picture looking somewhat similar. The lack of time left to do something will have that effect:

The Rangers have the same odds, while the Yankees have moved up about five percent. The Orioles and A's have switched places a bit, but the Athletics are still the most likely of any to win the second wild card. The Tigers are five games away from being eliminated from wild card contention -- as you can see, almost their entire playoff odds are based on winning the division from the White Sox, who are a rounding error from 50-50 to make it to October. The Angels and Rays don't seem to have insurmountable deficits, especially if your memory isn't short, but the odds are against them at this point. That doesn't mean they can't make it, but it's going to be close. Case in point: the Rays have won five in a row, but they need everyone else to lose, too, or else they'll still finish short.

The Red Sox will get to have more say in how things finish up, for good or bad, as they face the Rays, Orioles, and Yankees in the season's last three series, starting with Tuesday's series opener against Tampa Bay.