The Red Sox won't be in the playoffs in 2012, but that doesn't mean the rest of baseball has nothing to offer. The American League is building towards a dramatic last three weeks, as eight teams are either in possession of a playoff spot as of this writing, or within at least 4-1/2 games of one. 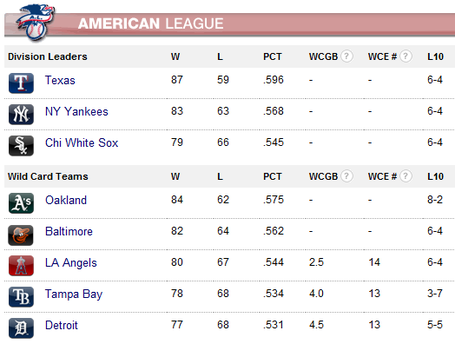 The Rangers, Yankees, and White Sox currently hold the division leads in their respective regions, while Oakland and Baltimore have a grip, albeit not a tight one, on the two wild cards. The Athletics took two of three from the Orioles this weekend, while the Yankees took two of three from the Rays after dropping the series opener on Friday. This created a little more space than there was in the AL East, but thanks to the Rays losing their series, it didn't damage the O's chances for a wild card spot very much.

Baseball Prospectus produces playoff odds daily, and while they are just that -- odds -- they do shed some light on how tough the upcoming schedule is, since it's a simulation of the rest of the season over and over again: 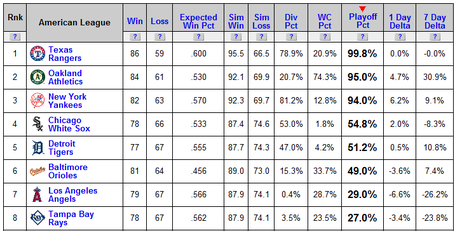 The A's have the second-best record, and are 4-1/2 games up on the Angels for a wild card spot, hence their being ahead of even the division-leading Yankees in these odds. At this stage, it seems there might be just the three clubs that could be labeled as sure things -- though, Red Sox fans know there's no such thing until the math makes it impossible -- while the rest of the playoff picture is very much up in the air.

The White Sox lead their division, but the Tigers are 4-1/2 games back of both the division and the second wild card. The two also play each other in a three-game series that starts today, so these odds could move significantly in one direction or another depending on if there's a sweep or not. The Orioles odds seem a bit low, considering their schedule over the rest of the year: Mariners, Blue Jays, Red Sox, and then the Rays. The Rays don't necessarily have it easy the rest of the way either, though, with the Red Sox twice, Jays, a four-game set against the White Sox, and then the season-ending series against the O's.

You can see how wildly these odds can fluctuate in just a week's time. We'll check in on the AL playoff race again next week, to see where things stand after a few more series potentially clarify things.