It will not get the press of a perfect game, a no-hitter, or even (for some reason) the bizarre achievement that is hitting for the cycle. But last night Clay Buchholz made history all the same.

It's a feat that has been accomplished just 47 times now in the major leagues by 44 different pitchers, including Buchholz. It's list graced by names that range from Nolan Ryan, Sandy Koufax, and Lefty Grove all the way down to Ross Ohlendorf and Sloppy Thurston. Of course, there's quite a few more good names than bad ones.

It's the second time Buchholz has made history against the Orioles, and while his immaculate inning may not be as widely recognized an accomplishment as his no-hitter, it is a far more rare occurrence. Those 47 immaculate innings are compared to 278 no-nos, making the no-no about six times more common. To put it in some sort of context, a perfect inning is closer in rarity to a perfect game than to the no-no.

The only other immaculate inning in Red Sox history (excluding minor leaguers--Daniel Bard, for instance, managed one in Pawtucket just before his initial promotion) belongs to Pedro Martinez, who opened a game against the Seattle Mariners on May 18, 2002 with three strikeouts on nine pitches in the first. The first man to go down? Ichiro Suzuki.

Buchholz started the inning out against the most impressive batter he would face in Adam Jones. Jones is, of course, no slouch at the plate, and given the sequence where a pitcher really has to throw in the zone, is a bit more difficult to strike out on three pitches than most. Jones, after all, is one of the more aggressive hitters in the game when it comes to swinging at strikes.

Good thing that's when Clay got his luck, at least per Brooks Baseball: 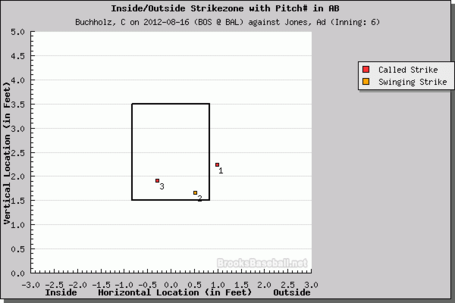 That first pitch was a curveball that seemed to break a bit outside of the zone. Buchholz' immaculate inning could have been over on the first pitch. But Laz Diaz was generous, and Buchholz got the strike call. Jones would offer at and miss the next curveball he saw, perhaps induced by the call, before taking a well-placed cutter down-and-away.

Matt Wieters is not typically so aggressive at the plate, and rarely swings through pitches, making him another hard K, but Buchholz got the job done all the same. The first pitch was a bit of a dangerous fastball up-and-away, but it only cost Buchholz a foul ball. The next two pitches were focused inside, with late break away from Wieters, who swung inside the first one, and took the second one as it broke hard into the zone.

By the time Chris Davis stepped to the plate, it may as well have been over already. Now facing a free-swinging, low-contact, high-strikeout DH, Buchholz was not after the history, throwing to the corners and putting himself at risk of a ball. Davis, however, obliged, going after each and every offering, fouling off two before swinging over a splitter--the one pitch clearly out of the zone--for strike three.