Share All sharing options for: An Adrian Gonzalez Resurgence?

Adrian Gonzalez has been one of the biggest disappointments for the struggling Red Sox this season. After receiving MVP votes in each of the past four seasons and posting an average weighted Runs Created Plus (wRC+) of 146 during that time, Gonzalez has been a league average hitter this year. His power has vanished (.432 Slugging and .141 Isolated Power) and his walk rate (5.5%) is almost half what it has been throughout his career. With six more years left on his contract, Red Sox fans and the front office have reasons to be extremely concerned.

So Gonzalez’s recent hot streak is understandably exciting. In July Gonzo, is hitting.360/.368/.520and his power has returned in the last two weeks as well. Since July 13, he has three home runs in 44 plate appearances and an of .209. During that time he has hardly struck out at all. His strike out rate for July is just 7.9%, down from his career rate of 17.8% rate. He is swinging the bat well these days, but is this just a hot streak or has Adrian Gonzalez recaptured the form that led the Red Sox to sign him to a seven year, $154M deal? Unfortunately is seems to be the former.

The issue for Gonzalez this year has not been contact. He has a .291 batting average and is strikeout rate for the full season is in line with his last few years at 16.4%. That batting average may be fooling some of the more traditional-stat oriented fans and pundits but it can make up for the dramatic loss of power and patience. While the home runs could lead us to believe his power is back, his patience is even more lacking then ever.

He not drawn a single walk in the month of July and on the season he has posted a career high out-of-zone swing rate (35.5%) and overall swing rate (52%). He is making more contact than ever before as well, which means he is seeing fewer deep counts. His pitches-per-plate-appearance rate is down from 3.83 last year to 3.71 this year. Even though he is still doing much better than average when he puts the ball in play (.328 batting average on balls in play) he is down 20-25 times on base thanks to those extra swings and that translates to nearly 0.50 points lost in his on-base percentage.

Even with the lack walks, Gonzalez’s ability to drive the ball gives him an above average OBP. He will be more likely to see some wild swings in his statistics through random variation, but he can still be a productive hitter without walking if he hits for power. However, this recent show of power may not be much more than a fluke. Gonzalez’ 2012 home runs have been traveling a shorter distance on average than at any time in the past four years. 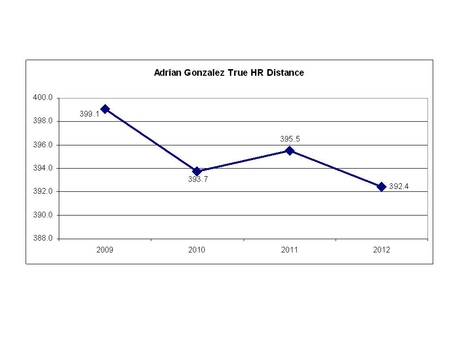 In 2010, Gonzalez was fighting with shoulder issues all season and his home run total dropped from 40 in 2009 to 31 in 2010. He had surgery following the season and posted his highest batting average and on base percentage ever in 2011, but he still saw his HR total drop to 27 in more plate appearances. This season his home runs rate is even lower and his double totals are down as well. While he has hit three home runs in the past two weeks, he does not have any other extra base hits in that time period.

Using the fantastic new Pith F/X Tool over at Baseball Prospectus (created in connection with Brooks Baseball) helps illustrate what is going on. His swing rate is not only up, but it is up in a place that doesn’t really work for him He is swinging more at pitches up, both in and out of the zone, compared to last season. As most fans can tell you, he is excellent at hitting the outside pitch, but surprisingly he is swinging at more pitches inside, especially low and inside, off the plate.

These major issues for Gonzalez have not gone away despite his recent hot streak. He is still an excellent hitter when it comes to making contact, but his lack of patience and power this season are drastic enough to drag him down to being a below average hitter for his position. He is still excellent defensively, but his lack of offense is a real concern. It is very possible that his shoulder injury has resurfaced and the drop in his average home run distance supports that theory, but his deteriorating approach is just as worrisome. His walks have not only declined sharply this year but they have gone down every month of the 2012 season. Until he returns to something closer to his 2009-2011 plate approach, he is going to struggle to be a productive hitter.