Jon Lester’s struggles are a hot topic at the moment and it isn’t hard to understand why. The one-time ace of the Boston Red Sox staff is coming off the worst start of his career (by GameScore) and he currently has the highest ERA single season ERA of his career by almost a full run. His fielding independent pitching metrics (FIP and xFIP) are better, but both are still well above his career norm. July has been particularly cruel to the Sox lefty; his ERA for the month is a ridiculous 10.42 and his command, which had been better than ever earlier in the year has vanished completely, leading to 5.21 BB/9 on the month.

With the Red Sox bobbing up and down around the .500 mark, many are now calling for Lester to be traded. With his value at an all-time low, this is more an expression of frustration than a reasonable plan and it is hard to imagine it actually happening. Lester is owed $11.65M in 2013 with a $13M option for 2014, which is around half of his value during his bet years and even now, as he struggles, it is still a fairly reasonable contract. The Red Sox are unlikely to receive anything even close to fair value for him at this moment and even if they could, fixing Jon Lester would help them far more.

So what is the problem with Jon Lester?

It probably is not injury. Lester’s fastball is down about 0.5 mph from his career average and over one mph from his average at its peak between 2009 and 2010, but he has not lost anything velocity-wise on his other pitches and he has still shown some ability to dial his fastball up towards 95+ mph. If Lester was truly suffering from an arm issue, we could expect to see a more dramatic drop off across all of his pitches and a near total lack of that peak fastball ability. Earlier, Marc suggested this is a mechanical issue and that seems like a more logical explanation. Whatever this mechanical issue may be, it is having a major impact on the most important pitch in Lester’s arsenal, his cutter.

During his 2009-2010 peak, Lester threw is cutter often (18.3%*) and effectively (15.3% whiff rate). This season Pitch F/X has him throwing the pitch just 11% of the time and getting significantly fewer whiffs (11.7%). There is always the possibility of a classification error when dealing with Pitch F/X and I think that is partly responsible for the low rate of cutters, but that error only further illustrates just how much Lester is struggling with what was once his most important secondary pitch. 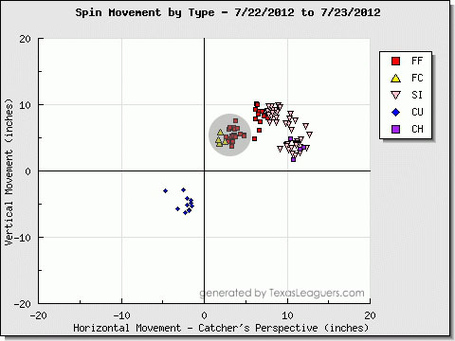 I have circled the cutters as well as a number of fastballs that are more closely grouped with his cutters than with the other four seam fastballs. This is where I believe a classification error is taking place. The result of this is that we do not have an accurate count on the number of cutters he is really throwing (or intending to throw). It is certainly greater than the 11% that Pitch F/X estimates, however. This error means that Lester is throwing more cutters than the numbers reflect, but the reason that his error is happening is a greater reflection of the problem than just a drop in usage would be.

From 2009-2010, Lester’s cutter average 4.8 inches of vertical movement and -0.92 inches of horizontal movement, giving it a substantially different path than his four seamer which stayed much further to his arm-side (5.53’ horizontal, 9.04 vertical)* Last season, his cutter moved slightly less horizontally at 0.52 inches. Now it is moving in on righties even less with .089 inches of horizontal movement. There is always some over lap between the cutter classification and the four seam classification in the 2-3 inch area, and now Lester’s cutter is more easily confused with his four seamer.

* as a left hander, when Lester throws a pitch that breaks in on a right-handed hitter (like his cutter), the break is greater the lower the number.

The result is that both pitches are less effective. Pitch type values are not the most reliable statistic, but they do shed some light on the issue. Lester’s fastball has been worth .09 runs saved per 100 pitches over his career, but this year it is costing him .31 ever 100 pitches. The ineffectiveness is even more dramatic for his cutter, which has typically saved .88 runs per 100, but now costs him an incredible -1.86. Combined the two pitches are more than three runs per 100 pitches worse this year than they have been previously. With less movement, Lester’s cutter, which averages 89.9 mph becomes something of a hanging fastball, especially for right-handed hitters, who are lighting up Lester with a .367 wOBA against.

The cutter is not the only pitch that is troubling Jon Lester right now, but it may be the most problematic one for him. If he cannot recover the lost movement, the pitch is almost certainly not going to be effective enough for him to throw it even 15% of the time. That doesn't mean he is done as valuable pitcher without it, though. In his two best starts (again, by Game Score) he showed two possible paths for the future.

The first, his April 28, seven inning, seven strike out, shutout performance was vintage Jon Lester. His cutter had similar movement to the 2011 version and while it was not generating tons of whiffs, he located it extremely well and got a large number of foul balls with it. In this start, Lester had the combination of strikeout ability and ground balls that made him an elite pitcher over the three previous seasons. He has rarely been able to replicate this, but if his cutter returns to this form, he can be a front line starter once again, as this start shows.

Three starts later, Lester was pitching very differently when he went the distance against the Seattle Mariners.

He struck out six in nine innings that game and walked none, but there is a noticeable difference in the cutters and he seemed to be aware of it. He threw just two pitches that were classified as cutters and three other pitches that were similar but got classified as four seam fastballs. His sinker was the key pitch that day and his liberal use of the pitch helped him to go all nine innings, but he was far less effective in striking out hitters.

Right now, fans and pundits are ready to give up on Lester. It is easy to understand, but it is almost certainly short-sighted. If he can rediscover the cut fastball that he has had over the past few years, he can dominate hitters once again. Even if that does not happen, however, he has shown he can be a solid mid-rotation starter by moving away from that troubled pitch and focusing on his sinker. Either way, he is too valuable to give up on while he is at his worst.