Share All sharing options for: One Plate Appearance: Kevin Youkilis vs. Jon Lester

A few months back I decided it would be fun to isolate one plate appearance and really analyze it. I called the resulting feature One Plate Appearance because I'm very creative. The first article was about an at-bat by David Ortiz (you can read it here) against Seattle. Today, for the second in what I hope will be an on-going series, I'm going to look at Kevin Youkilis's fourth inning plate appearance last night against Jon Lester.

It was the top of the fourth inning last night at Fenway Park and Red Sox pitcher Jon Lester had struggled through the first three and two thirds innings. This inning specifically had also been a struggle, as Dayan Viciedo had led off with a crushed ground-rule double over the side of the Red Sox bullpen in right center. Lester then induced a hard grounder at Adrian Gonzalez at first base for the first out before walking Gordon Beckham and getting Alejandro De Aza to ground out softly, again to Gonzalez. So, runners on first and second with two down. The score was 3-2. A close game, and with Phil Humber on the mound for Chicago, still a very winnable one for the Red Sox.

To that point Lester had thrown the following pitches:

Lester actually throws a few different fastballs, including one classified as a sinker which has more horizontal movement than his four seam fastball according to Texas Leaguers' pitch f/x system. However, I've never read or heard anyone say Lester throws a sinker, and to be honest, I'm not really sure he does. It might be a pitch classification issue as Texas Leaguers has it listed, but Fan Graphs doesn't. I'm going to go with Fan Graphs on this one, though I'll note the discrepancy going forward.

To this point in the game Lester had throw 78 pitches and recorded 11 outs. He had faced Youk twice, walking him in the first inning on five pitches and inducing a ground out to shortstop (on the first pitch, oddly enough) to end the second inning. The only pitch types Youk had seen among those six pitches were fastballs and a change-up.

Pitch One: Fastball (sinker?) 93 mph, low and away; Called ball 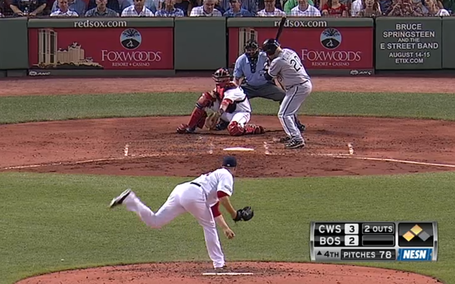 With first base open and the left-handed Adam Dunn on deck it's an open question whether or not Lester is going to give Youkilis anything to hit. Salty sets up on the outside corner at the knees, but still within the strike zone. Lester misses the spot a bit away and too low. You can see Salty reach for the pitch just above the dirt. Ball one.

Pitch Two: Change Up, 86 mph, at the thigh and just outside. Ball two 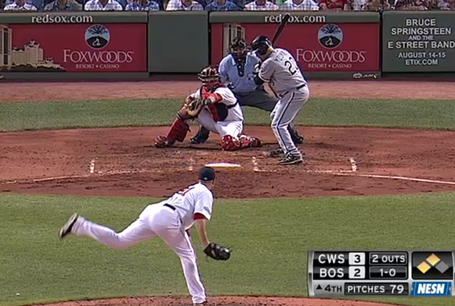 Salty caught the ball again just off the plate. This time he set up right in the middle of the plate, apparently hoping the change up's slower speed would be enough to fool Youk into taking the pitch or to swinging early. Neither happened primarily because, again, Lester missed his spot. Now, sometimes catchers set up over the middle of the plate even when the pitch is supposed to be delivered elsewhere with a man on second base, but because NESN didn't show Salty giving the sign, I can't be sure. The fact that the pitch is a change up though is a clue that it was likely supposed to be close around the plate, probably close to where Salty set up his mitt. It was, generally speaking, but wasn't a strike, and Kevin Youkilis being Kevin Youkilis, he wasn't about to offer at a pitch like that with no strikes on him. 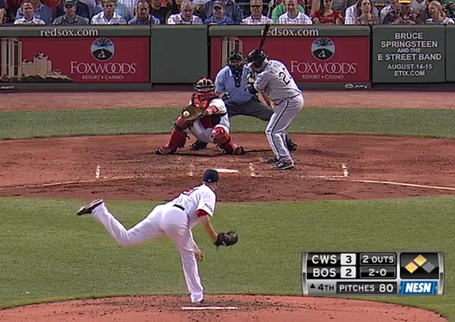 This is a clear attempt to get back in the count. Salty set up outside at the knees but for the third straight pitch Lester misses his spot. In the above picture you can see the pitch just before Salty catches it outside. Salty tries to bring the ball back but nobody is fooled.

By this point Lester has missed on three straight pitches, two of them fastballs which he should be able to control to some extent. He's put himself in a big hole against a good hitter and as some including Jerry Remy might suggest, with this kind of hole against Youk and a left-handed Dunn on deck, maybe it's time to throw ball four and live to fight another day. Actually, what Remy said is, "might as well go ahead and put him on because that's what it looks like Lester is trying to do." I think we can deduce from the missed location on the first three pitches that that wasn't Lester's intent. Still, that doesn't make it an imprudent course of action. 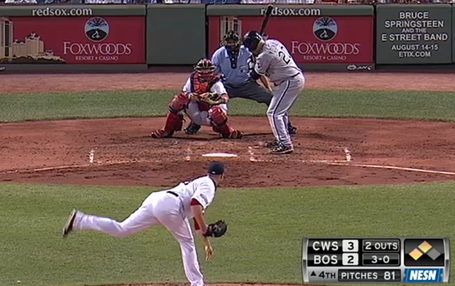 Lester doesn't give in. He tries the four seam fastball, a pitch that he should have better control with, and this time finds the strike zone. He misses Salty's glove again, the mitt was once again low and on the outside corner, but with a 3-0 count Youkilis was taking all the way. Lucky too, because this one was out and over the plate, close to where a guy like Youk could crush it.

So now we're at 3-1. Lester has thrown Youk four pitches, three of them fastballs, and stayed away on every single offering, whether by intent or not. Traditionally Youk would be looking for a fastball he can drive in this count, out and over the plate, not too dissimilar to the pitch he just took on 3-0. 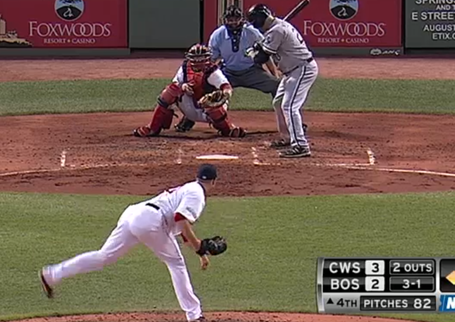 This is the first time Lester has thrown a pitch where he was supposed to in this entire at-bat. It's also worth noting again that with a runner on second, Salty's set-up may be a mis-direction should the runner on second attempt to signal the location of the pitch to Youkilis. I'd argue that, as a very new member of the team, the White Sox likely aren't attempting that, but it's a real concern in any case. Still, it's a good pitch by Lester, and one that it appeared Youkilis wasn't expecting. He might have been expecting ball four, or maybe taking until two strikes considering Lester's struggles to that point. Or maybe it simply wasn't a pitch Youk thought he could do anything with upon watching it leave Lester's hand. In any case, full count. Lester had battled back and now had a real good shot to get the out, strand the runners, and get out of the inning without further damage.

To this point, Lester has thrown Youk five pitches, four of which have been fastballs. He hasn't thrown a cutter or a curveball. It's easy to second-guess now, but maybe something different, something Youkilis hadn't yet seen in that at-bat wouldn't have been a bad idea. Of course, pitch selection isn't the only problem as we'll soon see.

With all the caveats about the runner on second, here is where Saltalamacchia set his glove as Lester was about to release the pitch: 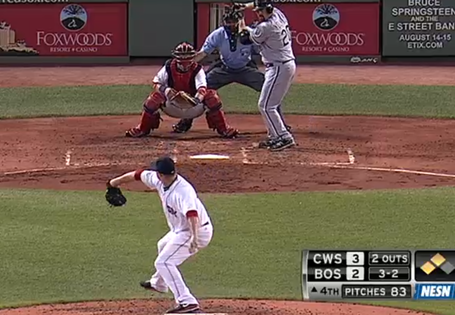 See where Salty's glove is? Again, low and away, like every other pitch in this at-bat. It's possible that this is, again, some sort of mis-direction, but I doubt it. This is where the pitch is intended to go. If Lester can hit his the corner then he gets the out (probably), if not, Youk walks and he gets to face the left-handed Dunn still with two outs.

Instead, he missed his spot. Badly. Very, very badly. Here's where the pitch ended up: 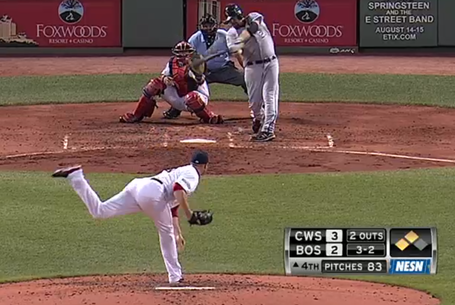 Look at the difference between the last two pictures with respect to the location of Salty's mitt. As Lester is in his motion, Salty is looking for a pitch low and away, hopefully on the black and at the knees. Instead, he gets waist high and over the center of the plate. This is a pitch that any respectable power hitter looking for a fastball will crush. And Youkilis, to his credit, doesn't miss it.

Here's a close up of the moment of contact: 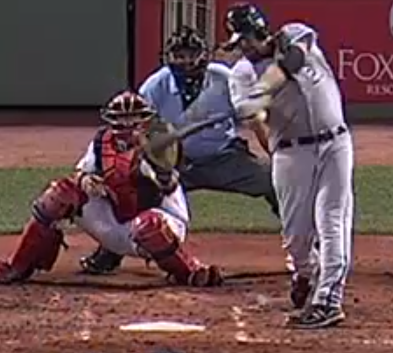 You can see the ball, a white blur, just below and to the right of the umpire's face mask. You can also see the location of Salty's mitt. See the point of the plate? See Youkilis's belt? The pitch, had it been allowed to travel that far, was at the confluence of those two points.

In the end, Youk crushed it and, in doing so, turned a close, winnable, 3-2 game into a lost cause.

Looking back at the encounter, there seem to be numerous ways that Lester could have made it more difficult for Youkilis. Changing speeds might not have been a terrible idea, for instance. Here are the pitch speeds that Youk saw in that at-bat (via the excellent Brooks Baseball): 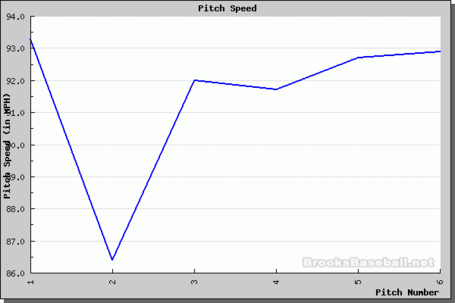 That graph is a bit deceiving as it goes from 94 mph on the top to just 86 on the bottom. The drop between the first and second pitch is just six mph. A good change up will be around 10 mph different than the pitcher's fastball. Otherwise you end up with not enough speed change to confuse the hitter and thus the pitcher is just throwing a weak fastball.

Note the last four pitches Lester threw. The were, in order, 92, 92, 92.5, and 93. You're not throwing anyone's timing off with that. It can work if the pitcher is hitting his spots and/or if the ball is moving enough, but as I think I've demonstrated, Lester wasn't doing hitting his spots, at least not in this at-bat, and as the White Sox demonstrated, the pitches weren't moving enough to throw them off.

Finally, here is the location of the pitch Youkilis hit out according to pitch f/x: 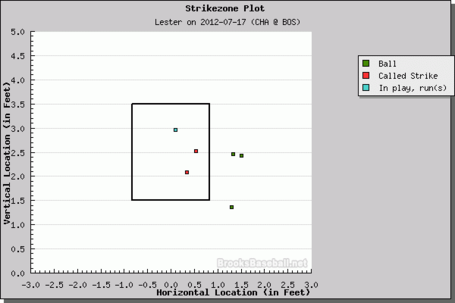 The pitch that ended up in the Monster seats is bright blue and pretty much exactly where you'd want it if you were participating in the home run derby.

Lester's strategy in this at-bat appears to have been to stay away from Youkilis and hope he could get the calls on the corners, or induce Youkilis to get himself out by swinging at pitches he couldn't drive. Lester missed with the first three, and found the zone with the next two. With the sixth and final pitch, he got far more of the plate than he intended to and paid the price for it.

That last pitch was really the crux of the whole at-bat. If Lester hits his spot there, or maybe tries a curveball, it's likely that either the Sox would have got out of the jam or that Dunn would have come up with the bases loaded and a two down. Not an ideal scenario but far better than what actually happened.

Lester still has terrific stuff, but if he can't locate it, as he failed to do against Youkilis, and he fails to change speeds to keep the hitter off balance, well, that's when something bad is likely to happen. Unfortunately for the Red Sox, that's exactly what happened last night in the fourth inning against Kevin Youkilis.