The Red Sox And Two-Strike Counts

Share All sharing options for: The Red Sox And Two-Strike Counts

In 2011, the Red Sox had league-average pitching as a result of two productive starters counterbalanced by a slew of horrific pitching performances. Josh Beckett and Jon Lester (and less than half-a-season of Clay Buchholz) held strong against the combined awfulness of Andrew Miller, John Lackey, Tim Wakefield, Kyle Weiland, and a few months of Daisuke Matsuzaka. The bullpen was in much the same state, with Daniel Bard, Jonathan Papelbon, and Alfredo Aceves staying strong throughout most of the season, while many others bounced between effective and embarrassing.

For 2012, there are better pitchers. The rotation is, in theory, better, especially with Bard and Felix Doubront pitching well to start the year. The bullpen should at some point match up with last year's, but with Mark Melancon in the minors, Andrew Bailey hurt, and no one quite sure what kind of outing is coming from Franklin Morales, Vicente Padilla, and others, there are a lot of questions right now.

The reason we say "in theory" is because the Red Sox have had a serious issue putting hitters away in the season's early going. The rotation has been just league-average in terms of striking hitters out with seven per nine, and that's strange given the staff has Lester (career 8.3 per nine) and Beckett (5.0), but those two are missing bats like Buchholz. (Who, by the way, is at just 4.8 per nine, below his career 6.8 rate.) All of the strikeouts have come from Doubront (11.3 per nine, thanks to 20 in 16 innings) and Bard (9.5 per nine, right around his career 9.7 per nine). Those two, unsurprisingly, lead the starters in ERA+ as well.

This inability to strike opponents out -- in turn allowing the ball to go into play -- has led to struggles with two strikes in the count. With an 0-2 count, something Red Sox pitchers have created 59 times this year, opponents are hitting .271/.271/.525 with three homers. That's nearly 250 percent worse than what the average pitching staff has allowed. Overall, with two strikes, Boston is allowing opponents to hit .247/.314/.434 (196 split-adjusted OPS+).

Red Sox pitchers have struggled with throwing those 0-2 pitches where they want them, serving up hittable offerings to batters they should be controlling the plate appearance of. The problem has cropped up again during 2-2 counts, as well as just when the pitcher is ahead in general (150 sOPS+ when ahead).

This wasn't an issue in 2011, so it's tough to just point to Jarrod Saltalamacchia (or the absence of Jason Varitek) and tell him to call better pitches -- he caught the majority of starts last year, and the Red Sox were right around the league-average with two strikes despite all of the terrible pitching. If you look at Salty's glove, too -- where he is setting up a target for his pitchers -- you can see the pitchers missing, as Lester did against the Twins multiple times with two strikes in Monday night's game (most notably in the fourth, when the Twins exploded for four quick runs), or Melancon did against the Rangers last week. Pitch calling might be a factor, but a lot of this is on the pitchers. Look at where Salty setup last night on Joe Mauer with a 1-2 count, low and inside... 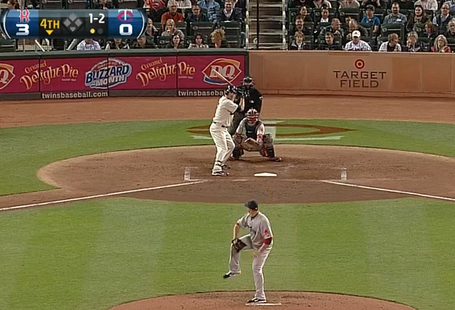 ...and see where Lester's pitch ended up. Middle of the plate, enough so that Mauer was able to go the other way. (Images courtesy mlb.tv) 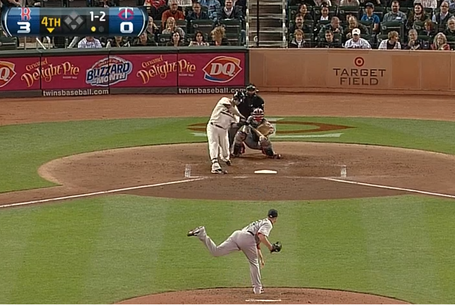 Pitchers miss with pitches, that's certainly allowed and normal, but it has happened to Boston again and again in the season's first 15 games. They haven't been lucky enough to have it be singles all the time, though. The Red Sox have given up 13 homers in two-strike counts, and there's plenty of blame to go around:

Every starter -- even the ones missing bats -- have had trouble putting hitters away with two strikes. Clay Buchholz has it the worst, after his start against the Yankees in which he couldn't seem to do much besides serve up homers. As far as last year's sOPS+ for the three returning starters go, Buchholz and Lester both sat at 94, while Beckett finished much better than the average at 78.

There's more difference in the reliever corps, but the overall message is still the same:

Alfredo Aceves hasn't been perfect to start the year, but he's mostly hit his spots with two strikes on his opponents. Other than he and Scott Atchison, it's been horrific, as none of these pitchers have been able to put hitters away consistently. As a unit, the bullpen is striking out 7.1 per nine, a full punch out below the average for a bullpen, and in the same disappointing territory as the rotation.

The pitching should be better than this -- especially in the rotation, where it usually is -- but if you're looking for why it hasn't been, look no further than their performance once they get two strikes on the hitter. Whether it's command, pitch selection, an unbelievable coincidence where the entire pitching staff has decided to slump in sync, or all of the above, the Red Sox are going to need to adjust and regress back towards where arms like this should be. The next 21 games, all against mediocre or worse opponents, presents not only an opportunity to do so, but a slate of games where doing so is necessary if they want to make up for early-season mistakes.