Jason Varitek has long been lauded for his ability to handle a pitching staff and call a game. This praise has all been anecdotal, as catcher defense as most of us know it is still very simple when represented statistically. Varitek doesn't get any credit for his perceived ability to call a game when defensive statistics focus on his ability to throw out runners and catch pop ups behind the plate.

Since he has struggled over the years throwing out runners, and has been nowhere near as effective at the plate in his later years, the whole pitching staff handling theme seemed more like a defensive reaction from his proponents to prop up Varitek's value and purpose, rather than a legitimate point in his favor. When you can't measure something, you often take it for granted as being unimportant. But that's not the case: it often just means we haven't figured out what it's worth yet.

Much research has been done to clear the fog surrounding catcher defense, but before we delve into that, let's look at how Varitek rates by today's more traditional methods. According to defensive wins above replacement at Baseball-Reference, Varitek accumulated -0.6 defensive wins over his career. This is no surprise, given he threw out just 23 percent of runners over his 15 seasons in the majors. Fielding Runs Above Average (FRAA) has Varitek at -10.9 runs (or -1.1 wins) in his career. Fangraphs has him looking even worse, at -29 runs (-2.9 wins).

This has adversely effected his overall career value. Not because any of these three figures take away a serious chunk of his career's wins, but because they don't accurately reflect the role and value that a catcher has on winning. The absence of value in today's defensive metrics hurts the evaluation of Varitek's career.

This is a catcher who, over the course of his career, caught a record four no-hitters. He also has five one-hitters to his credit, with a few of those coming in his later years. All his teammates -- especially pitchers -- have done is heap praise on to him since his retirement was announced, and that's just a continuation of the compliments he received during his career. How much of this is coincidence -- Varitek did have some pretty good pitchers throwing to him in his day -- and how much of it is actually Varitek?

According to advanced research in catcher defense, a whole lot of it is Varitek. Analysts like Keith Woolner, Sean Smith, Dan Turkenkopf, Mike Fast, Bojan Koprivica, and Max Marchi have been digging deeper into what defines a catcher's defensive value over the years. Headway has been made in the areas that things like UZR and FRAA just don't capture, such as blocking pitches and framing pitches -- the things catchers do far more often than attempt to catch a runner or go after a pop up.

It is in these measures that Jason Varitek shines behind the plate. Mike Fast showed us late last year that Varitek doesn't frame pitches very well thanks to a stabbing motion he uses to snare balls on the edges. His tendency to do so results in few borderline pitches being called as strikes in the pitcher's favor: 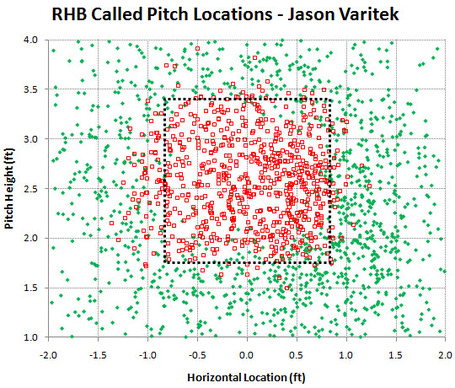 This is about the only area in which he struggles in the advanced figures, though. Koprivica's work shows Varitek to be one of the better catchers at blocking pitches in the majors -- his 2008 through 2011 seasons rank #12 among all catchers with 5,000 chances. Marchi's work on blocking puts Varitek eighth over the same stretch.

This helps counter the results of FRAA, UZR, and dWAR to a degree, but the real kicker is in game calling. As Dan Turkenkopf puts it:

We've made great strides with the last few years of PitchFX data and now have a basic understanding of the effects of pitch blocking and framing. Measuring game calling is probably the last big unknown, at least when it comes to the game on the field. To me, game calling will be the biggest single aspect of catcher defense, and also the hardest to isolate. Without it, we're probably 50-60% of the way to understanding.

Based on this statement, we're only about halfway to understanding Varitek's value as a backstop. But the analysis community is close to understanding game calling, as Marchi's article from last week on this very subject details. It is a must-read -- as are all of the other linked pieces concerning catcher defense -- and it also puts a number on what pitchers have said for a long time: that Jason Varitek knows how to call a game.

Since 2008, Varitek ranks fifth among catchers in runs prevented due to game calling and framing. Turkenkopf wasn't kidding when he said that game calling is the "biggest single aspect" of catcher defense, as Varitek has prevented 57 runs more than expected in that four-year stretch.

That's a long way off from the defensive numbers cited back at the beginning of this piece. The gap is expressed in wins, even on a season-to-season basis, never mind cumulatively over four years. We can build a rough sketch of catcher defense using the numbers Marchi has produced for blocking pitches, game calling, and pitch framing and combining them with the figures of your standard defensive metrics that measure the ability to throw out runners and field the catcher position in the most basic ways:

It's a rough sketch, but whereas Varitek was considered worth -3 runs by FRAA from 2008-2011, when combined with Marchi's figures, he's worth nearly six wins in the same stretch. That would put Varitek's overall value at over eight WARP, rather than the 2.6 he posted over the last four years. He would be around six wins via Baseball-Reference, and nearly seven wins according to Fangraphs. That's a significant difference, and shows that Varitek was still productive, even at the end of his career.

These numbers aren't gospel, by any means. They will be refined by the community, possibly inflated or deflated once a proper scaling has been agreed upon. But the important thing to take away from this is that the current form of catcher defense is severely lacking, and judging someone like Varitek -- who clearly had his value in aspects of the game that weren't yet measurable -- by them is doing a disservice to both Varitek and your own knowledge of how the game works.

We're in an exciting time where new data unveils new knowledge of the game, or helps shed light on old adages we couldn't put a number to. It's a shame Jason Varitek only got to play during the tail end of that, but maybe it won't be too long before we can properly value him for what he was.

Thanks to Dan Turkenkopf for his assistance.