Ross Ohlendorf signed with the Red Sox instead of accepting other offers, and, according to Alex Speier, it's because Ohlendorf wanted to pitch for a team that will compete. Given he has been in Pittsburgh since 2008, it's hard to argue with that. Ohlendorf isn't guaranteed to be a part of the major league roster, but Boston has him signed to a minor league deal, and he has an option remaining. He also has just over three years of service time, so the Red Sox have him under team control through 2015 if they so choose.

Speier notes the similarities between Ohlendorf's situation and that of Alfredo Aceves last winter:

In that sense, his addition by the Sox on the cusp of spring training harbors some similarities to the signing last February of right-hander Alfredo Aceves. Both are former Yankees with options left; both were coming off of disappointing seasons that were derailed by injuries; both offered flexibility as starters or relievers, with the roster flexibility of a minor league option and the longer-term flexibility of remaining under team control for a significant stretch.

The same idea came to mind in early December, when I wrote about how Ohlendorf, by virtue of being hurt in the past, was likely to slip through the cracks and sign a minor league deal, a la Aceves:

This injury might keep someone from giving him a legitimate shot at a rotation spot, in the same way Alfredo Aceves was scooped up late into last off-season's game due to a history of back trouble. That worked out well for Boston, as they were rewarded for their risk-taking with 90-plus innings and a player still under team control ... He won't be Aceves, by any means, but he is someone who could do a better job in spot starts than anyone else the Red Sox currently have at Triple-A.

While the Red Sox have boosted their depth considerably since that writing, it's likely Aaron Cook and Vicente Padilla will both have jobs in the majors, and Carlos Silva can opt-out as soon as mid-April should he not be in the bigs. John Maine is likely to relieve, Andrew Miller is not one to be relied upon -- even if his talent merits additional chances -- and Alex Wilson is no guarantee to be ready to step in should the need arise. Ohlendorf gives them another pitcher who has succeeded against major league hitting in the past. While they might not want him in the rotation every day, he's a worthwhile depth acquisition, and someone who is certainly capable of spot starts or short rotation stints if necessary.

His flyball rates are a bit worrisome, but he induces lots of weaker flyballs of the infield variety as well. The homers are a real thing for Ohlendorf when the ball does leave the infield, but 2011 makes that seem more problematic than it is, too, since he just never got right from a health perspective. He's no worse than Wakefield usually was in terms of homers per nine, a fact that's either calming or alarming depending on how your memories shape themselves.

Switching from the porous defense of Pittsburgh to Boston's highly-capable squad should help him out, though, as should being another year removed from the initial shoulder problem. If not, then, like with John Maine, this is why minor league deals exist: to take risks that won't cost you.

If you want to read about Ross Ohlendorf The Person, a Princeton graduate, in more detail, check out Tim Kurkjian's wonderful feature on the pitcher and his senior thesis from 2009. His thesis focused on the June amateur draft, and the return on investment from bonuses paid out to picks. I'll see about hiring him to analyze here if the pitching thing doesn't work out.

Gordon Edes and the rest of the Boston beat down in spring training all noticed something today: Bobby Jenks looks slimmed down. This isn't some "best shape of his life" spring training tripe, either. Seriously, look at Jenks, in a picture from a January story on him in the Boston Globe: 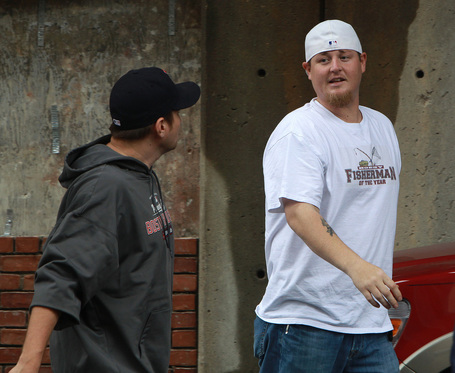 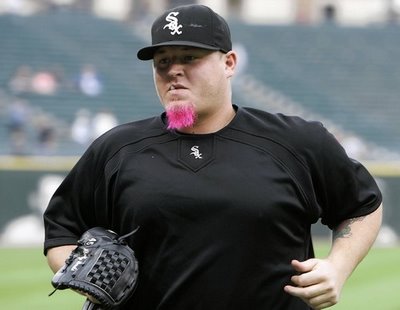 That could be a good sign for both Jenks and the Red Sox in 2012, once his back is healed enough for him to get to business.

Compensation is apparently almost decided. Hey, get back here. They mean it this time. No, look:

Selig spends a "ton" of time on everything, as fans in Oakland waiting to know if San Jose is viable will attest, as will every single baseball fan still wondering if we'll have a second Wild Card in each league this year. But this, at the least, gives us new reason to have hope that this will all be mercifully over soon.