The New England Sports Network has made some recent additions to their staff, hiring ESPN's Jenny Dell as well as former major leaguer (and former Red Sox) Matt Stairs to join the team. Dell was brought on board to replace the departed Heidi Watney, while Stairs is expected to join Jim Rice, Dennis Eckersley, Tom Caron, and Peter Gammons in the studio for "20-30 games".

Stairs was signed by the Montreal Expos as an amateur free agent back in 1989. He was a shortstop when he first started to play professionally, as difficult as that might be to imagine now that he's 43 and, well, Matt Stairs. He bounced between the majors and the minors for a few years starting in 1992, and ended up playing for the Chunichi Dragons in 1993, until the Expos re-signed him as a free agent at the end of the year. When Dan Duquette left the Expos for the Red Sox, Matt Stairs ended up coming with him, as his old boss purchased him in February of 1994.

Stairs spent 1994 in the Eastern League playing for Double-A New Britain. He hit .309/.407/.486 at age-26 there, then split the 1995 campaign between Triple-A Pawtucket and Boston. That would be the end of his time in this city, though, as he was granted his free agency and went off to Oakland following that campaign.

Stairs played for another 10 organizations over the next 11 seasons (well, nine if you don't count the Nationals as being distinct from the Expos). He was part of the World Series winning 2008 Philadelphia Phillies, as that club traded for him on August 30. Stairs did what he does best in the NLCS that year, pinch-hitting for Ryan Madson in the eighth inning of Game Four, and sent a Jonathan Broxton pitch over the fence for a two-run homer that ended up being the difference.

Stairs is the all-time leader for pinch-hit homers, and was well-known enough for his tendency to go deep while pinch-hitting that t-shirts exist that proudly exclaim it: 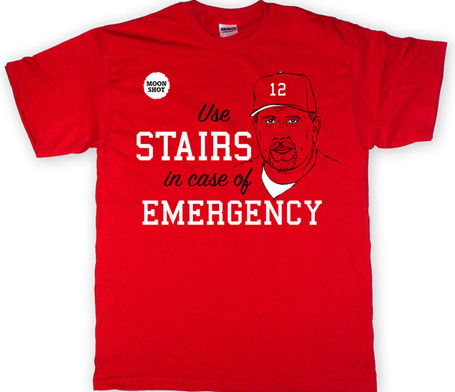 Pinch-hit homers weren't his only specialty, of course. Stairs is one of just three Canadian-born players with 200 career homers, joining Larry Walker and Jason Bay on that list. Basically, even Joey Votto needs another 81 bombs before he gets to be in Matt Stairs' exclusive club, and Justin Morneau remains 15 shy. Adam Loewen is trying to be as cool as Stairs far too literally, as he is now 27 years old with just one career homer, and already in his second organization.

I have no idea how good Matt Stairs will be as an analyst. I do know he's fun to listen to, and he's certainly been around the game long enough to know what's up. As someone who has always liked watching Stairs play, though, I hope his NESN debut goes well, so we get to hear more of him in the future. Baseball without Stairs in some capacity just feels weird.