Now a Red Sox, it's time to see what we should expect out of Mike Napoli in Fenway

Share All sharing options for: Mike Napoli And Fenway Park

The Red Sox have their new first baseman for the next three years thanks to the signing of Mike Napoli. While Napoli has been an impressive hitter for quite some time now, especially for a catcher, there are reasons to believe that Fenway will be the stadium most-friendly to him, and that's great news for Boston. Especially since they plan to use him at first base, where offensive requirements are much loftier.

While Napoli spent 2011 and 2012 in hitter-friendly Texas, the entire rest of his seven-year career came in the decidedly less hitter-oriented Angels Stadium of Anaheim. That's a pitcher's park, one that destroys right-handed power. Napoli's power is prodigious enough, though, that he owns a career .517 slugging and .257 Isolated Power there. For the same of comparison, that's about equal to what he's produced in Arlington in his career: a .532 slugging, and .266 ISO. You don't get extra credit for the ball going yard by more, it just has to clear the wall, and Napoli has the bat for that.

Moving full-time to Texas actually didn't help Napoli's numbers in the way you think it would, maybe in part because of this. His road numbers were better than his home ones in both seasons with the Rangers, despite the fact that Texas owned the much better ballpark for hitters. That's not the same thing as saying he didn't do well there -- he was better in Texas as a Ranger than he was as an Angel -- but it wasn't leading his offensive attack, either. It's part small sample, but also part logic: Napoli is an extreme fly ball hitter, and that means a lot of deep fly outs in a park as expansive as Texas'. It's not as cramped in Arlington as numbers might suggest it is, but instead, it's the higher average temperatures and the dry air that make the ball fly out of the park. Essentially, Fenway and Rangers Ballpark go about reaching the same place in very different ways.

According to Hit Tracker Online, most of the homers Napoli belted at home would have gone out in most of the other parks. Few of his homers were aided by the environment, as when Napoli gets a hold of one, it tends to go far. Take a look at where his homers landed in 2012, with Rangers Ballpark in Arlington as a backdrop: 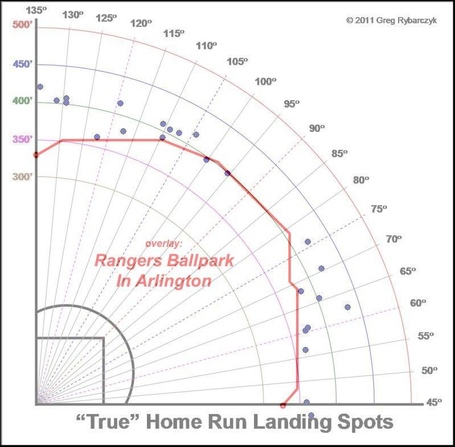 Texas helps with home run power, but doubles and triples get roughly the same jump, for both lefties and righties.. Fenway is suited to hitters in the same way, in that it boosts batting average on balls in play, but it does it much differently, in a way that should help Napoli more than Arlington ever did. Thanks to the short wall in left, many of Napoli's high-and-deep fly balls that turned into fly outs could become long singles, doubles, and homers. While Texas did that, too, it didn't do it by nearly as much -- doubles and triples were boosted in Arlington by 12 percent for right-handed batters according to Stat Corner, whereas Fenway increased them by more than twice that. The difference shows up in the respective parks' BABIP over the last few years: Boston was about 30 points ahead of the average BABIP in 2011, and were more than 20 points up this past season, while the Rangers tend to bounce between the league average and a little better than that most years. Mike Napoli, for all of his power and patience, could use that extra boost in BABIP for his batting averages.

And, while as said his homers won't count more by clearing the wall by a greater distance, with the extreme closeness of the Monster in left, it is more likely his fly balls go yard. The same homers as above, with a Fenway Park overlay instead: 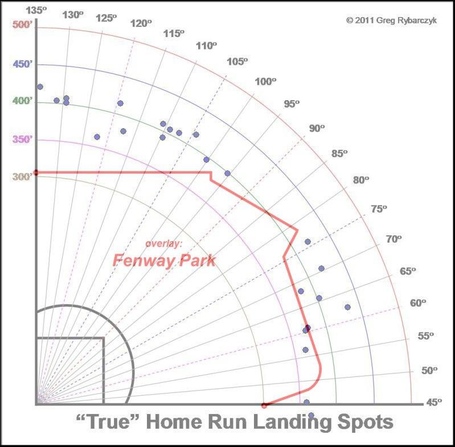 An opposite-field homer or two might get lost in the shuffle, but check out that pull power. There are plenty of fly balls in Texas that could be homers at Fenway to add to that, too -- like Jonny Gomes and Cody Ross, Napoli hits towering shots. The average apex -- the highest point any of his homers hit in their travels over the wall -- was 84 feet, well over twice the height of the 37-foot tall Green Monster, and the lowest height for any of his 2012 homers was 51 feet. Like with Gomes, even if you assume that not every ball will hit its apex at a point where it will clear the Monster, you can see where a few routine (but deep) outs could become singles and doubles, or maybe even homers. 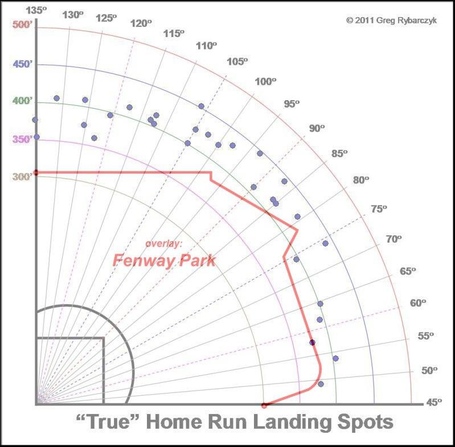 Once again, the Monster and the left-field power alley look to be cleared with ease, but a check on height confirms it: Napoli's 2011 homers had a max apex of 143 feet, and his "shortest" homer still topped out at 63 feet, more than enough to clear the fence at Fenway. His line drives don't tend to be homers, and while he might hit a laser that is a single instead of a double every now and again, overall, the wall is just going to keep giving and giving.

It's no wonder that, in the 73 plate appearances he's had at Fenway, Napoli has slugged .710 with seven homers. Expecting him to replicate that every night is a quick way to be disappointed, but it's clear that his swing, like that of many other right-handers, is a natural fit for Fenway and that wall in left. He might strike out often, but Fenway should help his keep averages up, and he already has the power and the patience to make a significant impact in the middle of Boston's order, the kind of impact the lineup needs.