Should The Red Sox Sign Mike Napoli For Four Years?

It might take four years to lock Mike Napoli up, but should the Red Sox go that far for him?

The Red Sox have a gaping hole at first base, one that isn't likely to be filled well by Jerry Sands. That's why Jim Bowden's latest on Mike Napoli is an important moment for a Red Sox off-season decision:

Mike Napoli holding out for 4th year from Red Sox...meeting with Mariners who might be willing to give the extra year according to sources

Boston would like to go three years with Napoli, a fact that's no surprise given his age and the expected timeline for their prospects. It might take a fourth to haul him in, though, if there is someone else willing to go that long. And as the Mariners are desperate for offense, and want their new, pulled-in fences to make an impression on future free agent sluggers, there is a very good chance that they would be willing to throw caution to the wind and go four on Napoli.

Should the Red Sox counter a Mariners' offer of four seasons with four of their own? The short answer: maybe. A longer answer is in order for this question.

Napoli will be 31 years old in 2013, and at the end of a four-year deal, would be finishing his age-34 campaign. That's not ancient, by any means, but Napoli's combination of power, patience, and low contact rates suggests he has old-player skills. This means he'll likely falter at a younger age than more athletic, more well-rounded players. Think Dan Uggla, for instance, who has power and patience, but his bat has started to slow, and that ruins his potential to be an impact player a little faster than it would for someone who can contribute on defense, or who has a higher batting average perch to fall from.

These players peak earlier, and fall off faster, than their more athletic counterparts. Jeff Zimmerman researched hitter aging curves at Beyond the Box Score, giving us this chart that displays peak trajectory for different player types: 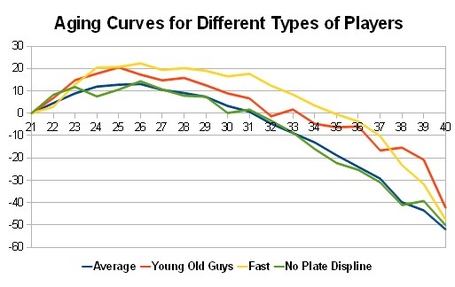 Napoli fits into the "Young-Old Guys" category, and you can see that things can start to get worrisome once this player type is on the wrong side of 30. This chart measures runs above average, and the young-old players tend to slip below-average by the time they are 32, and by the time that Napoli's hypothetical four-year deal would run out, they are even worse. For what it's worth, the aforementioned Uggla was in his age-32 season this past year, when his power production slipped to its lowest point, his batting average fell to .220, and he struck out 168 times while still leading the league in walks. If he can't speed his swing back up, or adjust to his declining skills, you can guarantee that pitchers will challenge him more often, cutting into the one area of value he has left in his offensive profile.

In essence, the Red Sox would be setting themselves up for a potential Uggla decline period with Napoli by sticking him on the club for four years. On the other hand, though, are young-old players like Adam Dunn. The designated hitter looked as if he were done at age 31 in 2011, but he rebounded this past season, hitting just .204 while leading the league in strikeouts, but he also walked 105 times while punishing pitchers who threw him strikes with 41 homers. That being said, Dunn is a huge risk going forward, as the only thing he had going for him in 2012 that didn't exist in 2012 was those homers. Should they vanish once more, he's going to struggle in the second half of his deal, a contract that runs parallel with Zimmerman's post-30 aging curve for young-old types.

This doesn't make Napoli an automatic no for Boston over four years, though. There is risk here, significant risk at that, but a few things are going to happen over the life of that contract that could make this worth all of that. Napoli is a great fit at Fenway Park, as a right-handed slugger with monster power. If any park was going to slow his decline, it would be the one with the wall 310 feet from home plate in left. Think Kevin Youkilis in 2011, a right-handed old-player skills type in his age-32 season, for a comparable here. The fact Napoli can catch helps him retain value, as the offensive thresholds for backstops are significantly lower than at first -- if his bat starts to falter, he can play more often behind the plate, and when David Ortiz is no longer playing, Napoli could spend his other days as a designated hitter, leaving first base open for a new acquisition that can still satisfy the position's needs.

Boston's immense financial resources would allow them to, in essence, hide Napoli's contract in its latter years. The luxury tax threshold will climb once more in 2013, and should be over $200 million by the time the fourth year of Napoli's deal comes up. Toss in the inflation of the dollar, the contracts that Boston will shed by the latter years of this hypothetical contract, and the intended plan of these Red Sox -- to load the roster up with inexpensive, cost-controlled kids -- and you can see where even a Napoli in full decline would be easy to hide on the roster in 2016.

Speaking of cost-controlled kids, first base is not a position of value for the Red Sox on the farm. Travis Shaw is the best bet to produce at the position, but he just got to Portland, and has many of the same questions about his bat speed and power at the upper levels that Lars Anderson did a few years ago. He's by no means a guarantee, and avoiding Napoli because Shaw is in the system isn't something the Sox are likely to do. Plus, as stated above, if Shaw does develop into a major-league first baseman, Napoli could always shift to DH when that spot opens up in two years.

Should Boston avoid Napoli, it's not as if the first base market is any more likely to help over the next few years. Not at a time when few major first base prospects have developed over the last few seasons, and most of the best from the last crop have been locked in to long-term deals. Part of the reason Adrian Gonzalez was a target for Boston to begin with is because there was a lack of available first baseman at reasonable prices coming up over the life of that deal. With Gonzalez in Los Angeles, Boston is now in the situation they wanted to avoid in the first place. Napoli could help solve that issue while they see what they have in Shaw and Sands, and since he isn't signing for the mega-money of other first basemen, it's not as if the extra years will cripple Boston's flexibility should they want to upgrade at the position through external means.

It's a risk, but handing Napoli a fourth year in order to benefit from the first two-to-three seasons the club was already betting on is a calculated one. Even if he falters by the end, the Red Sox have the resources to deal with that issue, and the potential value he could provide in the interim while Boston bridges to their future is well worth putting up with a mid-30s Napoli for a season. If it takes a fourth year to bring Napoli to Boston, then the Red Sox should consider giving him what he wants.