Two years for the traveling outfielder might seem odd, but Fenway could very well be the perfect place for him

Share All sharing options for: Jonny Gomes And Fenway A Perfect Match

The Red Sox entered the off-season with two outfield holes to fill, and an awareness that there could be yet another open in a year's time. That's why Jonny Gomes received a two-year deal from Boston, as he helps them in 2013, and acts as an insurance policy for outfield depth in 2014, if nothing else. While Gomes isn't a player to build around or anything like that, his signing might have more impact than expected, as his swing is just perfect for Fenway Park's dimensions.

Gomes is a right-handed batter who has plenty of power. He's had moments in his career where his power vanishes a bit -- it happened in 2011 while with Washington -- but mostly if his slugging is low, it's because his batting average was also unimpressive. You don't want to just wave that sort of thing away, but Fenway does boost batting average on balls in play, so some of that should be offset for Gomes in half of his games.

More importantly, though, is how Fenway is going to effect Gomes' power output. Depending on how a player's swing works, the Monster can, as the old saying goes, giveth or taketh away. If a player hits rocket line drives that result in homers with speedy exits from the park, they might see an increase in doubles with a few homers missing, victims of crashing into that 37-foot wall in left rather than fully following their low trajectory. If, however, they hit slower, taller shots, the kinds of fly balls that made Cody Ross such a great fit for Fenway, for instance, then there is bound to be a boost in homers. Doubles and singles should also see a boost as well, as some of those shorter fly balls land halfway up the wall instead of in an outfielder's glove.

Gomes profiles to have the same kind of success. We can see where his home runs landed in 2012, thanks to Hit Tracker Online: 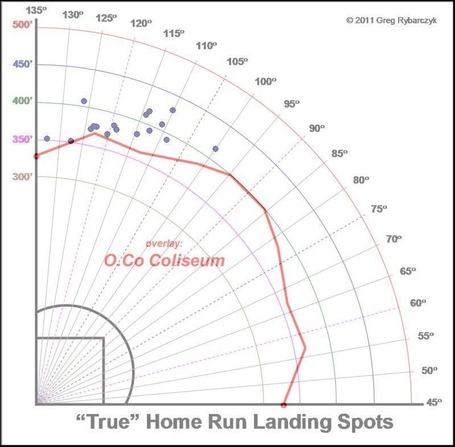 Most of Gomes' homers cleared the wall at O.co with ease, but a few just made it over. It should be noted that not all of these homers actually came at O.co Coliseum, either -- 11 of his 18 homers came on the road -- but since that park is a difficult one to go deep in, the fact these all had the distance to go out at home is an endorsement of his power. Stat Corner lists O.co as having a three-year park factor of 89 for right-handed homers, and 93 for doubles/triples. (That's 11 percent worse and seven percent worse than average, respectively.) Fenway, on the other hand, boosts doubles and triples for righties by 26 percent (126 park factor) and homers by 11 percent. To see that difference visually, we can use Fenway Park as the overlay for Gomes' 2012, rather than O.co: 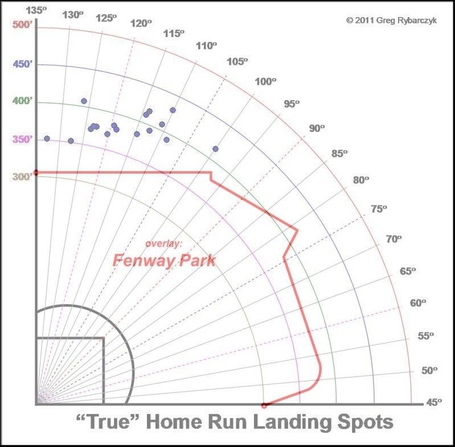 There's just a little bit more space between the wall and the landing spots of those homers when Fenway is involved. While overlays are not perfect representations for a variety of reasons -- weather conditions and wall height, to point out two obvious items -- for Gomes and in Fenway, there's a clear story here. Gomes has more than enough pop in his bat to clear the wall from a distance perspective, but does he have the kind of pull power that will go over the wall?

We can see more than just the landing spot at Hit Tracker, as the site also details the apex of a home run's trajectory, the highest point it reached in its travel. Of Gomes' 17 homers with complete data, all 17 would have cleared the Monster's 37-foot height with ease. Those 17 long balls had an average apex of 85 feet, topping out at 133, and coming in at 56 at the lowest. Now, the apex wasn't necessarily reached at the distance that the Monster sits at, but most, if not all, were high enough to be guarantees to clear or land on the wall.

Ross saw the same kind of boost at Fenway, where the pull-heavy right-hander hit 38 of his 54 extra-base hits in 2012. Gomes has a potential advantage over Ross offensively, though, as he's a far more patient hitter. Ross is a .262 career hitter with a .324 career on-base percentage, whereas Gomes, despite just a .244 average, owns a loftier .334 OBP. Most of Gomes' career has come in parks that favor pitchers, and that hasn't helped a line that's already lacking in the batting average department. That shouldn't be an issue at Fenway, though, meaning Gomes, his pull power, and his career 10 percent walk rate could be in for a career year in Boston this season.

There are still road games to worry about, but Gomes has already shown power that works everywhere, and the walks will help him even in parks where his batting average will likely be lower. For his career, he's much worse against right-handers, but again, most of that is just in batting average: his career ISO against righties is .202, so like Ross, you can still play him against the hand he's weaker against.

The real negative in Gomes' game comes defensively, as at his best, he's about average, and more often than that, he's a problem afield. The Monster will help him here as well, though, as the same short distance to the wall that could make him a beast at the plate will cut down on the range needed to field the position. If the Monster could make Manny Ramirez look like a solid defender 81 games per year, then Red Sox fans shouldn't have to worry too much about Gomes.

The Red Sox signed Gomes cheap for two years, to the kind of deal that they likely wish they could have signed Ross to last winter. Gomes should be able to put up the same kind of production, if not better, and is a potential answer in left for the club during this time when the impact prospects aren't quite ready to contribute yet. He might not have the fanfare of a Torii Hunter or Melky Cabrera, but there's an argument to be made that he can be just as good for the Sox. That argument stands 37-feet tall out in left, and it's one Gomes is likely to be very familiar with over the next two years.