Dustin Pedroia And The Aging Curve For Elite Young Basemen

Dustin Pedroia is really good at baseball. Seriously, it will surprise you just how good he is. With the rumors that Boston might extend Pedroia floating around the baseball world, I took a look at how second basemen of his caliber have aged.

Share All sharing options for: Dustin Pedroia And The Aging Curve For Elite Young Basemen

As Marc touched on last week, the Boston Red Sox are considering signing Dustin Pedroia to another contract extension. The 2008 American League MVP is already locked down until 2015, but Ben Cherington’s eagerness to lock him down even further into the future is understandable. Robinson Cano is almost certain to raise the already high bar for top tier second basemen with his next contact and Dustin Pedroia has been better than Cano overall in his six-year career.

There is risk with any long-term contact since players generally decline in their mid-thirties, but that risk seems even greater when the player plays second base. The keystone is a tough position. As the pivot on the double play, they are regularly in the unenviable position of trying to spin around and throw while blind to the runners sliding into them to break up double plays. The position is demanding and injuries are an even greater risk than any other position expect catcher.

Dustin Pedroia is not just your average second man, however. He has been one the elite players ever to play the position. He has averaged more than five rWAR over his first six full seasons, won the Rookie of the Year award, the MVP award, a sliver slugger award and two completely deserving Gold Gloves. Since 1920, only 12 second baseman have been more valuable than Pedroia by age 28. I am curious how elite players like Pedroia have aged while playing this brutal position.

Since 1920, 23 second baseman (with at least 60% playing time at the position) have accumulated at least 20 rWAR by age 28. This group averaged 4.8 rWAR per year through age 28 and includes the majority of Hall of Fame second basemen. Looking at this group, it certainly appears that elite second basemen are a fair bet to remain valuable as they age. Fourteen of these players produced at least 25 rWAR more after age 28. Along with Pedroia, one other player, Robinson Cano, has yet to play beyond age 28. One player, Hall of Famer Rod Carew, was extremely valuable into his mid-thirties, but had moved off the position. Among these elite young second baseman, just five players have failed to be produce at least that much value in their post age 28 careers. Several, like Chuck Knoblauch and Snuffy Stirnweiss saw their production drop off a cliff in their early thirties, while others like Tony Lazzari declined more gradually. Overall though, the outlook for an elite second baseman is fairly good if this admittedly small sample is any indication.

This chart compares Dustin Pedroia’s rWAR by age with the averages from this group of similarly productive second basemen who have played past age 28. 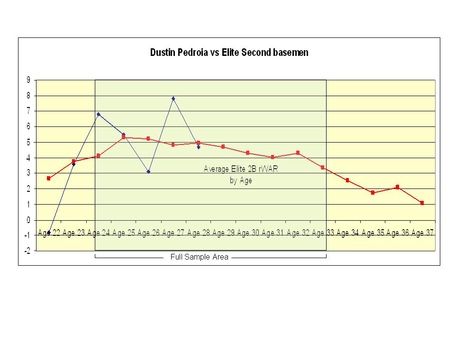 The complete sample* of 18 players is only represented in the shaded area, as a few players did not break in until age 24 and after age 33 a number of these elite second baseman retired. I elected not to factor in retired players as 0 rWAR in the averages, so production outside after age 33 assumes continued play, making the drop-off less dramatic than it would be otherwise. The sample drops from 18 to 13 at age 34, goes back up to 15 at age 35 and drops there after to 13 (age 36), and 11 (age 37).

* World War II cost Joe Gordon his age 29 and 30 seasons and Billy Herman his age 34 and 35 seasons, Ryne Sandberg did not play at age 35 but returned and played two more seasons thereafter. Chase Utley is still active at age 33.

It says a lot about Dustin Pedroia’s incredible abilities that he can have an off year battling with a broken thumb and still be an average member of this elite group of second baseman. His peak seasons are roughly following the established curve to this point, if not exceeding it. His current deal will keep him with the Red Sox until his age 32 season. By that point, even elite second basemen trail off, declining to slightly above average to average production in their age 33-36 seasons. With this in mind, an extension that buys two to four extra seasons of Dustin Pedroia at second base for a cost of between $15M-$18 in AAV looks fairly reasonable. There is a risk that he will follow the path of Knoblauch or Stirnweiss, but it appears at least equally as likely that he will follow Lou Whitaker and Joe Morgan’s path of sustained late career production, making such a deal an extremely good value. Given just how close Robinson Cano is on this list, locking Pedroia up before the rival Yankees remake the market is probably a good idea.

This is by no means an authoritative study and its predictive value is limited by the small number of elite second basemen. I think this information is worthy of consideration though, precisely because Dustin Pedroia is such a rare talent. He did not just meet the qualification of 20+ rWAR by age 28, but easily surpasses it. Most Red Sox fans don’t need any reminders about just how special Pedey is, but I bet few realize he has produced more than Hall of Famers Charlie Gehringer, Nellie Fox, Ryne Sandberg and Bobby Doerr had by the time they were his age. Only four players who top Pedroia in production here are NOT Hall of Famers (and two, Bobby Grich and Lou Whitaker probably should be). Whether or not this information proves to be any indication of his future performance, it is worth noting that Dustin Pedroia is not simply one of the great young second basemen in the game today, he is one of the greatest young second basemen to ever play the game. Even setting aside everything else he means to this team, this city and this fanbase, if Boston is going to risk a long term contract on anyone, it should be Dustin Pedroia.