Felix Doubront and the Effects of Fenway Park

Rookie Felix Doburont has shown us reasons to be excited about his future and given us cause to doubt it in almost equal measure this year. He is already an elite strikeout pitcher but he struggles with his control and with the long ball in dramatic ways. One thing that isn't helping him is that giant green wall in left field.

Share All sharing options for: Felix Doubront and the Effects of Fenway Park

Last week, I took a look at Cody Ross and how his hitting style made him uniquely suited to play in Fenway Park. Right handed pull hitters like Ross have always made good use of the Green Monster, but their baseball negative, left-handed fly ball pitchers, can be equally victimized by it. Legend has it that the great Bill Lee asked "Do they leave it up during games?" upon first seeing the colossal wall in left. No one can better relate to that sense of dismay than rookie lefty Felix Doubront.

Doubront has had an unusual season. Among qualified pitchers, he has the fourth highest strikeout rate this year, beating out Tim Lincecum, Justin Verlander and Clayton Kershaw. Control has been an issue: his 3.97 BB/9 are almost a full walk above average, but the real issue has been home runs. His 15.9% HR/FB rate is the fifth highest among qualified starters and this has created a significant gap between his ERA (4.86), his FIP (4.38) and his xFIP (3.82). This may actually be a good sign for the lefty going forward- as HR/FB rate is generally considered unstable. He is therefore likely to regress toward the league average which is generally around 10% (though this year the ML average was 11.3%). Of those players above him, only Mike Leake, who plays in one of the most home run friendly ballparks in the game, has consistently posted a rate well over league average. However, Doubront is a fly ball heavy lefty playing in a home park that significantly punishes those type of players and as such, he may never match the promise of his peripherals.

Doubront has been better on the road than at home by every measure. His ERA at home is an ugly 5.33 while on the road it is just a weak 4.37. This is almost entirely due to opponents racking up more extra base hits at Fenway. Hitters slugged .475 against him in Fenway and just .399 on the road. There is only a slight discrepancy between opponent’s OBP (.340 home vs. .333 away) but opposing hitter’s have done better on contact and made more contact at Fenway against Doubront by a fairly extreme margin. Since they don’t take the Monster down during games, it is no surprise that much of that is due to a huge leap in doubles, Fenway’s signature effect. Doubront has allowed 21 doubles in 82 2/3 innings at home and just 13 on the road in 78 1/3 innings. Such is the burden of being a lefty in Fenway. The surprising thing for Doubront is that he been more home run prone at Fenway then on the road.

Fenway is not a home run friendly park. It suppresses home runs by 8% for lefties and 2% for righties. Doubront doesn’t need to worry much about lefties, just 5 of his 24 home runs have gone to lefties, but the success of righties against him at home is troubling. 13 of his 24 home runs have come at Fenway. Despite Fenway’s negative effect on home runs and the fact that Doubront has been less fly ball prone at home, he still has a 16.9% HR/FB rate in compared to a 14.9% rate on the road. One look at the ESPN home run tracker and it is easy to see where these home runs are going. 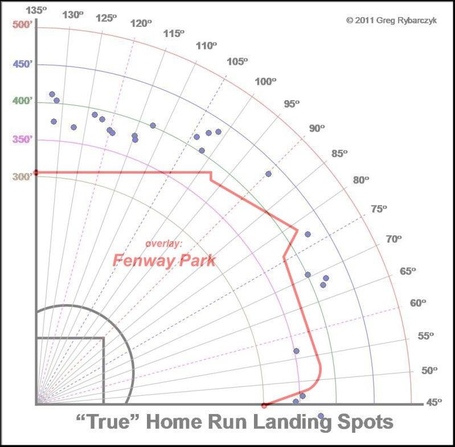 While Fenway typically reduces home run rates, it is clear that Doubront is ill suited to take advantage of that. The vast majority of his home runs have gone out to left field. Fenway allows fly balls between 310’ and 350’ a better chance at becoming round-trippers than most other parks and that is no good for Doubront. To add to his woes, he has even be victimized by several shots curving around the Pesky Pole area, showing just how bad his luck with the long ball has been. His Fenway home runs have averaged less distance (392.8’) than his away home runs (395.6’) and less speed off the bat (103.1 vs 104.5 mph). Right handed hitters can simply try to get under a pitch that they can pull and hope for a double or even a short-porch home run. This appears to be exactly what is happening. Doubront has tried to pitch righties away, but they have waited for middle-to-inside offerings and when they have gotten them, they have elevated them.

Doubront can certainly make an adjustment and improve upon this but the increased groundball rate at home combined with a lower strikeout rate there may indicate that he has already been trying to focus on pitching low in the zone and away from hitters more at home already and has just not been successful. The expected regression may also help, but it is hard to imagine that he will simply regress into being a pitcher that can thrive in a park that so poorly suits him.

This is not to say that the Red Sox should give up on Doubront or that they should look to trade him. Earlier in the year, I wrote about how well he compares with other 24 year old pitchers. He has kept up most of the positives that led me to compare him to Johan Santana and some other Cy Young-caliber guys. As a lefty with killer strikeout abilities, Doubront could very well emerge as a top of the rotation type of pitcher, be damned. For that to happen, he needs to get better at staying out of the middle of the strike zone and improve his walk rate. If he can do that, the damage pitching in Fenway does to him will be far less dramatic, even if he is still less effective there. It is hard to believe that after such a difficult season, other teams would be willing to give the Red Sox fair value in trade for Doubront, but if they do decide to make him available, he could be an outright ace for a team playing in a park less suited to right handed hitters.