Most of the playoff teams in the AL have been decided, but the order and last wild card spot is still up in the air.

Heading into the weekend, not a single American League team had clinched a playoff spot yet. That all changed on Sunday, with the Rangers, Orioles, and Yankees all securing, at worst, one of the two wild card spots. (One of Baltimore or New York will win the American League East, meaning that, if necessary, Texas can take the other wild card spot.) The AL playoff picture hasn't entirely developed, though, as the Rays and Angels remain alive, the AL Central is undecided, and the Rangers and A's will square off to decide the AL West in the season's last three games. 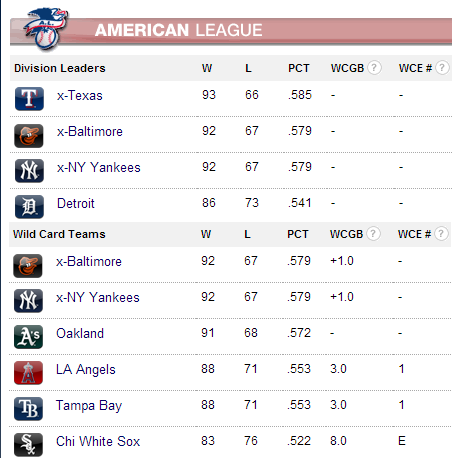 Detroit is currently leading the AL Central by three games, meaning Chicago's elimination number is one. The Tigers face the Royals the rest of the way, the White Sox the Indians, and the division is going to be the only way in: Chicago has been eliminated from the wild card race. A Detroit win or Chicago loss will be the end of things for the White Sox season.

The A's are two back of the Rangers in the west, meaning their elimination number is two. Losing to Texas at all will take care of that, since they're facing each other, so the A's will need to sweep to avoid the wild card playoff round. The A's would need to be swept by Texas to miss the playoffs, though, and that's not all: either the Angels or the Rays would need to sweep their respective opponents (the Mariners and Orioles, respectively). This is close to sealed up, since a single win by the A's or a loss by the two clubs chasing them would lock up the two wild card spots.

The Red Sox lost three games to the Orioles this past weekend, keeping them on pace with the Yankees. There's still intrigue to be had in the AL East race because of it, as they will both be in the playoffs, but it's unknown as of now who will have to play in the wild card Thunderdome series, and who will get to skip to the ALDS.

So much can change tonight, when every team still in this thing takes the field. If you were just going to pay attention to one more day of regular season baseball this year, this would be the one.