2010 revealed many truths. Among them, Barrack Obama is not a Muslim Socialist Nazi, Leslie Nielsen was not, in fact, eternal, and, with Jason Varitek reaching 112 in catching years, the Red Sox were going to need a new starting catcher. So, in one of Theo Epstein's last grand experiments in Boston, Jarrod Saltalamacchia was stolen from the Texas Rangers for some chewed chew and an autographed picture of Jamie Farr and fitted for the starting job.

Many were skeptical. Some probably on this very blog. Perish the thought! Some thought the Red Sox were using Salty as a place holder until the trade deadline, apparently unaware that All Star catchers are not traditionally distributed willy nilly in celebration of the coming of August. The Baseball Prospectus 2011 Annual was more sanguine (though not actually sanguine), predicting Salty to hit .237/.309/.396 in 341 plate appearances. That would be good for 0.8 WARP (Wins Above Replacement Player). Not awful considering the competition and what the Sox gave up, but not anything to be extraordinarily proud of.

Salty ended up accumulating 1.04 WARP, so in your face, BP! According to Fan Graphs, Salty accumulated 2.5 fWAR, good for 13th overall among catchers last season. Baseball Reference is a very frustrating site and impossible to find a list of qualifying catchers on. I think the point stands anyway. Salty was fine, decent, and all right. He was better than the worst fears of many and was never the black hole others were afraid would prevent\ the Sox from contending.

But could he have been a whole lot better?

As you can see, Salty bookended a good season with two lousy months. In the middle four months though, dude hit really well. To further illustrate the point, here's a graph of Salty's OPS by month: 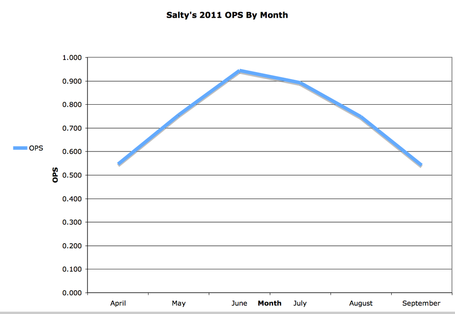 OK, so I won't be winning any graphic design awards, but you can see a clear trend here. If you're worried about weighting, his plate appearance totals bounce around a little bit, but for the most part the monthly totals are similar. (If you don't believe me, you can check here.)

Salty was bad in April and September (much like the rest of the team, by the way) and pretty darn good the rest of the time (also much like the rest of the team). Were there any good reasons for the bad months? You don't have to stretch too far to come up with some. It isn't hard to chalk April up to pressure. On a new team and taking over for a popular player, Salty struggled. By the time September rolled around, dude was dog tired. He played in 103 major league games last year, more than he'd ever played in before and 91 more than he played in last season. That's a recipe for wearing down if I've ever seen it.

[Sure, fine, maybe it wasn't pressure, and maybe he didn't 'just wear down.' Maybe it was just two bad months by a mediocre player, but that probable truth goes against the narrative here. Stay on message here, people!]

But excuses or not, here's the point: between May 1st and August 31st, Salty hit .259/.321/.510 with 13 homers in 262 plate appearances. Extrapolate out to 500 plate appearances and that's 25 homers from your catcher. Legally you can't ask for more than that. And, the amazing thing is, minus pressure, witch curses, black cats, ladders, and tiredness, Salty gave it to you. He was one of the best starting catchers in baseball last year if, you know, you don't count the times when he wasn't.

Four months of baseball might not mean much. In fact, sabermetric orthodoxy teaches us it means next to nothing in terms of predicting what is to come. Monthly splits are arbitrary to be sure. And yet, as fans we can hope Salty showed some of the talent we've been hearing about for years. Maybe, just maybe, he can play like that for more than just four months in 2012.

He'll be 27 years old next year and coming off the best performance of his career. I know Ryan Lavarnway is waiting in the wings (maybe), but Salty might not go as quietly as some think.