Prince Fielder signed a nine-year, $214 million deal with the Tigers earlier this week. It seemingly came out of nowhere, but the Tigers, Nationals, Dodgers, and possibly others were all in on Fielder seriously, just under the radar. That was the price it took to sign the first baseman, and while other teams decided not paying at all beat signing up for nine years of a guy whose body might betray him as he ages, the Tigers took the plunge.

Last winter, the Red Sox signed Carl Crawford to a seven-year, $142 million deal. Excitement was the initial response, but a poor debut with Boston has given his detractors reason to loathe the deal, while his supporters are just waiting for 2012 to begin in the hopes they're on the right track in regards to his future.

Which of these two deals is less risky? Which would you rather your team be responsible for? Inspired by The Platoon Advantage's Bill Parker, let's do a little digging.

Crawford has six years remaining on his contract, and is owed roughly $20 million per year for the next five years, then $21 million in the final year of his contract in 2017. He has no-trade protection from just two teams, and if any of the others get him, he can't be traded to the Yankees after.

Crawford isn't as obviously productive as Fielder, who is good because he hits baseballs very far with regularity. Crawford is a far more complete player, though. The 2011 season was marred by a serious April bout of trying too hard, as well as a definite mid-season injury to his hamstring, and possible wrist problems that were surgically repaired this off-season. Historically, though, Crawford is an above-average hitter for left field, a spectacular defensive player, and one of the top baserunners in the league.

Not just in terms of stealing bases, either, but in the sense that he goes first-to-third and second-to-home better than most. Ellsbury and Crawford are close in speed, but the former has nothing on the baserunning skills of the latter. There are extra runs worth of value to be squeezed out on the bases, and Crawford has added anywhere from a few runs to nearly a win in value per season just from that aspect of his game.

Defense peaks earlier than offense in players, though, so certain parts of Crawford's value might decline sooner than Fielder's bat. Then again, Crawford is famous for being a workout fiend, and part of the reason the Red Sox signed him is due to how well they thought he would age. Speed players tend to age well to begin with, and Crawford will be just 35 when his contract ends. He's not exactly going to be ancient at the end of this thing, even if seven years is a long time on the surface.

It's tough to be wholly optimistic about Crawford's future, thanks to his 2011, but there are reasons to think he'll bounce back and provide the value the Red Sox actually signed him for. Will he end up overpaid? Sure, but that's the price of doing business on the highest end of free agency. And, if you're comparing him to Fielder, there are plenty of reasons to prefer Crawford's deal, even if, speaking in terms of total production, they are similar.

You could say Crawford has been inconsistent in his career, but you can't do so without also mentioning Fielder is guilty of the same. Take a look at Fielder's wins above replacement over the years, from Baseball Reference, Fangraphs, and Baseball Prospectus, respectively:

WAR isn't the end all, be all, partially because defensive value is so hard to approximate still, but these numbers aren't bouncing around due to defense. Fielder's power is all over the place year-to-year, with his Isolated Power reaching .300 or better twice, but mostly sticking somewhere in the low-to-mid .200s. There's nothing wrong with the less productive offensive campaigns in the sense they are still generating quality offense, but when combined with Fielder's defense, you get a player who is always going to be paid to be elite, but might deliver to that level about one-third of the time. Or half, depending on who you ask. The perils of WAR.

Either way, not nearly enough, when you consider how high-risk he is as a player. The Tigers' reasoning for wanting him is clear: they would like to win while they have their Justin Verlander/Miguel Cabrera core in place. But the fallout from that is unlikely to be pretty, and while it's easy to bust out the "flags fly forever" mantra, try telling that to Red Sox fans who expect to be in this thing every year.

Fielder isn't always elite in his younger years. What about as he gets older? His body hasn't betrayed him yet, as he's managed to keep on hitting (and remain very durable) for his entire career. But Fielder will just be 28 in 2012, and bodies change. Metabolisms change. Look no further than Prince's own dad if you want evidence of that.

Heavier players do not age well. With Prince Fielder in mind, Ryan Campbell ran a study at Fangraphs that showed how much faster heavier players tended to see massive drops in performance relative to their lighter peers. Check out the graph, based on 205 players with a weight of at least 3.25 pounds per square inch (i.e., a six foot tall player would need to weigh 234 pounds) for a quick glimpse: 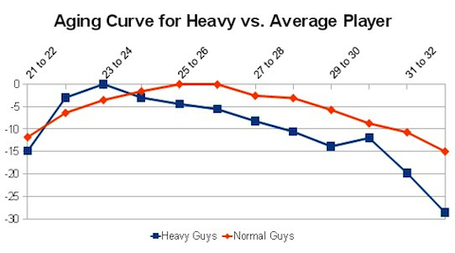 Fielder is already past the point where the two lines converge, and while he is better than your average big guy and has room to decline, things get ugly fast.

We have two players who have been inconsistent for different reasons over the years -- Crawford's value takes a hit when he injures a leg, and Fielder's defensive issues and lack of non-hitting attributes mean he lives and dies at the plate. There are huge risks involved in any long-term contract, but Crawford owns both the shorter-term (and less lucrative) contract, as well as a body profile that gives him a better chance of aging well. Fielder, more expensive, stuck in Detroit until he's 36 years old -- that graph above only goes through age-32, and it's already not that pretty -- and with a physical profile almost the exact opposite of Crawford, is potentially the much higher risk, even if he's the more obviously productive of the two at present.

There are exceptions to the aging curve for heavier players, of course. David Ortiz hasn't always been the slimmest designated hitter on the block, but he's doing pretty well for himself in his mid-30s. Mo Vaughn saw a definite drop in performance in his 30s, but stuck around until he was 35, while remaining useful up through his age-34 season. And not every speedster ages well, either. But if you're measuring the risks inherent in both of these players, relative to the contracts they signed, then it's an easy choice as to who you would rather have.