Share All sharing options for: Translating Dice-K or Matt Kory Offends Multiple Continents In Under 2000 Words

Browsing the internet as I am wont to do, I came across this via Joy of Sox. For those of you who might be clicking impaired, it's an article from Nikkansports.com, a Japanese website. There really isn't much point in clicking it anyway, as the article looks like this: 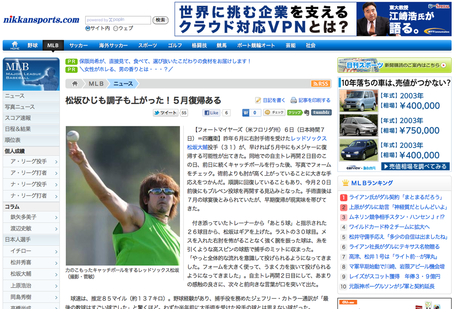 As you can see, there is a picture of Daisuke Matsuzaka of the Red Sox prominently displayed. The discerning reader will also note the text is in Japanese. You and I may be different in this way, but I am not fluent in Japanese text. In fact, if, like me, you are a product of the American educational system it's a fair bet that you aren't fluent in English either, but I'll leave that be for now and focus on the point at hand.

To me, this article is 1) about a Red Sox player and 2) indecipherable gibberish. My under-educated brain is no more equipped to read Japanese than it is to write a thesis on World War One era Germany*.

*I actually did this as, through a clerical error, I attended an undergraduate institution that thought it "useful" and "educational" to physically force their students to write an 80 page theses. Compounding this problem I elected to write about a war whose meaning and overall global footprint was only exceeded by its ability to put undergraduates to sleep.

Enter the miracle that is Google Translate. Allan at Joy of Sox did the dirty work (in his words, "All I did was hit the, "Do you want to translate this?" button."). In doing so, he opened up a whole new world of entirely different indecipherable gibberish. That's because Japanese and English don't translate directly. But, that doesn't mean we can't figure out the meaning behind all this together and have a little fun in the process. Because if there is anything I've learned from watching mind-melting Saturday morning cartoons for hours upon hours at a time, learning is fun!

It's difficult to tell exactly where the time stamp ends and the article begins, so we're off to a flying start. I Googled the name "Mamoru" as I was unfamiliar. It seems Mamoru is a Japanese name referring to either an actor, an astronaut, or possibly a fish. Or maybe all three. I can't be sure.

Red Sox Daisuke Matsuzaka pitching (31), also returning to major in early May likely to come out. This day in training camp where she resumed the second day, after catching the ball following the previous day, check the form in photos.

As a non-fluent in Japanese it is hard to say for certain about the gender specificity of the language, but it sure does seem like they referred to Daisuke as a girl two sentences into the article. In America that's known as bad form. The next time you see Peter Abraham call Carl Crawford a girl or the New York Times editorial board refer to Michelle Obama as "that dude" will be the first.

In fact, I had always heard the Japanese media fawned over Dice-K. I hope not because if this is fawning the Red Sox have been sold a bill of goods. The one other entirely plausible theory is that, unbeknownst to all of us but the reporter, during his Tommy John surgery Matsuzaka underwent concurrent gender reassignment surgery. Sort of a two for one special. Though if so, that has been under reported.

Seized the great feedback that elbow to higher than before surgery. There also has been recovering well and expected to resume throwing bullpen was even around August 20. Immediately after surgery was seen in July and after relief came early return is closer to reality.

Now we're talking pitching mechanics. Matsuzaka may be back early, which, despite his reputation on these interwebs, is a good thing for the Red Sox.

The trainer was in attendance, "five more balls," and directed from the first 26 balls, raised the gear Matsuzaka. 30 second last ball. Without a strong arm ball swung into the female scared right elbow, catcher mitt fits in with such a high spin hypothenar of stringy. "I have to cast the overall flow and barely conscious. With great form, has become by far the ability to cst well." The second day of training camp and resume, to feel good for much, leaving a positive word's mouth one after another.

OK, so there is definitely some gender thing going on. Do Japanese people have male and female elbows? Do I have a male and a female elbow and nobody ever told me? I'm asking legitimately. Here we are in the twenty-first century, the dawn of the scientific era, and the gender of our elbows has not been fully explored.

Further, I see another word with which I'm unfamiliar in "hypothenar". The Wikipedia tells me that it, "refers to a group of three muscles of the palm that control the motion of the little finger." So we know it isn't that.

One more before we move on: tell me this isn't one of the all-time greatest baseball quotes, "I have to cast the overall flow and barely conscious." This quote belongs in the Hall of Fame. Unless it's been using steroids in which case it's ruining quotes for other quotes and cheating and we won't elect it on the first ballot, and probably not the second. Maybe somewhere around the eighth ballot we'll really start to think about it.

Joe Buck: Mariano Rivera in from the bullpen for the Yankees...
Tim McCarver: removes pants
Buck: And the pitch... strike over the outside corner.
McCarver: That pitch had some urgency to it, Joe.
Buck: Yes. [long pause] Don't forget to watch America's Most Painful Crotch Injuries, tonight on Fox!
McCarver:
Buck: Why did you say 'removes pants' earlier?

And ball pitcher who had major surgery just six months ago seem ball.

This one got me. Twelve words into a thirteen word sentence and I really thought I was going to get the whole thing. I mean, sure "ball pitcher" isn't the smoothest English, but the point gets across without issue. But Matsuzaka seemed "ball"? I'm pretty sure I've heard my three year old say that to my other three year old. So close, yet so, so far.

In fact, I realized the difference between the Red Sox before the surgery itself. After the pitch, check the newspaper photographer shooting pictures of pitching form. "I feel that the higher up than they think his elbow. Throwing up from last year is terrible (laughter). Looks stronger than the forces that have put their own condition. The center of gravity down. However, even throwing a light, I feel as if the power transmitted to the ball. Matsuzaka finished look at the pictures is "showing good thing Moraimashita" and said with a smile.

The past few years, but came through trial and error, the height and release point of the elbow. During rehabilitation, trunk, including the hip, pulled lower body thoroughly bullied. In terms of dietary intake of carbohydrates ahead of even New Year "has us a little bit," says managing so ill. The result is a well-balanced proportion of the total recovery of the elbow, a modified form and is nearly ideal.

After reading this stuff for a half hour or so now (I've re-read it multiple times), it's strangely starting to make some sense. It's like those pictures at the mall where you relax your eyes and all of a sudden you see a ship. Or, in rare cases, a picture of your future self in twenty years (you look like Norm from Cheers). This causes you to drink several Orange Juliuses. In any case, Matsuzaka had trouble with his release point over the past few years (no news flash, that) and he's been able to ramp up his throwing and eating ahead of schedule and... wait a minute. Ramp up his throwing and... eating? Uh oh. [drinks Orange Julius]

Practicing pitching in the bullpen and the next step, you set on May 20. Shita cautious about. Executive pitching the next day feeling well at the moment no abnormalities. The pitch was warmed before and after care and careful icing pitches are not missing, "It is or was never put more thought, I'm relieved. Response is not bad elbow." In the future, further distance, extending the number of spheres, we move to step up the intensity. Even if free hit well early in camp, in late March has also seen pitched in minor battle.

This is starting to sound a bit like the Radiohead song, Fitter Happier, which features a computerized voice intoning unrelated slogans one after another. In any case, Matsuzaka is pleased his elbow hasn't blown up like the Hindenburg again. He's going to throw at longer distances soon. This will involve spheres. And urgency. And probably fish.

While I enjoy the urgency of the sphere, which sounds like a bad one man play staring Klinger from MASH, we've added a new phrase to our lexicon: "minor battle." This doesn't refer to the first day of Gettysburg or the battle of Lexington, but to a game between the Kalamazoo Celery Eaters and the Terre Haute (IN) Hottentots. That is, without a doubt, the greatest hyperbole ever.

Of course, going to hurry, not going to show up rapidly.

I think, at this point, it must be said: huh?

However, during the season Darvish, Wada, in order to bandy Our Images from the WBC with a colleague, feel a strong wish to return to scale up." Good condition, has become a sign. But that is not 100% clean, I would like mon." After practicing a soft look, Matsuzaka was a testament to feedback.

And we end on a paragraph that, strictly speaking, makes as much sense as an episode of the sitcom Small Wonder. For those unfamiliar, Small Wonder was an entire TV show based on the idea that a small child was really a robot. This required a roughly six year old actress to act like Viki the robot. And walk like a robot. And turn corners at a ninety degree angle. And talk like a robot. And make robot jokes featuring robot-related puns. The entire show. Every episode. Every scene. It's excruciating. I believe the military currently uses old betamaxs of the show to torture interrogate prisoners.

Unlike the above text though, Small Wonder was dumb. Incredibly mind-achingly dumb. But the text isn't. I mean the original text, not the translated text. The translated text is dumb. But that's only because translating Japanese to English is really hard. There's probably an art to it, and asking a website to make that art come together might be stretching the limits just a bit. At least for now we know Matsuzaka is on the healing track. That was totally worth 1900 words, right?