O Bard, Where Went Thou?

Share All sharing options for: O Bard, Where Went Thou?

It doesn't seem all that long ago that Daniel Bard seemed to be made of the hardest adamantium that money could buy: there was that brilliant stretch of nearly two months where he didn't let up a single run, and opposing batters were completely powerless against him—figuratively and statistically. Those days seem to be long past, however, as these days Bard seems to give up multiple runs as often as he has a clean inning. So what could be behind this trend?

A little digging into Pitch F/X shows some possible answers and, sadly, none of them are very encouraging.

So let's begin with the easy stuff. To make life easy, I decided to take two outings from the season: one from the middle of his hot streak, on June 21; the other is essentially three months later, his loss-"earning" effort against the O's on Tuesday night.  Here's the breakdown of pitch velocities from the two outings. 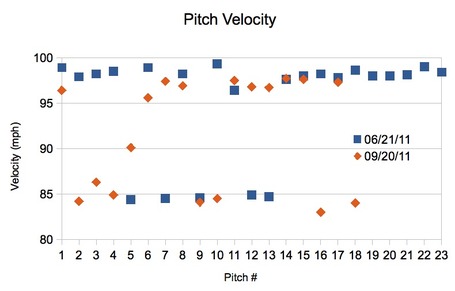 So, first off, let's throw out the 90 mph pitch from Tuesday night, as it's the only changeup he threw in either outing. Now, if we divide the pitches into fastballs and sliders, we get two groups, each of roughly comparable size to examine. Let's start with the fastballs:

So we already see that there's a drop in velocity over the three months. Perhaps some of it is due to fatigue—wear and stress on the arm usually does take its toll. However, it's not exactly an alarming dropoff, and it might be possible that it's just a one-time incident. Maybe he had an off day, or was struggling with an illness and isn't quite at 100%. If that's the only change, we'd maybe have reason for optimism. But I don't think it's quite that. Let's take a look at the spread on the slider:

What jumps out here is that the difference in the slider is not a velocity problem. In fact, his velocity is essentially the same on the slider. So what's changed? Well, now it's much less consistent than before. In June, his sliders were essentially always 84 or 85 mph. You can see it in the graph—there's almost no drift in the velocity. Come to September, and we now see there's much more spread in the velocity. As this rut has continued, it's less predictable. At the same time, however, the delivery of his pitch has, oddly enough, become more consistent! 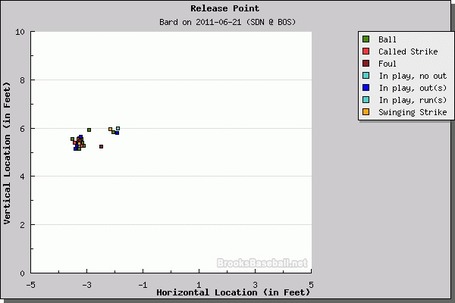 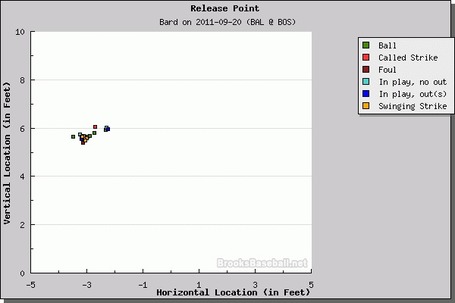 Even to the untrained eye, it's clear that the pitches from September are more tightly focused—there's less variation in the release point compared to where they were in June. However, the frightening part is that the consistency he had in release in September now seems to be compensated for by a loss of the pinpoint accuracy he had earlier in the year. Take a look at the difference in where the pitches ended up: 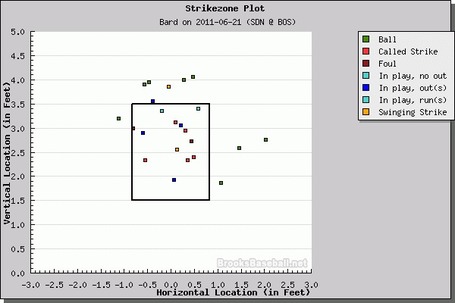 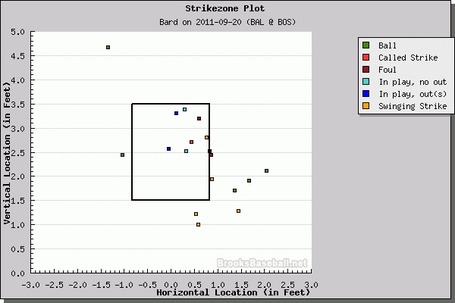 So, we see again that it's very weird—back in June, Bard's pitches were up much higher in the zone, and they were more tightly clustered over the center of the plate. Now, however, his pitches line up much closer to the edge of the plate, with quite a number well off and practically over the batter's box. As a result, because he's drifting much closer to the edge, it's probably quite a bit harder for him to get the strike call; too many pitches flirt to the edge, and what could be strike three could easily be called ball four. I don't have a logical reason, though, for why his pitches should be easier to hit when they're down (at least relative to what they were in June, when they were all practically over the middle of the plate.

In all, it seems that it's a combination of problems:

In the end, though, the Red Sox need good Daniel Bard to make it through the playoffs if they want to reach the promised land. Unfortunately, this seems to be very much a pipe dream at the moment—unless a few days off for Bard can correct the nature of his problem, and soon.