Another Call For Robot Umpires

Share All sharing options for: Another Call For Robot Umpires

Maybe had it continued as it should have, the Red Sox would have won, or maybe they wouldn't have. I'm not here to predict the future, which is good for all involved. But at the very least, the game should have been tied, there should have been runners on the bases, and the Blue Jays should have had another shot at scoring against a fading Jonathan Papelbon.

Games should never, ever, end as Tuesday night's did. It is embarrassing that MLB would allow any missed call, let alone one of such importance, to stand. I'll put it as plainly as I can. Major League Baseball must institute instant replay in some form, and do so soon.

The play in question (screenshots from MLB.tv) took place in the ninth inning with two outs. John McDonald singled hard to left field. Darnell McDonald fielded the ball and threw home. Catcher Jason Varitek caught the ball and turned to make the tag on the sliding runner, Edwin Encarnacion.

In the first picture, Varitek has the ball and Encarnacion is sliding. During the slide, Tek's left leg, planted in the ground like a cornerstone, blocks Encarnacion's left leg from crossing the plate. The collision between left legs causes Encarnacion to helicopter around. Note the perfect positioning of home plate umpire Brian Knight. 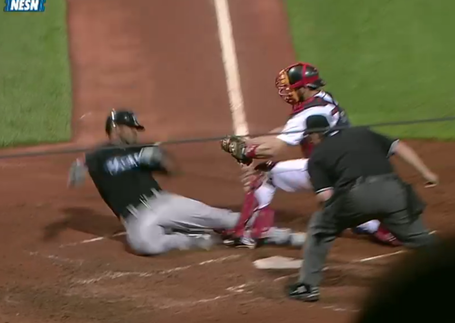 The helicopter motion has begun, as Tek's left leg has blocked Encarnacion's left leg forcing the runner's momentum to spin his body around. Tek's block of the plate has been so effective that he has knocked Encarnacion off his path and away from the catcher. As such Tek is unable to tag him. You can see Tek extend his arms, trying to tag Encarnacion, but he's out of reach. At the same time, you can see Encarnacion's right leg, whether accidentally or not, is right next to the plate. A split second later it touches the plate. You can see where Tek's glove is (nowhere close). 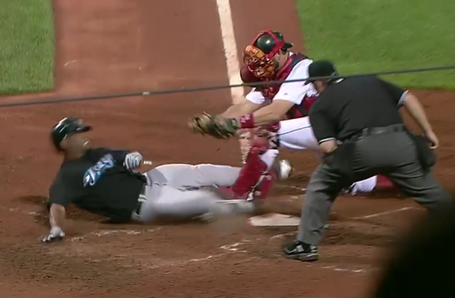 Below is the tag. At this point Encarnacion has spun around and his right leg has crossed the plate. Again, notice the positioning of the home plate umpire, Brian Knight. It's perfect. He's standing exactly where he should be standing and he's looking exactly where he should be looking. And he still missed the call. He missed it because this stuff is really hard. It is unreasonable for anyone to expect an umpire to never miss a close call, yet that's exactly what MLB's replay policy does. 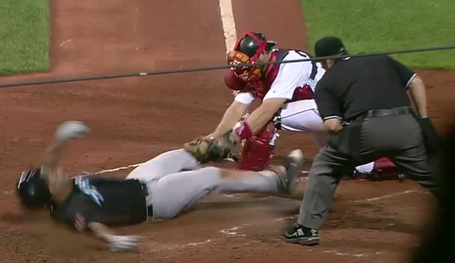 Here, from down the third base line, is the moneyshot. Tek's glove is over and above Encarnacion's left knee. Meanwhile,  Encarnacion's right foot is clearly on the plate. 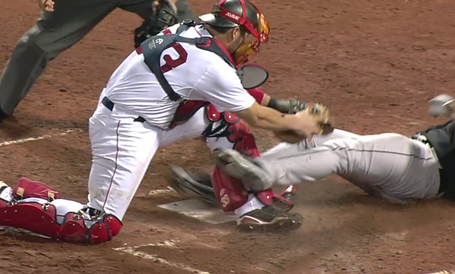 Here's a GIF of the play, taken from Mike Petraglia's column on WEEI.com (click if it isn't moving). You can watch the play over and over. Tek blocks the plate, knocking Encarnacion off his intended path. Tek reaches for Encarnacion but can't tag him, meanwhile Encarnacion's right foot touches home plate.

While it was difficult to see on first viewing, the runner was clearly safe. The call was wrong and it altered the game and the standings. If MLB had had a replay system of just about any sort, a review would have revealed the run should have counted quickly and without question. Like Armando Galarraga's imperfect perfect game last year, the embarrassing result of this game was entirely preventable. Indeed, it should have been prevented and as a baseball fan, it's a shame the game ended as it did, regardless of who won.