Hello. Matt here. Italics are the gateway drug to Series Previews. Now that you've tasted one you must taste the next! Enjoy.

It should be noted that whatever I write here is subject to revision by Olney Guillen over Twitter.

Individual game notes after the jump!

- According to Pitch f/x data, Tim Wakefield's fastest pitch this season was a 75 mph fastball. Daniel Bard's fastest was 101 mph. Them thars what city folk call a change of pace.

- Ozzie Guillen is currently hatching a crazy new strategy. I've been informed that it's so crazy it just might work. Details are sketchy but my understanding is it involves clown cars and several hundred gallons of cottage cheese.

IT'S GOING TO HAIL THE SIZE OF CANNED HAMS!

- Jon Lester hasn't had much success in his career against the White Sox. He's got a 5.94 ERA in 36.1 innings versus the paler hose. In his last two starts against Chicago, Lester has thrown 9.2 innings and given up 15 runs.

- Phil Humber's recent success has inspired millions of other people with silly names to come out of hiding and try to make something of themselves including Dr. Emily Goatmuffin who is working to cure Funyons.

- Having failed with the cottage cheese-based strategy, sources say Ozzie Guillen plans to force his players to improve through the use of extreme personal nudity.

- A popular Cy Young pick at the beginning of the year, it wouldn't be fair to say Jon Lester has disappointed this season, but his chances to finish as the best pitcher in the American League seem dim. Currently, according to fWAR Lester is tied for the 23rd best pitcher in the AL with Freddy Garcia and Jeff Francis.

Partly cloudy yet party sunny. Winds blowing in your face regardless of where you're walking 15-20 m.p.h. Game time temperature between 214 and 3 degrees.

- The Andrew Miller Experience is now like a super low fare airline. Sure, it's cheap but it's unlikely you're going to get what you need out of it and the end result is likely to be you about 350 miles away from where you're supposed to be covered in diet soft drinks and pretzel crumbs swearing that next time, next time!!, you won't make the same mistake.

- Here's a chart detailing the evolution of my feelings on Andrew Miller: 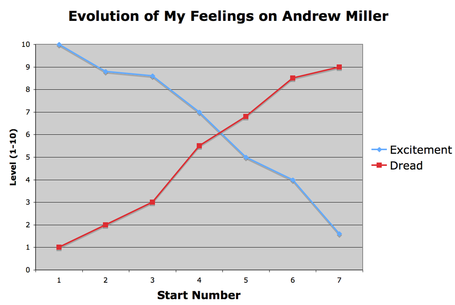 - The sad part about this match up is that even Mark Buehrle's beard is way better than Andrew Miller.