My Moment Of Not-Fame: "Will Venable" And The Waiter

Share All sharing options for: My Moment Of Not-Fame: "Will Venable" And The Waiter

I was fortunate enough or, depending on how you see it, unfortunate enough to be in the Fenway stands for last night's game/debacle/poopfest. Due to what I thought would be a flight departing on time (cue laughter) I was forced to leave during the second rain delay in the third inning. However, before I departed, I was part of possibly one of the most important events to occur in this century. I will now tell you about it. Brace yourself.

I almost caught a home run ball! Like, seriously!

As the gentleman sitting next to me at the game said, John Lackey began the game in John Lackey fashion. This meaning he allowed a homer to something called "Will Venable" who, I later learned, had never homered in the majors before. "Will Venable" and I were alike in that way until a 2-2 cutter was left on the center of the plate by Lackey, whom I will now call The Waiter because he leaves things on the center of the plate. 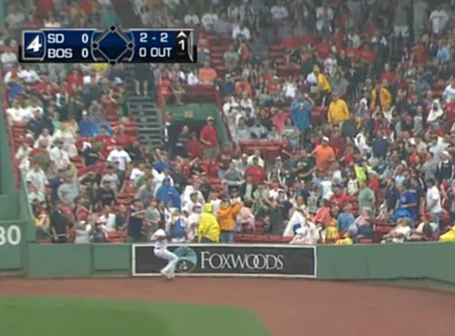 You can see Mike Cameron pulling up as the Waiter's pitch was served into the stands. The ball landed amidst the communal commotion above the crossed O's in "Foxwoods". The man in a green t-shirt directly behind all those raised arms is the guy who commented about Lackey. Godspeed, Green T-Shirt Guy, where ever you are! Your humble author is the man in white directly to the right of Green T-Shirt Guy, and as it stood, directly in front of where the ball landed.

Because this whole thing is ridiculous, here's another screen shot, zoomed in a bit, with a red box denoting me (click to increase hugeness): 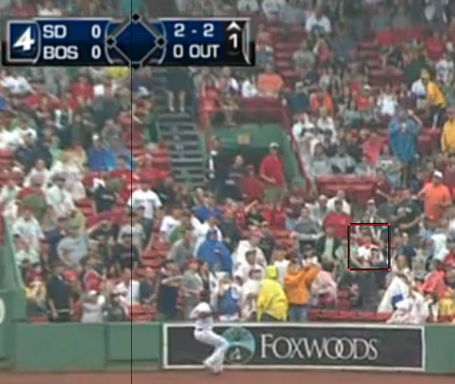 See? Incontrovertible proof I attended yesterday's game and was almost, ALMOST!, the recipient of a home run ball. Unfortunately the dullard in front of me displayed hands of steel and succeeded only in redirecting the ball away from yours truly. Stupid dullard.

On a positive note, the gentleman who ended up with the ball was asked by a member of the Padres bullpen to trade. He punctuated his request by sticking out his pinky finger and thumb and turning his wrist back and forth while shouting, "Hey! Switch?" The fan with the ball obliged and a few moments later was rewarded with several autographed baseballs which he dutifully handed to the two kids sitting next to him.

It was an odd sensation, watching the ball off the bat flying towards me, getting bigger and bigger and at a certain point knowing that it's going to land very close to my seat. Kinda makes my palms sweat thinking about it. I've never been the recipient of that special moment where a ball leaves the fantasy land of a game, breaks through that invisible barrier into real life, and lands in your hands. This despite going to roughly a billion games in my life. For a few seconds I thought yesterday would be that moment. Unfortunately it didn't quite make it's way to me. I guess I'll have to keep going to games. Drat.