Share All sharing options for: My Book Report- Pinstripe Defection

This is the first of what I hope will be a semi-regular series reviewing books on baseball, especially those that are relevant to the Red Sox, here at Over the Monster. There is an endless supply of great writing on the sport and I would like to do my best to honor it and help spread the word.

Pinstripe Defection from writer Clay McKinney is a fascinating David and Goliath tale, pitting lawyer Jason Browning against the high-powered attorneys of the New York Yankees in a case dealing with the dark, hidden world of international baseball scouting and signings.

The book follows the legal proceedings revolving around the strange signing process used to acquire Michel Hernandez, a Cuban catcher coveted by the Yankees. In unraveling the case of a disputed contract, McKinney touches on the dangers Cuban players faces as they defect to pursue life, liberty and baseball fortune in America and glimpses the often unsavory dealings teams undertake in their quest to get at baseball’s largest untapped mine of talent. 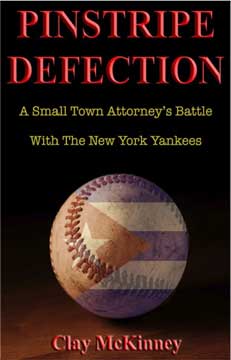 The story begins with the chance meeting of attorney Jason Browning, a legal advisor for several agents and an MLBPA certified agent himself and Gustavo Ricalde, owner of the Yucatan Leones of the Mexican League at the 2002 winter meetings. Ricalde tells Jason about a contract he holds that calls for the New York Yankees to pay $500,000 if Cuban catcher Michel Hernandez should ever make the team’s forty man roster. The battle over this contract, its authenticity and the circumstances under which it was created and signed, soon draws in the Commissioner’s Office, the Yankee’s well-seasoned legal team and members of the team’s international scouting staff.

’s book stays close to Browning, his hero in this story, recounting his early relationship with baseball and the path that his love for the game took as it led him to the legal side of the sport. The book follows Browning and his legal proceedings from that initial meeting through the discovery and deposition process very closely. Beyond the tales of Browning’s childhood, the book only departs from the legal battle when provides some small touches of context to the issue of Cuban defection, which is so central to the story.

’s writing is clear and concise. He gives the reader a palpable sense of Jason’s journey from the bars and hotel lobbies of the winter meetings through to the deposition room without becoming overly concerned with such details. He brings to life what might easily have been a tedious collection of legal back-and-forths with great skill, making the case vibrant and intriguing. Though the author clearly sides with Browning, he maintains a fairly even hand in his telling. He resists the temptation to draw devil’s horns on the Yankee’s attorneys even as he sets them strongly against his small town hero. So, while the story is clearly one-sided in its telling, it is not sensationalistic or unreasonable biased.

The main flaw with Pinstripe Defection is the lack detail and development outside of the specifics of the legal proceedings. While can bring life to Browning’s journey through the case, he does not fair as well in bringing to life the circumstances of Hernandez’s defection or the signing of the disputed contract. This leaves the reader with a desire for more. The story’s most intriguing aspect, the life and death saga of Hernandez’s escape from , is only briefly touched up with disappointingly few details to make it live and breathe for us. The path of Cuban baseball players from the National team to the major leagues is central to the story, but it is not well illuminated here. We are given only the machinations of Hernandez’s flight, subsequent scouting and signing, and the convoluted path to being admitted to the , with most of these details coming in the formalized context of deposition testimony. This side of the story cries out to be given more attention, more detail and more time.

That aside, the book makes for a good read. The narrow focus and singular point of view keep this book from being essential reading on the world international baseball scouting, but as a legal drama, Pinstripe Defection succeeds admirably. Red Sox fans will need little convincing to root for Jason Browning as he goes up against baseball’s wealthiest team, but even the most die-hard Yankee fan would find it hard to begrudge him of their admiration after reading this book. . Red Sox fans who remember the circus surrounding Jose Contreras’ defection, might enjoy a look into another defection case and gain a bit more perspective on players like Contreras or Sox prospect Juan Carlos Linares.   brings life to legal battle and takes the reader through the case details in an exciting and organized manner. If you are interested in international scouting or in the legal side of the sports world, this book will definitely appeal to you.

You can purchase Pinstripe Defection here.