Share All sharing options for: Red Sox Defeat Mets On Gameday: A Not-A-Recap

Not a whole lot of people saw Thursday's game. Or heard it. Or have anything more than circumstantial evidence that it was actually played. That's because the game wasn't broadcast on TV or radio, leaving us with only the most depressing of options: Gameday. And while the photos that are now appearing in the story editor's pool tell me that the Sox were not only playing baseball, but doing so in their traditional green St. Patty's Day uniforms, somehow that just doesn't really do me much good when confronted with this: 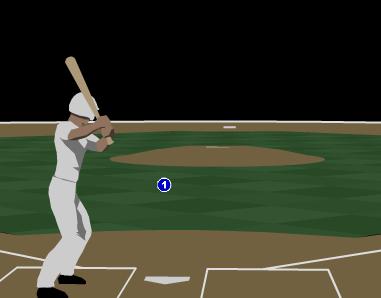 Actually, I cheated a bit there: That's the Mets' Scott Hairston. If you don't recognize him, it's probably because the Mets were wearing green hats. Unfortunately, John Lackey's slimming down has continued to the point where he's no longer visible at most angles.

Still, though, Gameday does convey the basics. And here they are:

And that's about it. Tomorrow's game against the Tigers is also not currently showing any coverage, which begs the question: If Adrian Gonzalez hits a home run, and nobody is around to hear it, does it make a sound at all?