Saved for the Save: Papelbon and reliever usage

Share All sharing options for: Saved for the Save: Papelbon and reliever usage

With Jonathan Papelbon leaving on the wave of a 4 year/$50M deal with the Phillies, the question of relief usage has been thrust into the forefront again. How you view Papelbon’s deal has a great deal to do with your view of the role of a relief ace. The camp that sees saves as a strong measure of relief pitcher worth and values a lock down closer tends to view this deal as a major win for Philly and a huge blow to . On the side of the equation, those of us that see saves as a poor measure of value and would seek a more flexible usage pattern for the best relievers, tend to see this as a major overpay.

There is no question about Papelbon’s ability. He is an elite pitcher perfectly suited to late inning, high leverage work. The major point of contention is how he is used and how much value he can contribute in that role. A pitcher who is only used in save situations will pitch a very limited number of innings over the season, approximately 55-60 innings, maximum. No pitcher has been used quite that conservatively, since nearly all managers will also use their closer in the top of the ninth at home in tie games and at some point in extra innings. However, there has been a distinct movement toward save-oriented usage in recent years and surprisingly; the Boston Red Sox have been right at the front of that movement. For a team known for their progressive approach, used Papelbon, their best reliever, in strict accordance with the save situation. 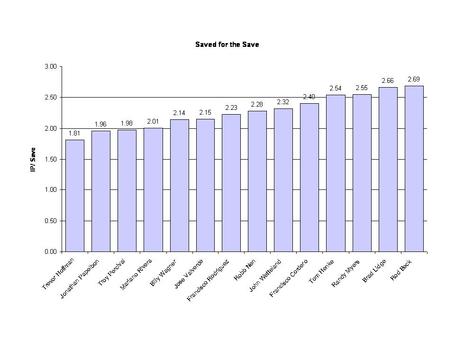 This chart shows the 15 players with the lowest ratio of relief innings per save*.  The trend is pretty clear. The players with the lowest averages are all either active or recently retired players. Aside from Trevor Hoffman, no relief pitcher in history has been used in closer accordance with the perimeters of the save than Jonathan Papelbon. A few players such as Eric Gagne and Billy Wagner have been used even more exclusively for the save situation than these raw numbers show since they have also spent significant time in setup roles but the overall point stands: Paps has been used for saves and little else. As such, he has thrown a very low number of total innings, capping his value.

Jonathan Papelbon’s prominence among the most "Saved for the Save" players could have a number of possible explanations. It is possible that had been playing toward the league’s bias toward saves to play up Papelbon’s value (a la Moneyball). If that was the case, it seems to have back fired slightly since Papelbon priced himself out of and the team never capitalized on that inflated value beyond the first round draft pick they will now receive. Alternatively, it may have been entirely Terry Francona’s choice. Tito was not extremely progressive in his bullpen management and he may have felt most comfortable sticking with the more widely excepted role for his best pitcher. Theo Epstein might have been on board as well, after suffering the bullpen woes of 2003. Health concerns may also have played a role. Papelbon was healthy throughout the majority of his tenure in and his limited workload may have helped in that respect.

Historically speaking, this usage has not been the norm for top relievers. The five Hall of Fame relievers average almost two and a half more innings per save than the group above. Dennis Eckersley has the lowest number of any of the hall of fame relievers with only 2.37 relief innings per save. After his days starting, he was used almost entirely in the same way as the group above. The other Hall of Fame relievers are all over 3 relief innings per save. This seems to argue against the health perspective as ’s reason for the limitation on Paps usage. If other relief pitchers, both now and historically can handle 90-100 innings, we can expect the top relievers to do as much. It seems very odd to me that the team who had employed Bill James would stick to a usage pattern he had famously shown to be sub-optimal, risking wins in the process.

With Tito, Theo, and Papelbon all residing elsewhere, 2012 might be a turning point for in the way they handle relievers. The presence of Alfredo Aceves gives the bullpen a player who can handle high leverage late innings, multiple innings and even spot start work. Daniel Bard has pitched in most high leverage situations outside the save situation for the past two years and he will certainly continue to see key late inning work. In finalizing the bullpen, Ben Cherington may signal a new direction with his choice of players. If he chooses to acquire the proverbial "proven closer" such as Ryan Madson, Heath Bell or Francisco Rodriquez, the Red Sox would seem to be sticking with the save-based model. However, if Cherington moves towards pitchers like Darren Oliver and other relievers used to more varied usage, may be changing directions toward a more flexible role for their best relievers.

The departure of Papelbon goes beyond the question of who will close for . Right now, the real question is: will continue to seek out closers at all?

* Players who pitched significant innings as starters are omitted here. Of those, only Dennis Eckersley would  make the chart above, with an estimated 2.37 relief innings per save by my calculations, ranking him just below John Wetteland.