I'm used to seeing a lot of advertising in my inbox from the Red Sox. Things like events at Fenway, tickets on sale, and the bricks they have been selling all season long. Those things are fine, because hey, at least it's relevant to baseball, if not directly, then at least in a way where you can make an argument in favor of them. But this particular item that showed up in my inbox this afternoon is just ridiculous: 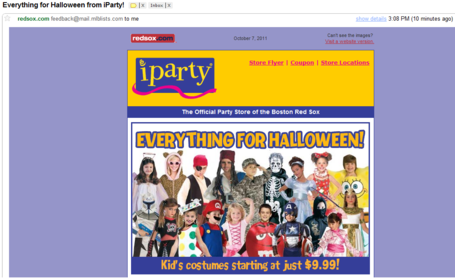 It's the official party store of the Red Sox, you guys! There are coupons and discounts there, as well, which serves to justify this email for the many people who are both (1) Red Sox fans and (2) in need of Halloween costumes, but for those of us who would like Red Sox emails from our Red Sox newsletter sign-up, it's just a tad aggravating. While I'm still ticked they collapsed in September and didn't make the playoffs this year, I don't need their emails to be this off topic, to the point of aggravating me.

As a postscript, if they were in the playoffs right now, this would still bother me.