Following the collapse, players and management were left bruised and exposed after repeated attempts to throw everyone, including owners and neighboring chicken shacks under the bus.

Perhaps it is not a proud time to be a Red Sox fan, knowing that the collapse of the seasons rests in the greasy hands of three pitchers who loved eating and drinking a bit too much.

But framing the Red Sox players in a negative light just for their drinking/eating habits seems naïve and unnecessary.  Sure, they are paid athletes and at time made unprofessional decisions, the truth remains that throughout the history of the sport there have been players with vices… which led us to compile "The All-Vice AllStars."

The All-Vice Allstars is comprised of players that were known for their antics on and off the field—whether it be alcohol, drug-abuse, violence, infidelity, or outbursts. Coincidentally, some of the players known for their bad behavior are some of the best to ever play the game, raising the question if vices hinder ones ability to play the sport. 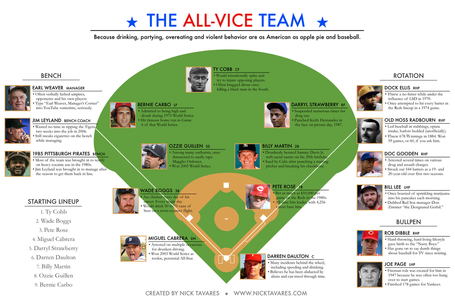 For example, in 1970, Dock Ellis had been visiting with friends in Los Angeles before a series against the Padres. Legend has it Ellis took LSD, then his girlfriend read in the paper that he was scheduled to start in the game that evening. Ellis pitched a no-hitter, admitting in 1984 he was ‘so far gone’ he could not even feel the ball or clearly see the batter or catcher.

And while drinking on off days in the clubhouse seems questionable, what about pitchers like Joe Page? The Yankees INVENTED the fireman role solely because Page was a drinker and needed the early innings to sober up. Page’s partying changed the face of the game: let that one marinate a bit.

Another complaint in the 2011 collapse surrounds John Lackey’s attitude on the mound—brooding, angry, and full of steely glares. But when those temper tantrums are compared to Ty Cobb assaulting a heckler in New York, Ozzie Guillen who once threatened to… violate… Miguel Cabrera, or Bill Lee’s meltdown in the 1975 World Series where he threatened to bite off an umpire’s ear, Lackey’s attitude seems sophomoric and tame.

It’s all about perspective.

Perhaps the rotation is fat and out of shape, but the complaints of drinking and eating habits seem trivial when you consider all of the bacon, chicken, and Miller Lite Wade Boggs ingested during his baseball career, in which Boggs once drank 64 beers on a cross country road trip.

It also seems well documented that baseball players love video games. Even Curt Schilling owns a video game company now that he is retired. But video games seem harmless when compared to the real games Pete Rose played: betting at least $10,000 per game on over 52 Cincinnati Reds games in 1987.

So, the talk of the Red Sox collapse and how it revolved around three pitcher’s eating/drinking habits seems preposterous. While it’s warranted to wonder if the rotation was unsupportive of their teammates during games by being in the clubhouse is one thing, but to insinuate it affected their performance is another. The talk of these troubled pitchers pale in comparison to the "Pittsburgh problem" in 1985, where 10 Pittsburgh Pirates players were summoned to appear before a grand jury for cocaine use.

It would seem that the collapse and finger pointing leads to one real conclusion: some fans want ballplayers to be above the fray. They want them to be athletes that set good examples, play the game "the right way" and positively contribute on and off the field. But the reality remains that even though modern-day ballplayers make millions, some of them are a lot like us—flawed, hungry, and in need of a beer on our off days.

(Links to the aforementioned instances)