OTM Fist Pumpers Five Points Away From Main Event in Baltimore; Send Us to Atlanta!

Share All sharing options for: OTM Fist Pumpers Five Points Away From Main Event in Baltimore; Send Us to Atlanta! 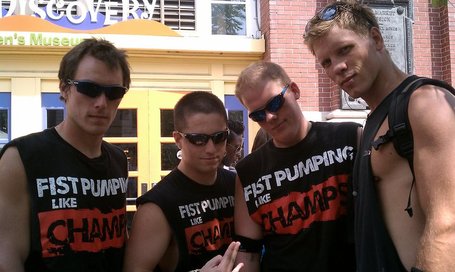 We're normal dudes. Vote for us.

I'm using my one spare moment -- and one spare second of hacking WiFi before mine is installed -- to tell you a story of underdogs. Please read and click the link at the bottom! I need your help!

Saturday in Baltimore was pure heartbreak.

As you saw two weeks ago, Over the Monster was represented in the Boston Cuervo Games. We went out and won the media exhibition, but it wasn't good enough. So we went to Baltimore this weekend to try and compete in the walkon competition to try and make it to the main event.

We were five points away from doing so.

Playing against 15 other teams, we needed to score the most points to enter the final four. We started off hot, scoring a ridiculous 80 points in the "Highwire Harvest" competition. To put that into perspective, we scored 55 points in that competition in Boston. We had 95 total points in Boston -- after all three events.

Then we continued the hot run with a perfect 30 points in the "Barrel Roll." We were also perfect in this category in Boston.

In the final event -- the "Waterfall Climb" -- we did what no other team had done that day: send all four climbers to the top for a perfect score. After this, we thought we were almost a sure thing.

Another team also scored perfect on the two categories. And, just like us, they plucked all the "leaves" in Highwire Harvest ... except they got one more leaf.

We lost by five points. They were sent to the main event, where they promptly were beaten by -- who else? -- a Boston team (that wasn't us, of course).

Needless to say, we were devistated. We played an almost-perfect round of Cuervo Games and we still lost by just one leaf, just five points. Even the people running the show thought we were going to take it in a cakewalk, and this team came out of nowhere to beat us in the last round.

Now we have one more shot to win it and go to Vegas for the National Competition.

Next weekend the Cuervo Games move to Atlanta. Now here's how it works: in the main event, there are four teams. One is a walkon decided that day and three are from Facebook. Those three just need to get the most amount of votes and they get in.

(This brings me to another point: we're underdogs because we're regular guys. The champs from Boston and the guys that won Baltimore are bigger than Barry Bonds in his prime. If there was steroid testing, there may be issues. Just sayin'. If they tested for beer, well, we might fail there BUT ... c'mon. We all would. Let the underdogs go beat the muscle-bound dudes in Atlanta.)

But we have one day -- one day to amass enough votes to go to good ol' Atlanta, win it all, then go to Vegas and compete for the National Title against the winners from all across the country.

Let us get one more shot and redeem ourselves. This time, we'll be perfect.

We only have one day, so vote NOW. Voting ends at midnight. Tell your friends. Pub it on your Facebook feed. If you have a website, put a link there. It's an all-out, grass-roots attack on Atlanta. We were five points away from the Main Event on Saturday, so vote for us on Facebook so we're guaranteed a spot.

Guarantee us a spot on Facebook and we'll guarantee you a perfect score.

Once again, please vote for us for Atlanta. One day -- today, Sunday -- to get it done. It's possible, because I know this community can rally and do big things. I'll even make it sweeter: you somehow prove to me that you got us the most votes -- or at least contributed for a chunk of it -- I'll send you the whole line of Over the Monster t-shirts PLUS we can work with you to make your own. I know it ain't much, but we want to go to Atlanta.

(One more incentive: if the Red Sox aren't going to win this year, why don't we do it for them?)