Is J.D. Drew One Of The Most Overrated Players In Baseball? Players Think So

Share All sharing options for: Is J.D. Drew One Of The Most Overrated Players In Baseball? Players Think So

According to the Sports Illustrated players poll, J.D. Drew is one of the most overrated players in baseball: 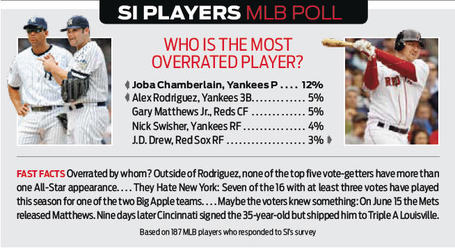 I'm curious what the definition of "overrated" is by these players because Drew certainly is not that.

And as much as it hurts to say, Alex Rodriguez and Nick Swisher aren't, either (as much as I hate both of them). Joba Chamberlain? Sure. Gary  Matthews Jr.? Sure. But not the other three. But especially not Drew.

What say you? Does the poll results look right? Who else do you think should have been in the top five?