Michael Yastrzemski: He's Not The Next Yaz -- At Least Not Yet

Share All sharing options for: Michael Yastrzemski: He's Not The Next Yaz -- At Least Not Yet

There were a few baseball players I specifically wanted to see this past weekend in Cape Cod. Some of them I saw play, some of them I missed, but one I got a pretty good look at is one with a familiar name.

Michael, of course, is the grandson of Red Sox legend Carl Yastrzemski, a name few can spell. Michael played left field for Cotuit on Saturday when it played host to the Yarmouth-Dennis Red Sox.

The Red Sox (the real ones) drafted Yaz in the 2009 draft out of high school, but he chose to go to college. So should the Red Sox go after him again two more years?

Yaz hasn't played in many games in the Cape this season. Fortunately, he did start in left field on Saturday. This is when we thank the Baseball Gods.

More background first, though: Yaz will be a sophomore at Vanderbilt next season. This year, his numbers were pretty solid, but it wasn't anything that really jumped off the page at you. He batted .260 in 131 at-bats with a .347 on-base percentage. He struck out 19 times while playing errorless defense and swiping 5 out of 5 bases.

As you can see, he was all-around solid, but no shocking stats.

On Saturday, Yaz had two hits and scored a run. At the plate, he has a smooth left-handed swing and seems to have a good understanding of the strikezone. He rarely looked bad at the plate and I can't recall him swinging at too many bad pitches. His speed is above-average on the basepaths, but never really put it on display.

As far as his defense is concerned, he was never challenged in left field. I wish I could comment more, but when there are no opportunities to shine, there will be no shining.

The biggest thing that I noticed is that Yaz is small. And it's not so much height. He's listed at 5'10", which isn't huge of course, but he's just not a big kid. He's listed at 168 pounds on the Vanderbilt website. He was most certainly the smallest player on the field for Cotuit.

As just a sophomore, he definitely has time to bulk up, but that is exactly what he needs to do. He needs to put some more muscle and weight on that frame and I think we're going to see a better ballplayer come from it. He's got a couple years to do so and it certainly seems he will.

Maybe we'll hear the Red Sox call Yaz's name again in a couple of years. He isn't at his grandfather's stage yet -- few are -- but he's a fun player to watch nonetheless. 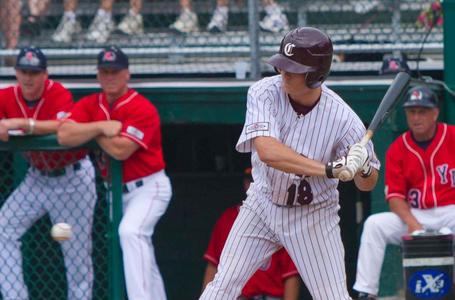