Cape Cod, Day One: I Don't Have Many Notes, But This Will Be Good

Share All sharing options for: Cape Cod, Day One: I Don't Have Many Notes, But This Will Be Good

I've spent one day on Cape Cod and I only have a few notes that are Red Sox-related. Regardless, you're going to hear them all because you love me and my writing that much.

Anthony Ranaudo did not pitch for the Brewster Whitecaps today. He was the Red Sox's third pick in this year's draft. Regardless, he is playing in the Cape because he wants to pitch well so he can get a bigger signing bonus and/or go back to school (he just finished his junior year) so he can get drafted higher next year.

He didn't pitch, but I did find him.

It's not hard to miss Ranaudo. He's the huge guy. Six-foot, seven-inches. I'm down here with my photographer friend Ryan, who I told when we got there, "Look for No. 43." I was sitting in the bleachers when I decided to walk around the Whitecaps' dugout when he said, "I found him."

I walk over to see Ranaudo sitting on a cooler. Even sitting down ... on a cooler ... he is still huge. My first impression? A Bourne player threw a wild pitch to the first baseman during infield practice before the inning started. It almost hit Ranaudo. That was OK. That was cool. No biggie.

But then it happened again.

Ranaudo caught the errant throw with his bare left hand as it whipped past the first baseman. As the ball came toward him, he just stood up and snared it with his left hand. Thankfully, he's a right-handed pitcher. The Red Sox are happy he snagged it with his ungloved glove hand.

"Did that just happen again?" (He repeated this same exact phrases at least two more times. He undoubtedly got his point across.)

Ranaudo, apparently, could not believe that these Cape leaguers would be making errant throws. Not to mention, almost decapitating him and his teammates.

So Ranaudo took action into his own hands: 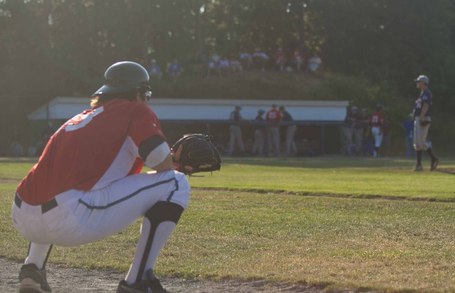 That's Ranaudo with a catcher's helmet and a catcher's glove, ready for any errant throw during fielding practice.

Yeah, that was pretty funny.

I wore my "Laser Show" t-shirt today. I was a little disappointed because I did not receive one single compliment/reaction until about the sixth inning of the second game we attended between Chatham and Harwich. Ryan and I were standing beyond the right field fence when a guy walked by and said, "Laser Show. Relax. Nice."

I gave him the thumbs up. We might be best friends forever.

Then I was at the bar tonight talking to a very nice lady when a large man walked over to me. I thought he was trying to break up my game. Instead, he looked at me and nodded. I looked at him quizically. He pointed at my shirt and went for the "fist pound."

I obliged. He liked the Laser Show.

He said a few more words to me. I didn't understand them because a) he was too intoxicated or b) I may have been following the same road but, nevertheless, we finished with another fist pound and I continued to talk to the nice girl. She didn't know what "Laser Show" meant, but I did not mind.

I'll have more Cape news and notes tomorrow night. If you are interested, I should be blogging at RandyBooth.com with general observations later today. Maybe. Who knows, right? I'm on the Cape, damn it, and I'm going to enjoy it.