Okajima Didn't Walk in the Run, Angel Hernandez Did

Is Hideki Okajima to blame for last night's loss? Maybe Marco Scutaro? Or maybe it's the umpire: Angel Hernandez.

Share All sharing options for: Okajima Didn't Walk in the Run, Angel Hernandez Did

What does a badly called game look like? Let Nick Johnson tell you: 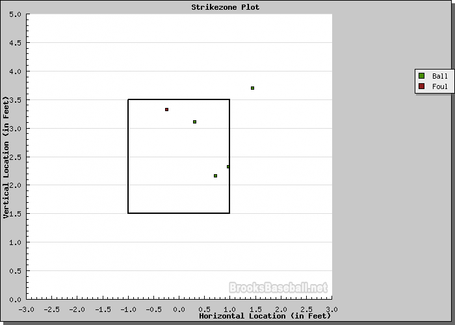 That is Johnson's at bat against Daniel Bard, where he drew a walk despite having Bard throw only one pitch outside of the strike zone.

And how about that crucial plate appearance against Hideki Okajima, where he drew another 5-pitch walk, this time pushing the winning run across? Let's take a look at that one after the jump. 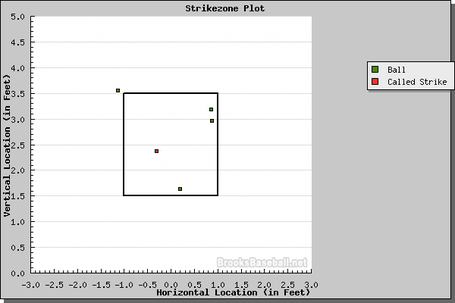 Look familiar? 4 more pitches in the strike zone, 3 more strikes called balls. While Scott Atchison eventually gave up another run to Robinson Cano on a solo shot, that plate appearance is the one that really changed the game.

Undeniably the Yankees got screwed on quite a few calls too. A.J. Burnett had nearly as many bad calls go against him as Jon Lester did, and he tried to even things out with some make up calls in the 9th inning, but by then it was all-but-decided.

It's a cheap thing to do to blame a loss on umpiring—the Red Sox had plenty of chances to score throughout the game and couldn't—so I won't. After all, Victor Martinez drew a walk on what was clearly a strike, allowing Jacoby Ellsbury to score the first run of the game on a Kevin Youkilis sacrifice fly. Questionable decisions like leaving Ortiz in against Yankee lefty Damaso Marte certainly didn't help matters either.

But when the go-ahead run of a game is scored on a bases loaded walk stemming from a plate appearance as egregiously poorly as Johnson's was, it needs to be brought up. Especially since it came from Angel Hernandez, one of those guys who everyone is shocked still has a job.

Hernandez has spent the last 20 years trying to make baseball games about himself. His quick and over-the-top ejections of players, coaches, and "Take Me Out to the Ball Game" singers are the things of legend. Just last night, he routinely refused to call time outs for batters even when requested in a reasonable amount of time. God forbid any of the batters had mentioned it to him—they would've been on their way to the showers in the blink of an eye. It comes as no surprise that the players have no great love for him either.

So why is he still a Major League Baseball umpire?