Along Yawkey Way: 2010 Begins with a Bang

Share All sharing options for: Along Yawkey Way: 2010 Begins with a Bang 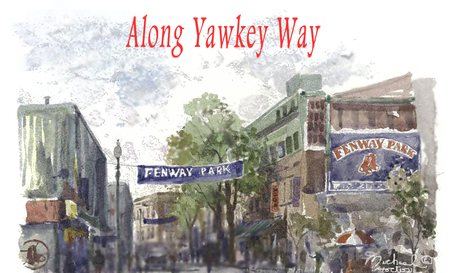 Welcome to the first addition of "Along Yawkey Way", where we will be taking a stroll looking at some of the most recent news out of Red Sox nation as well as a look at the history of our storied club along the way.

First up is a little schadenfreude:

There is nothing like hearing a Yankees fan whining to start the day, especially when they are whining about our Sox whooping up on them.

Looks like the mainstream media is starting to realize that our offense is not nearly as much a worry as previously thought:

WEEI: About that Red Sox Offense

While I`ll keep holding my breath until Big Papi`s OPS is closer to .900, this first game certainly eased some of the offensive concerns of this Sox fan`s heart.

And how about Youk and Pedrioa?

Both of them were simply on fire last night, with Youkilis (3-for-4, 2 2B, 3B, 2 RBIs, 3 R) doing something not done since Carlton Fisk hit 3 extra base hits in the opening game of 1973 (with Fisk going 3 for 4 with 6 RBIs). An interesting historical fact about that same 1973 opening game, which was also played against the Yankees:

This was the first game played with a designated hitter, with Red Sox DH Orlando Cepeda going 0-6! (Big Papi`s night doesn’t seem so bad now does it?) The Red Sox also won this game, 15-6

And as a final link for today I leave you with a heartfelt tribute to one of my favorite Red Sox players of the modern era.. Nomahhhhhhhhhh

Welcome Back and Goodbye Nomahhh