After falling down 5-1 in the fourth inning, the Red Sox clawed their way back to pull of the 9-7 victory over the Yankees on Opening Night.

The Sox were aided by big clutch hits from Kevin Youkilis and Dustin Pedroia. Josh Beckett, on the other hand, struggled in his start and couldn't make it past the fifth inning. 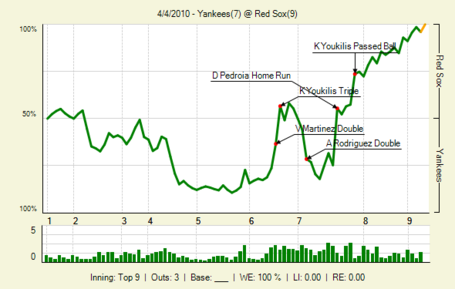 Check out that graph.

Players of the Game:

You can't really choose one over the other, even if WPA wants to give Youkilis the edge. Both were vital to the victory and really lifted this lineup up after it came out sluggish out of the gate. Youkilis, however, should be minus .100 WPA for still sporting the goatee. That's a fail.

On the starter (Josh Beckett):

Beckett was not the ace the Red Sox expected tonight. The velocity on his fastball was solid at 95 mph consistently, but the Yankees just ate it up all night. His curveball rarely hit the strikezone, too. To add more pain to this equation, Beckett was squeezed quite often when it came to strikezone judgment. Combine all these factors and it wasn't looking good for the Sox.

The most alarming thing about Beckett's start was his inability to get swinging strikes. How many did he have? One. That's it. He had one strikeout as well. What does this say about Beckett? His stuff really wasn't that good, in the end. The Yankees teeing off on his fastball is the other good indication.

Everyone go to bed now (if you're on the East Coast). Don't worry, the game actually happened and you can rest easy. Remember: we have 161 more to go!