Jonathan Papelbon Is Smarter Than You Think

Share All sharing options for: Jonathan Papelbon Is Smarter Than You Think

In my time talking with Red Sox fans -- or most baseball fans with a good grasp on Sox happenings -- there's usually a common perception about closer Jonathan Papelbon: he's a good pitcher, but he's not the sharpest tool in the drawer. Evidence? Well, here's some and some more: 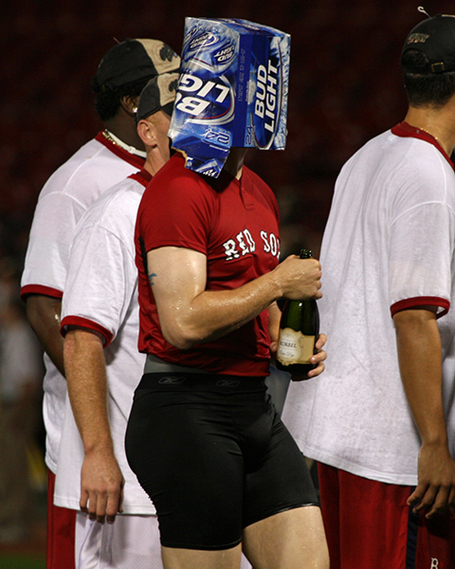 OK, so just because a guy likes to wear empty cases of Bud Light on his head doesn't mean he's not smart. He just likes to have fun. And this, somehow, fits under that umbrella. (I wouldn't do something like this, but I think ... nah, I probably have done something like this.)

But you know what? There is a difference between doing a champagne riverdance, wearing crappy beer boxes on your head, having your dog eat one of the most valuable baseballs in MLB history and being dumb. Because when it comes to Jonathan Papelbon, baseball and his future with the Red Sox, he is the furthest thing from stupidity.

It's easy to rag on Jonathan Papelbon. He has a deep southern accent, a mean-looking stare in at home plate and runs around Fenway Park in his underwear. That makes him a much easier target than, say, J.D. Drew, who doesn't go out of his way to get noticed.

Papelbon, though, should not be ragged on about how he is approaching his contract situation with the Red Sox. Papelbon spoke confidently with reporters in Fort Myers, Fla., Tuesday about what he wants to happen:

Papelbon scoffs at the notion that it's some type of foregone conclusion that he will cash in somewhere else once he has the freedom to do so.

Does Papelbon want a big pay day? Of course. His number one priority is not necessarily making the most money possible, though, but making the kind of money that he thinks he deserves to make. He just happens to think he's one of the best in baseball and he wants that kind of money.

Although Red Sox fans may not want to hear this (because we all like a reason to feel OK if a player leaves), Papelbon is going about this entirely the right way. He isn't screaming to the press, "Pay me!" He's not showing up to camp late and moaning. He's not refusing to pitch or anything like that. He has simply said, in paraphrase, that he understands how much he is worth and that's exactly what he wants.

A key quote from the paragraph above is this:

"Right now, this is the way it's working out. It's that simple. It's one year at a time. It's working out, and both sides are happy."

Papelbon understands the arbitration process fully, and he also understands what potentially comes after that: free agency. The nice thing about Papelbon and this whole contract situation is he's going about it in a calm but direct manner. He's not going to the press and demanding the Sox pay him, which would obviously sour himself even more in the eyes of Sox fans. But he's letting it be known that he wants his payday, but also not making it a huge issue.

The whole aspect of "one year at a time" is interesting. It seems that a lot of players going through the arbitration process would like to sign a long-term deal and not have to worry about the year to year hassle of going through arbitration. Papelbon, though, seems to like proving what he's worth. The better he pitches year to year, the more money he gets and he really, really likes that.

Then once the 2011 season is over and he has compiled whatever stats, he can go out there and get his long-term, big money contract. Maybe Papelbon thinks a contract at this point wouldn't allow him to really get the money he deserves. Once free agency hits, though, he can get that long-term security.

Once 2011 is over, Papelbon will get paid and he will get paid well. It remains to be seen if he will stay in Boston, of course, but at least Papelbon is taking the smart route through this whole thing. That could potentially change this season or next, but I wouldn't count on it considering the way Papelbon has already approached the situation. The bodes well for the Red Sox, their fans and, of course, Papelbon himself.