So really, Scutaro should be gliding in under the radar, and as long as he can perform around his career levels, the fans at Fenway should be happy to have him around.

That's where it gets interesting however, because last year, he did not perform to his career levels- rather than looking like someone who's been stuck as a utility guy, he played closer to all-star levels at shortstop, coupling solid defense with a very impressive bat for the position.

No one seem quite sure how to view this- some people say it's an outlier lucky year and should be discarded, meanwhile others claim that it is due to a whole change in his approach at bat, and that similar results should be expected in 2010.  So, as we wait for pitchers and catchers to finally all show up in Florida, let's take a look at what we can expect from the guy everyone is hoping will stick as our only shortstop for the year.

First of all, since he appears to have revamped his plate approach for 2009, let's take a look at how his plate discipline numbers compare to his numbers the year before (which are much more in line with how he has performed through his career).

The first thing that jumps out is that while he did swing at a few less pitches out of the zone (12.3% as opposed to 15.4%), the most dramatic change in his discipline is actually swinging at pitches in the zone- he dropped from swinging at 63.4% of pitches in the zone in 2008 to only 55.5% in 2009.  This means that the largest difference here is not that he is seeing better when a pitch is going to be a strike, he has learned to be much more selective about which pitches in the zone are worth swinging it.

An expected result of this, which is evident in his numbers, is that he both walked and struck out more than in the past- don't worry though, while his strikeout numbers only went up a minimal amount (.5% difference, really negligible difference), his walk numbers went up from 9.6% to 13.2%- essentially in 2009 he walked 33 more times in only 88 more PAs than in 2008.

Clearly, he has re-evaluated his offensive approach and is not just looking for strikes, but looking for pitches he can hit.  Not only does this result in improved batting stats, but brought him up to an impressive 4.06 pitches per plate appearance- not bad out of the number 9 hole.

Now to quickly address the luck issue- there are a few generally regarded indicators of batting luck- my favorites are BABIP and HR/FB, so let's look at those quickly.  His 2009 BABIP was, as might be expected, higher than his career numbers, but not by as much as some people would think- in fact it was only the second highest BABIP he has posted in his career, at .304 compared to his career average of .289- higher, but not unsustainably higher.  A good portion of that might in fact be because of his improved approach at the plate.

Now, while his HR/FB rate was above his 2008 numbers, they were actually exactly his career average at 5.5%- not too surprising really- while he did post a career high of home runs in 2009, it's not like he was exactly slugging them all the time (he had 12).  This is clearly not a factor.

So it is possible that luck factored into the slight increase in his BABIP, but really, it does not look like it was a measurably significant amount, and more likely the slight increase was because he was swinging at the strikes he could hit better.

Now that we've looked at those two points, lets delve into one more which I haven't seen anyone address so far- Marco Scutaro does not hit well playing on turf- his career OPS on turf is a full 41 points lower than his career average OPS (and it's not exactly a small sample size at 873 plate appearances).  This held true last year, even with his new approach- at home, he batted only .242/.353/.389, which makes his away splits of .322/.405/.429 all the more impressive.  While we shouldn't expect a line that high playing 81 games at Fenway instead of the Rogers Centre, it's not unreasonable to expect to see his offensive line actually increase coming to Fenway.

Here's his 2009 hitting chart from the Rogers Centre: 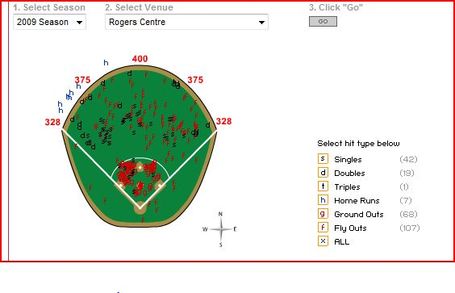 As we can see, the actual dimensions of Fenway probably will not affect him much.  There are a few flyouts here that would turn into doubles against the monster and quite possibly a few home runs that would be turned into doubles, but no significant change.  He should be drastically hurt by the deeper right field as he hit nothing out of the park there.  His swing isn't made for Fenway in the same sense of someone like Cameron, but it certainly won't be hurt, and could boost his BA a couple of notches.

Some people see Scutaro regressing, and while it's possible that he won't perform completely up to his 2009 standards, most of his success seems extremely repeatable and I wouldn't be shocked to even see him outperform his 2009 self in moving away from the Rogers Centre.