In Part 1 and 2 of the trade value series, I focused exclusively on the value of the major league players on the team. Predicting the value of players with a reasonable major league track record is not easy work, but it does produce much more reliable forecasts than attempts to predict the future value of players who have yet to see any time in the major leagues. Even the smartest front offices have trouble doing this. Every organization fields a vast array of minor league players as a result, and shifting through the numbers across different league environments and player levels is daunting even to the most experienced analysts.

Fortunately, there has been some excellent research done by organizations like Baseball America, SBNation’s own Minor League Ball and many others to separate players into some order, prioritize the dozens of considerations teams look at in evaluating minor leaguers and break them down into some sort of rank. In some truly groundbreaking work, Victor Wang of the Hardball Times used the BA rankings and Sickels’ grading to calculate the average value of players who fall into certain ranges within the ranking systems. Unfortunately, neither Sickels nor Baseball has released their 2011 ratings at this point. Rather than just using last year’s rankings, I am making some educated guesses on the Red Sox prospects. As with the major league projections, I am trying to give conservative estimates. Here they are: 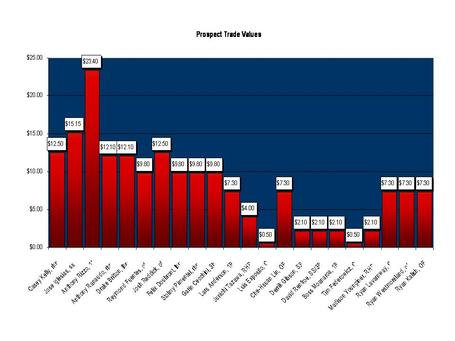 One thing that fans might find surprising is Casey Kelly’s value does not lead the way. In the work that Mr. Wang did, he found that hitting prospects produced far greater value than pitchers, primarily because pitchers busted far more often. The value for Kelly here reflects that, but he can easily be two or three times more valuable if he reaches the majors and translates his potential at that level. Anthony Rizzo looks like a safe bet to be ’s highest ranking hitter and therefore their most valuable commodity right now.

Josh Reddick and Ryan Kalish may well be more valuable in the near future, but both are less well liked by the prospect mavens of the world after last season. Jose Iglesias has seen his stock rising this year despite a lot of the concerns scouts had about his bat. He is already seen as a top-tier defensive player whose glove is major league ready. He takes a hit in his value as the Red Sox have him signed to a major league deal already. Another player who is rising through the ranks is Ryan Lavarnway. The young catcher was dominant in the Arizona Fall leagues and might even crack the BA top-100 as a result.

If there is one player who I am sure is radically undervalued here, it is Ryan Westmoreland. After missing a full year of baseball due to a brain surgery, the former top-20 prospect is likely to fall off the list entirely this year. However, recent updates suggest that he will be able to return to baseball without any lasting effects. If that is the case, Westmoreland could easily be a top-10 hitting prospect by this time next year, tripling his value to the organization.

I will have a revision of this chapter when the official rankings are available, but I think these are solid conservative estimates. The Red Sox have a lot of valuable pieces in the minors and clearly deserve their reputation for farm system depth and quality. In particular, they have done an amazing job in developing pitching. If top pitching prospects like Kelly, Anthony Ranaudo and Drake Briton make it all the way to Fenway, they can match players like Clay Buchholz and Jon Lester in value.