The Particular Case Of Lars Anderson

Share All sharing options for: The Particular Case Of Lars Anderson

No prospect in the Red Sox system has seen his stock plummet more in the last 2 years than Lars Anderson. Coming into the 2009 season as the system's top prospect, the California native struggled mightily to hit AA pitching and went from being ranked Baseball America's 17th best prospect to the 87th. He wasn't even the organization's top prospect anymore: Ryan Westmoreland and Casey Kelly became the "top dogs" in the system. In  the 2010 season, he continued to face adversity, as he struggled to hit AAA pitching. For the first time in his Minor League career, the first baseman wasn't in the organization BA's Top-10 Prospects list and questions about his skill set started to emerge: He lacks loft in his swing, poor contact skills, lack of athleticism...Some prospects commentators started even to question his make up: Thinks too much, too "cerebral" (the kid was committed to Berkley after all), Some of them--commentators,that is--even questioned his commitment to baseball...

The Adrian Gonzalez trade, locking the corner infield positions, made Lars Anderson the most expandable top prospect in the system but the question now is "Should the Red Sox move him to acquire some bullpen help or other pieces of need?". I think they shouldn't because trading him now is selling low. I also think  that he's due for s big rebound soon and could be, by the end of next season, a serious candidate for the 1B/DH spot.

There's 2 elements we tend to overlook when we look to Lars' numbers:

If Lars Anderson went to college and came out after his Junior year, the 2010 season would be his first full season of professional baseball. He would probably have played some games in the New York Penn League (Short Season ball) then moved to finish the season in Greenville in the South Atlantic League (Low A). Instead of that, he was called up to the big club after having 2 solid months of offensive production in AAA:

At the Major League level, he showed a good batting eye (16.3 BB%) and sure hands and a good range at first base to the point where Francona used him frequently as a defensive replacement in the late innings. Again, this is a prospect who just turned 23 two months ago and looked like he was starting to figure out the Triple-A competition.

I admit that, even when you consider the age advancement scale, Anderson's case as a top prospect remains underwhelming: After all, he just finished his 4th year in the Sox farm system and he's not putting great numbers like Brandon Belt (Giants) or Logan Morrison (Marlins) both turned 23 and have an OPS north of the .900 figure at AAA. Well, this leads me to the second point of this story:

Here's what Anderson's Scouting Report at SoxProspects.com has to say:

Tall slugger with a great hitter's frame, good present power, and a high power ceiling.  Extremely smooth and fluid swing.  Impeccable batting eye with very good patience at the plate - he actually could stand to be more aggressive. Hits especially well to the opposite field, but can also pull the ball on occasion.  Hits the ball on the ground too much and has yet to add enough loft to his swing to become a big time home run hitter. Strikes out  too much, particularly against off-speed stuff from advanced pitchers. Has shown a few streaks where he struggles at the plate for weeks at a time, occasionally looking overmatched. Not a stolen base threat, speed is below average. Athletic for his size, plays average defense at first base.  Digs throws in the dirt well.  Makes some nice diving plays, but still can look awkward at times. Mediocre range. Takes instruction well and learns fast.  Strong work ethic.  Intelligent and confident. Has been fairly age-advanced at each level he's played at during his professional career. After making adjustments at each level, he been able to sustain a solid approach at the plate with the ability to drive balls in the air.

Those of us who follow the prospects closely have heard/read about how Lars' swing was tailor made for Fenway since he was drafted: Members of the Front Office and Scouts were raving about his opposite field power potential and here's his Spray chart in ML:

You could clearly see that his natural stroke is toward Left Field as the majority of the fly balls he hit went the opposite way. Apparently, the sluggers with that particular skill develop differently, and are viewed less favorably early in their careers, than players with obvious pull power: Take a look around the league and you'll notice that Adrian Gonzalez (Opposite Field ISO: .403), Joey Votto (Opposite Field ISO: .492), Ryan Howard  (Opposite Field ISO: .523) weren't dominating opposition in the Minors at an early age like you expect them to be:

You can also notice when you look at the list below some notorious late bloomers: Edmonds, Franco and Clemente. 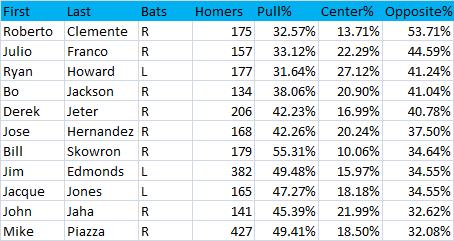 If you look at Votto's Minor League numbers, they look very similar to those of Lars. Actually Lars is a year ahead in terms of age advancement to where the Reds 1st baseman was:
Joey Votto finished his age 22 season in Chattanooga (Southern League - AA) with a combined MiLB line:
Here's Lars Anderson's MiLB line till age 22:

You should notice that the small difference between them is a result of a more favorable BABIP for Votto. All other indicator: BB% and IsoP are very close.

Don't give up on him yet!