In Part 1 of this series, I ran down the surplus value that each pitcher under the Red Sox control would have in a trade. This installment does the same for the Red Sox position players. Once again, I am using the excellent trade value calculator developed by Sky Kalkman of Beyond the Boxscore and my own very basic projections for Wins Over Replacement (WAR) for each player during their current contract years. Here it is: 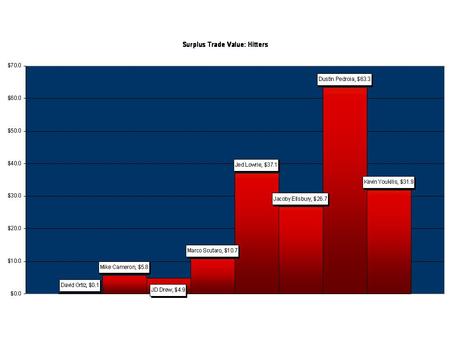 To absolutely nobody’s surprise, Laser Show tops the list. Dustin Pedroia’s current contract is just about as team-friendly as they come and his value, even in my ultra-conservative projection is pretty massive. I was a bit surprised that Kevin Youkilis didn’t rank higher, but his deal, while very good for the Sox, is much closer to his market value than Pedey’s. He is also under their control for one less season, which makes a big difference. With both Youk and Pedey, I should just call this their surplus value, since trading them is a ridiculous idea. These are cornerstone players. If they are on the field, the Red Sox have the start of a great team.

Jed Lowrie and Jacoby Ellsbury are the team’s top two trade pieces right now and they seem to pop up in every rumor we hear. Given the potential that they have and their low cost, they aren’t easy players to give up. They are also the two most difficult players to project going forward. Both are young and have shown high levels of performance in the Majors but both have suffered serious injuries recently and have question marks surrounding their position and their defense. In projecting them, I am making the assumption they stay healthy and perform around their established levels. If they do, they will make it very hard to match them in value over the next three years with a single player. To move these two, the Red Sox need to get an established star, period.

Another big surprise for me here is Marco Scutaro. His contract makes it pretty easy for him to give his team solid value in 2011. I think he absolutely will be traded this off-season. has Lowrie now and Iglesias on his way up. They can package Scutaro with other players or trade him alone for a prospect or two very easily. Any competitive team that needs a shortstop or a second baseman would be a good fit.

The rest of ’s position players under contract are at more or less market rates. Cameron, Ortiz and Drew are all being paid essentially exactly what they are likely to be worth. I think that speaks well of Theo and his team. Of the three position players signed as free agents, two (J.D. Drew and Mike Cameron) are pricy, but not overpaid and one (Scutaro) is a pretty good deal. Of the position players under extensions, only Ortiz, in his very last year of his contact, is something less than a fantastic value. I am not sure if this means that the front office is vastly superior in its ability to evaluate hitters or if it means we should have more faith in the contracts tendered to Josh Beckett and John Lackey. We can be fairly sure though, that if they do sign a pricy free agent like Jayson Werth or Carl Crawford, they will not overpay.