While working on the Hitter's trade value piece, I realized I had made a mistake in the original projections for the Red Sox pitchers. The corrected version has been added here. The final version has slightly different numbers, but the outlook stays pretty much the same.

Since the recent announcement that the Diamondbacks will entertain offers for rising star Justin Upton, there has been no shortage of rumors and speculation. As Dave Cameron at Fangraphs pointed out, this would be a very unique trade. Young, cost-controlled players are a rare thing to find on the market and has nearly as much surplus value as anyone (Cameron estimates a minimum of $50M). This has gotten me thinking about the trade value of the Red Sox players.

Luckily, the excellent work of Sky Kalkman has made it pretty simple to look at these issues. I took all of the players on the Red Sox who are under contract beyond 2011 and ran them through his excellent trade value calculator. Now this tool is not meant for estimating prospect value, so there is no Casey Kelly or Felix Doubront here. I will discuss the prospects value in the final part of this series. Without further ado, here are the pitchers' trade values: 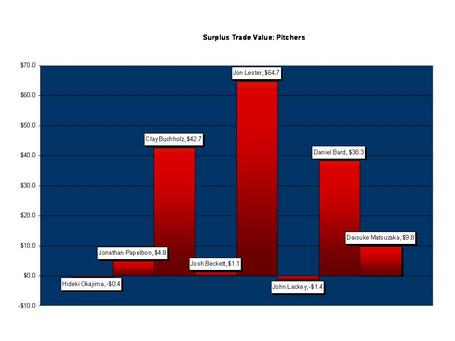 A few quick notes on the method used here are in order. In order to use the calculator, you need to estimate wins above replacement. This is no small thing. I am certainly not Bill James or Sean Smith and I do not have my own projection system, enabling me to call up the future WAR of any player with ease. Therefore, I have used the past three seasons of fWAR data averaged with the standard 3/4/5 weights applied and prorated shortened seasons when reasonable to 200 innings as a starter or 75 innings as a reliever (approximately). I have then added half a win to that number if the player is entering the typical prime age range and subtracted if he is exiting. I feel this gives a good, conservative estimate and I think that is appropriate here.  The rest of the calculations are all from Sky’s calculator.

The Red Sox have some pretty impressive value in their pitching staff. It is no surprise that Jon Lester tops this chart. He is simply a steal for thanks to his current contract. Bard and Buchholz are significant values as well, highlighting just how much you get from pre-arbitration players who can perform in the big leagues. Buchholz definitely has the most conservative estimate of any of the players here. He could very easily approach Lester-like value in the next few years if he takes another step forward.

The rest of the tenured pitchers are signed pretty close to market value and this reflects that. In fact, if you do not factor in their perspective draft compensation, Beckett, Papelbon, Matsuzaka and Lackey are all almost entirely without surplus value. Josh Beckett is only one of that group that seems capable of exceeding the surplus value shown here. His brutal 2010 season seriously drags down his projected WAR. A bounce back year in 2011, on par with his 2008-2009 numbers, could put him in the $10M range even with his sizable contract. The really tough news here is John Lackey. It is really hard to believe that he will have any surplus value over the length of his current deal. He is just too far removed from his best seasons to justify his $16M price tag.

Looking at potential trades, I think it is very helpful to have these numbers in mind. For example, I have heard Justin Upton for Bard and Buchholz getting tossed around the hot stove. After reviewing their values, I think that is a pretty steep price. may be worth even up to $100M in surplus value, but he is just one player and there is significant risk that he will not be worth anywhere near that. On the other hand, if Buchholz exceeded my conservative estimates he could be close to ’s ultimate value all alone. There is also just more risk associated with taking the surplus value of two players and trading it in for one. If the Red Sox trade Buchholz for , I think a deal paring Buchholz and prospects makes more sense.